Summer is a great time to small projects. Portable projects you can take on trips, to various functions, or even work on in the car over your lunch break :-). Something small – not like small afghans which make you hot while sewing them together. 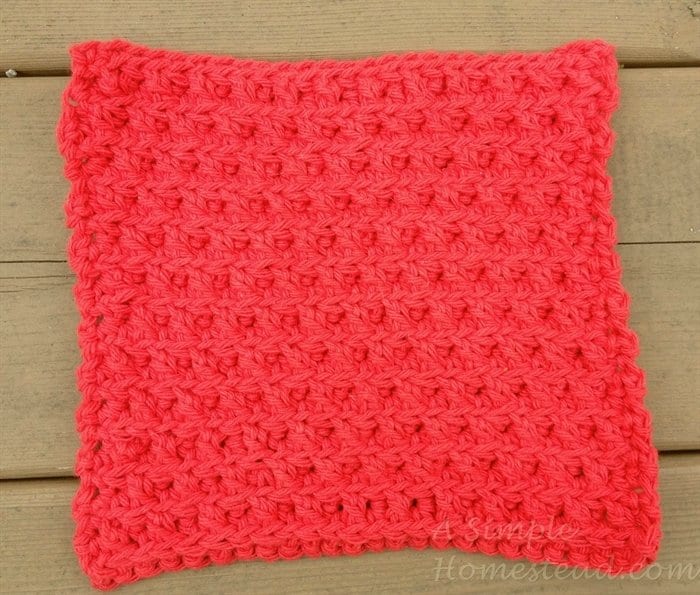 I’m still using up a bunch of my cotton yarn stash. I managed to avoid buying anymore during a recent 25% off sale. The funny thing is, I’m sure there are more dishcloth / washcloth patterns I would like to make than the amount of stash I have! There are just so many different, interesting patterns to play with.

There used to be a Yahoo group called HolidayMysteryGifts – well, actually it still exists, but it’s no longer active. Designers would release 5 – 15 patterns in the group each month and they were only available to the members of that group for the month and then they would disappear. That was mainly done so designers could then release to the general public as a for-sale item if they wanted.

I faithfully saved off the patterns each month, but this is the first time I actually made one of them. It was called Hazel’s Face Cloth by designer Sherry L. Farley. Sadly, I can’t see that she released the pattern anywhere else.

Red is such a hard color to photograph, but hopefully you can see the interesting stitches in this pattern.

KALs/CALs are just as abundant in the summer months as the winter ones. Fortunately :-). I made this knit “market bag” for a contest on Yarnspirations – the Summer Beach Bag Stitch-a-long. (Not sure if this is the same pattern; they removed the original link) I had hoped to make 3 or 4 of the 6 bag patterns they featured (3 knit, 3 crochet), but this was the only one I finished. 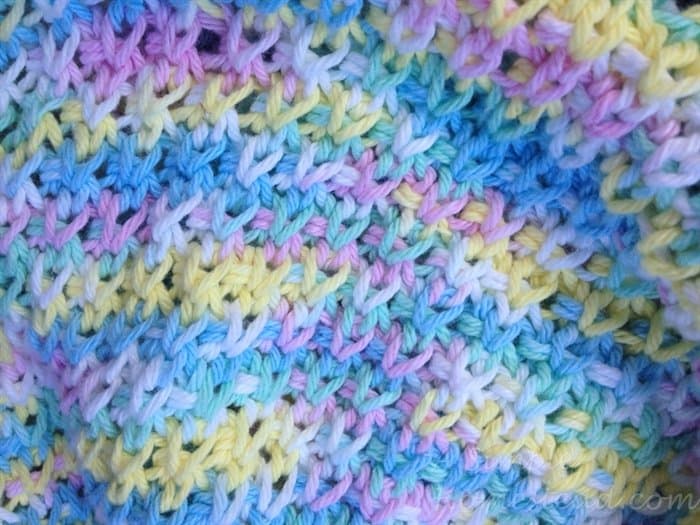 It works up quickly because you are using large needles. The bag should have been even more “holey” but it called for US 15 (10mm) needles. My needle stash only goes up to US 11 (8mm). Thankfully the instructions say to knit until the bag is a certain length so mine didn’t end up smaller. The handles seem extra long though; not sure what happened there. I think it turned out cute – I love the fun, spring-like colors and it used up quite a bit of one of my cotton cones! 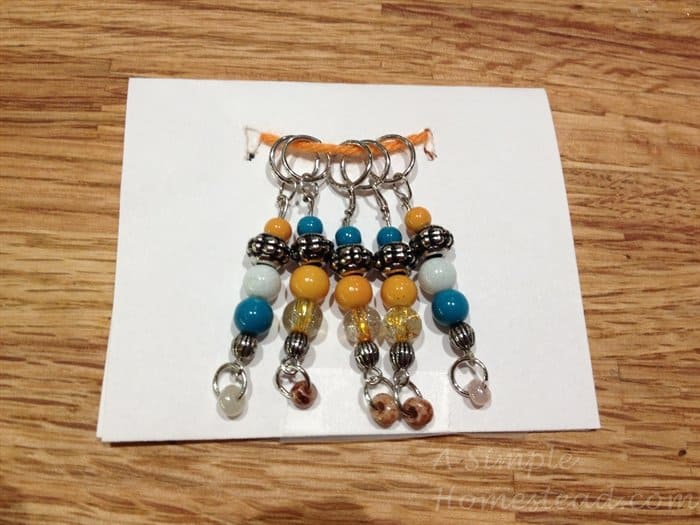 I found a fun group on Ravelry (as if I don’t follow enough) called Random Acts of Kindness. Each month new topics are started where people can post requests of items they would love to receive. There is no guarantee they will get anything, and those people that are fulfilling the requests can’t expect anything in return other than a “thank you”.

There is always a birthday wish list for people that have birthdays that month. I found a couple of fellow Ravelry crafters that had birthdays in July (just like me) and fulfilled their wishes.

One person was looking for Caron Simply Soft yarn – even scraps to make charity hats, along with fun buttons. I was able to fill a box with some partial skeins and small balls to send off (didn’t make a dent in the stash!)

Another person was looking for some flesh-colored yarn (again, scraps were ok) to make charity dolls. I sent her a partial skein of Aran-colored Red Heart Super Saver that was so scratchy I couldn’t stand it. She also asked for small bits of sock yarn – only 8 or 9 yards. I found a few smaller scraps to send off. She also was looking for stitch markers so I fulfilled that request too :-).

Sadly though, I think my stitch-marker-making skills are deteriorating. I had a feeling the wraps at the top weren’t as neat as they were in the past, and I had it confirmed this past weekend. I was knitting with a friend and she whipped out a stitch marker. I was impressed and asked where she got it. Um … I gave it to her a couple years ago. I think I need to revisit some tutorials on wrapping again because my latest ones don’t look as nice.

As for me, I submitted a list of birthday wishes too and someone gifted me this pattern: 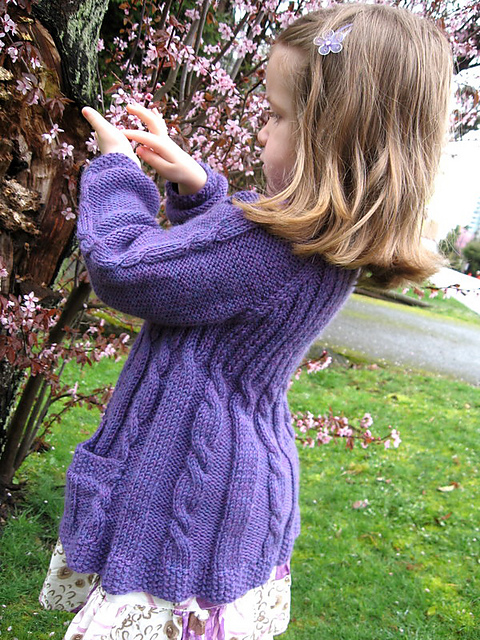 (click on picture for pattern)
I already owned the adult version of this pattern, so I’m hoping I can make a mother-daughter set.  Probably not in the same colors though.