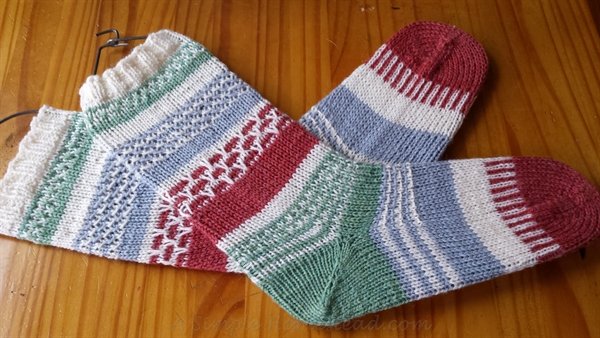 There probably is a story about Christmas and Crickets (update: The Cricket on the Hearth), but the crickets I’m referring to here are related to the fact that this site has been silent the last couple of weeks. 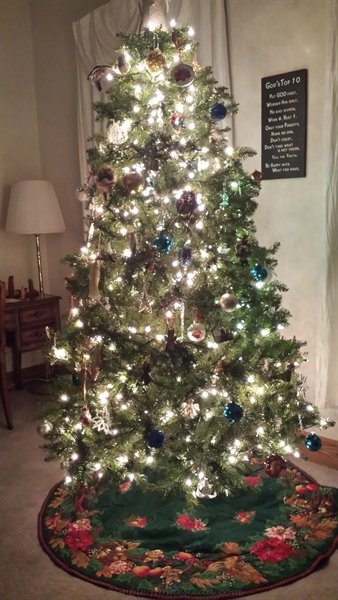 We celebrated an extended Thanksgiving weekend with family, decorated Christmas trees in 3 locations, attended a birthday party, planned one of our own for a soon-to-be-6-year-old. At the same time, Mom has been trying to stay on top of work commitments with 3 days of training, home commitments (sometimes the house needs cleaning, bills need to be paid, etc.), planning for Christmas, and usual frantic gift knitting and crocheting!

One Christmas gift has already been delivered. My sister had requested some “crazy socks” … and there was a Designing KAL. That was good because it set the deadline earlier than 12/25. I call these the Cliffs of Insanity socks (The Princess Bride reference) – because they were insane! Four different colors, six different slipped stitch patterns, and striping that was pretty much random. She got them early (Thanksgiving weekend) because
1) They were done.
2) I was excited about how they turned out.
3) She was due for an early gift after all the years of Christmas I.O.U.s 🙂

I’ve been working on some mystery gifts, including this … er … knit thing that I can’t tell you about, but I’m thrilled at how it’s turning out.  I know the recipient reads my posts so I have to be careful on how much I say! 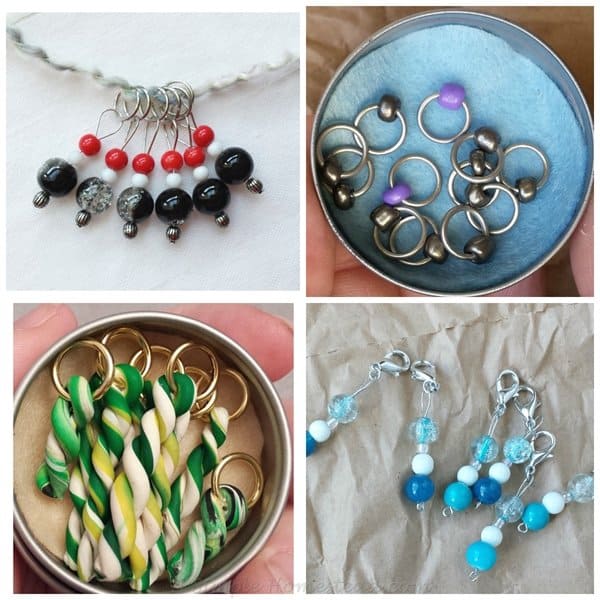 I purchased some cute little tins to make my stitch markers more appealing (hopefully) and have added a few more to the Etsy shop. On the designing side of the business, I haven’t done much of anything. I signed up for the Indie Designer Gift-A-Long and am making a couple of projects from other designers. I plan to start fresh and get some new designs published early in 2017.

I also have some miscellaneous projects that were completed in the last few weeks. I made one pair of socks, thinking I was going to give both sisters-in-law a pair for Christmas, but Papa has other plans and ideas he wants to do. That’s not a bad thing as I still only have the one pair!

I finished a Maevh cowl by Melanie Berg. For a KAL of course. I was originally thinking of giving it away as a gift as I wasn’t in love with the yarn as it appeared skeined up. But when it was knit?! Holy cowl :-). I love the variations in the pinks, oranges, greens, blues … this one is staying in my closet! My project page is here, if you want more information.

I’ve had some Lion Brand Homespun in my stash “forever”. The plan was to make a prayer shawl with it. I broke down last month and finally got to it. This is my own pattern – one I plan to write up formally very soon. I had four skeins and only used a little over two skeins, so I made a hat that will also go to charity. The rest of the yarn was donated to my local yarn store (LYS) into their stash basket. I have to say I’m not a big fan of Homespun, although it does make a super-soft shawl.

My latest finished project is a doily I’m giving away as a Secret Santa gift. The gift exchange starts next week but I haven’t finalized which day she’ll get this particular gift. I had to be careful on how many homemade gifts to give, as she knows I’m an avid (rabid?) knitter and crocheter. That means it might be safe to only give it to her on Friday – our “reveal” day. This is the Two-Toned Doily (aka Gift Doily) I’ve made several times before and I know it works up quickly. I picked Chicago Bears colors because she is a big Chicago fan.

Are you busy with any Holiday projects? I’d love to hear about them!