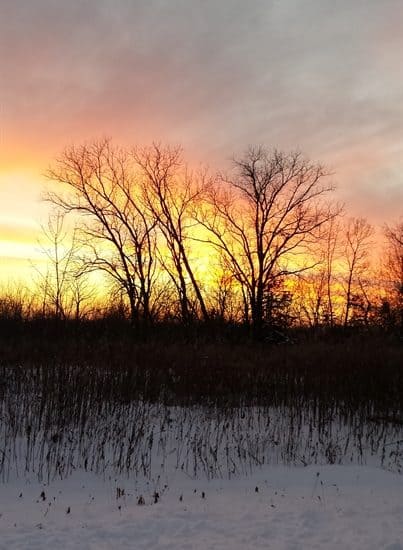 Officially winter doesn’t start until December 21, but it sure feels and looks like winter around here!

Sunday morning we woke to a pile of snow on the ground. I’m not sure what the official measurements were, but it was at least 6″, maybe 9″. December snowfalls are so pretty, especially when you get that light, fluffy but sticky snow that clings to the sides of trees.

December makes it easier to spot the local wildlife. We’ve seen this pair of does several times in the last week. The closest they’ve come to the house was the day after the big snowfall.

As much as Little Chick likes visiting Florida in the winter, it’s rather hard to build snowmen. (Although my sister did build a sandman one year at the beach LOL)

December also makes for some beautiful sunsets and sunrises.

This was my view, turning the corner right before our house last night. I tried to get a nice shot of the neighbor’s yard with their pine trees loaded with snow and the sunset in the background, but it was getting too dark already. That’s one of the few bad parts about this time of year – the short daylight hours.

Well, that and the frigid temperatures that often follow beautiful snowfalls. This week we will experience single digits for high temps several days in a row. Brrr!  Good excuse to spend your evenings curled up in the lap of someone you love….

… getting your belly rubbed.

Or in front of a cozy fire – ice cream drinks optional.

(Someone recently commented suggesting Grasshoppers were a Wisconsin tradition. Is that true? Anyone outside of Wisconsin had one?  I actually preferred the non-alcoholic cocoa /peppermint stick drink I had the next night)

I may have needed a drink after hosting a birthday party this weekend for a certain newly-6-year-old with 7 of her classmates. It was too cold to go outside so they spent all three hours running around our house! It was occasionally crazy, but we survived 🙂 We had nothing formal planned for activities – they just played: hide-and-seek, throw (soft) stuff off the upper balcony, coloring, games, chasing each other in circles, bouncing balloons, etc. When it got too crazy we distracted them with cake and ice cream!

In addition to birthdays, December seems to bring other parties and gatherings. This week started a Secret Santa event at work I had to plan for. We also had to make sure we sent treats for Little Chick’s classmates, even though the party isn’t until next week. I made up 15 of these little M&M / candy candy bags. Someone is anxious to try them already!

This week we have a bit of a lull before the big festivities at the end of next week.

What do you like about December? Any special events coming up for you?