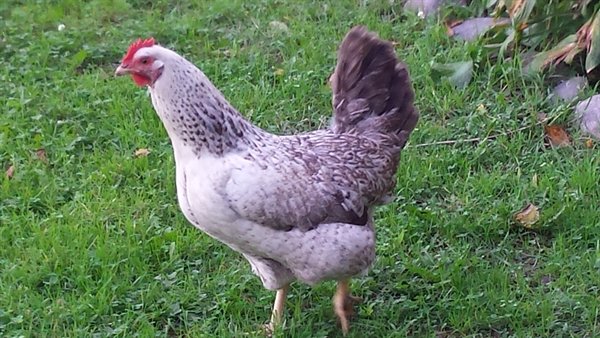 It’s been ages since I’ve posted anything about our homestead. But it seems like not much is happening. The garden was emptied, with carrots being our last produce to be pulled.  We waited until a couple of frosts hit in the hopes they would turn sweeter. This week, Papa planted several rows of garlic. We had planted some last spring but they didn’t do as well as we hoped, even though some “experts” said you could plant in the spring. Apparently fall is the only time we should. There are five rows of garlic – Papa hopes it’s enough to satisfy even my garlic-loving self :-).

The chickens are all thriving, although with the decreased daily hours they are no longer producing. I miss those bright orange yolks – scrambled eggs just aren’t the same.  Most of the chickens went through a molting session this fall. “Broody”* looked like a lovely chicken just a few weeks ago.

*Not her real name; she doesn’t have a name. She’s an unknown breed and she becomes “broody” at least twice a year. 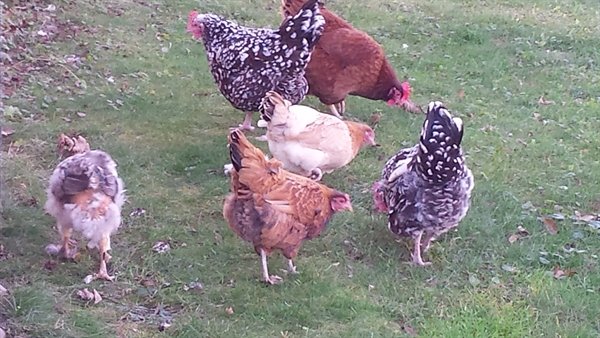 Now? She’s the chicken on the left (sorry for the butt picture – they don’t always like their picture taken). She’s MOLTING and has no tail feathers! Why would you molt in November?!  Our yard almost looks like it has snow – there are hundreds of little white feathers all over.  We get them in the garage too if we don’t close the door.

If “Broody” survives the winter, I’m thinking maybe we should find some fertile eggs next spring and let her do her Mama thing. 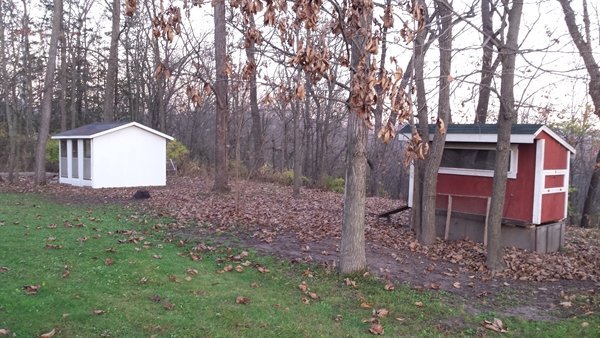 Papa managed to finish the “new” chicken coop in time for colder weather. He took apart the old chicken run this summer as the bottom boards were rotting. He rebuilt is as a new coop, using some of the screened windows so we can open and let in air in the summer. The new coop has more perches but only two nesting buckets. With our 8 laying hens, that seems to be enough. He found some inexpensive sheeting for the outside and some mismatched shingles from Habitat ReStore, so the expense was kept low.  Most of the time you can’t see the multi-colored roof anyway.  Eventually we hope to figure out how to move the old red “barn” coop over so they are connected, but it’s HEAVY and we haven’t quite calculated how to do it. We’re hoping the new location will be better for the chickens in the winter as the sunlight should be able to reach the coop better. 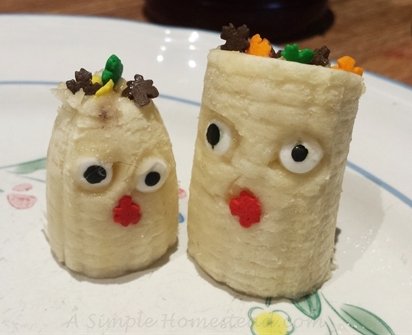 Unlike last year with our first exposure to multiple children, resulting in colds and illnesses at least once a month, we’ve managed to stay rather healthy this year. Until this weekend… Little Chick ended up with a nasty cold that caused a mild fever and laryngitis. If you’ve met our daughter, she is a Talker! So, it’s rather funny (and odd) to have her not talking / whispering.

We still had some fun the past few days. I made her funny banana faces to encourage her to eat, using candy eyes and leaf sprinkles for the hair. 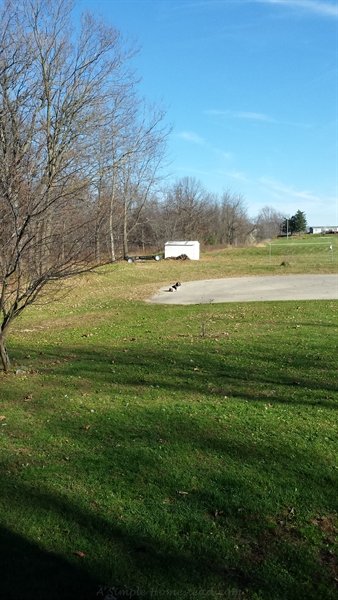 As I mentioned in my last post, Finley spends as much time as he can outdoors – provided the weather is good, or at least the sun is warm.  Any sunny spot is good for him – especially if he can watch for “trespassers” … anyone coming down our road.

Other than that, it just feels like we’re in a holding pattern waiting for winter to start.  I’m ok that we haven’t seen much snow yet – I know it’s coming.

How are things in your neck of the woods?