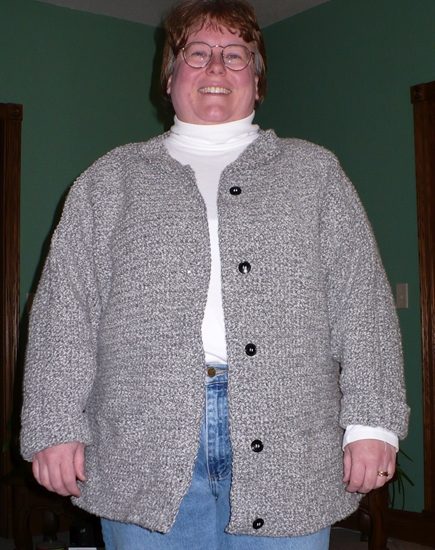 It’s DONE! I am so happy about this … it’s my first completed sweater/cardigan!

The pattern is a free one that came from Lion Brand’s website. It’s called One-Stitch AdultCardigan. I don’t remember exactly when I started this cardigan but it was some time in the beginning half of 2008.

The pattern called for Wool-Ease, but I couldn’t find that yarn right away/on-sale and I had a very tiny yarn “stash” at the time. What I did find was a very luscious looking Bernat Denimstyle yarn. I just had to buy it! I bought 10 skeins just in case (since this yarn has a dye lot) and ended up using just a little over 9 skeins.

The pattern is designed for Small-Large and 1X-3X. I’m in-between two of those sizes (won’t tell which), but I like my sweaters large and roomy, so I went with the larger of the two. Even though both yarns are considered a medium/worsted weight yarn, I think the Denimstyle is a bit bulkier. Between the larger size and the slightly bulkier yarn, this worked out to be plenty big enough – and will be nice and toasty warm. 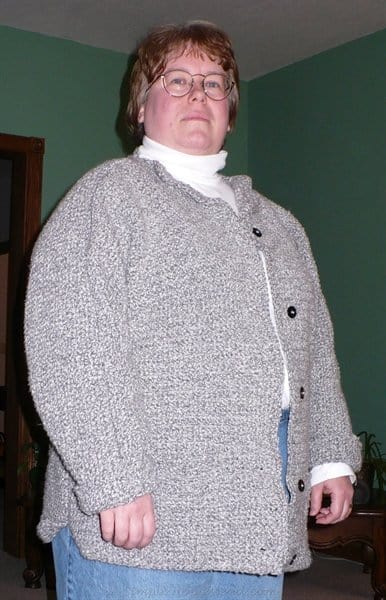 (yes, I know I don’t look excited to have finished this. More on that later…)

I learned several things making this cardigan. One was that I’ve improved a LOT in my crocheting in the last year. I remember this being difficult for me when I began. I did a lot of “frogging” (rip-it, rip-it) and starting over. When I picked it up again last week, not only did I fly through the rest of the pattern, but it all made much more sense.

The second thing I learned was that I still have a lot to learn. The softness of this yarn hides a lot of imperfections. I also broke some of the “rules”, but at the time I didn’t know there were rules … things like “fluffy” women should not use “fluffy” yarn – it only makes us look bigger, etc. Despite all that, I’m ready to try my next sweater soon!

[Later note: Ok, I’ve learned a third lesson. When you change the hooks/yarn/etc. on a pattern – WRITE THEM DOWN! I just found some notes saying that to make the gauge work on this pattern I ended up using an H-hook, instead of the called-for J. However, since I didn’t put that on the printed copy of the pattern, when I picked this project up again in 2009, I used the J-hook. See how forgiving this pattern is?!? I can’t tell the difference! Apparently I must crochet tighter now than I did back then because I thought my rows actually looked a little shorter than before, even with the bigger hook size!]

It was difficult to take pictures that showed details of the construction due to the effect the yarn made. I ended up folding back the top front edges – mine didn’t seem to come out the same as in the original pattern. I rather like the way mine looks though. The ends of the cuffs are folded back (as per original) and I went with the 3″ slit on the sides. It’s also very difficult to see the pockets in the pictures, but there are two of them. 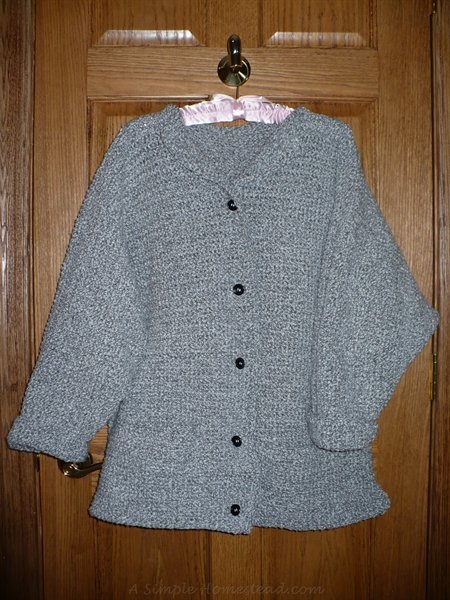 I believe the buttons were ones that I found on clearance at Wal-mart, but I thought they fit very
well. Here’s the back of the cardigan: 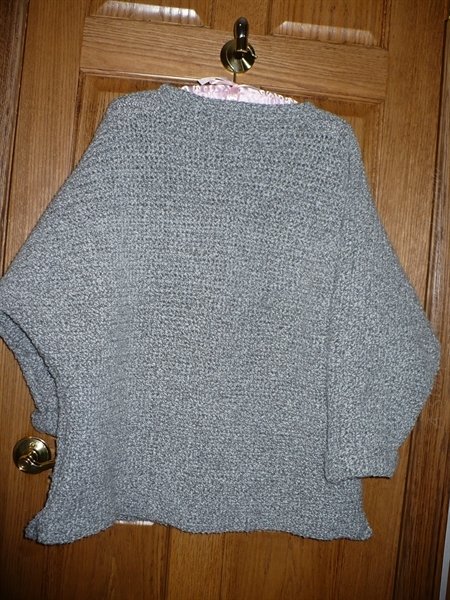 And here’s a close-up of how the Denimstyle yarn works up with a single crochet stitch. 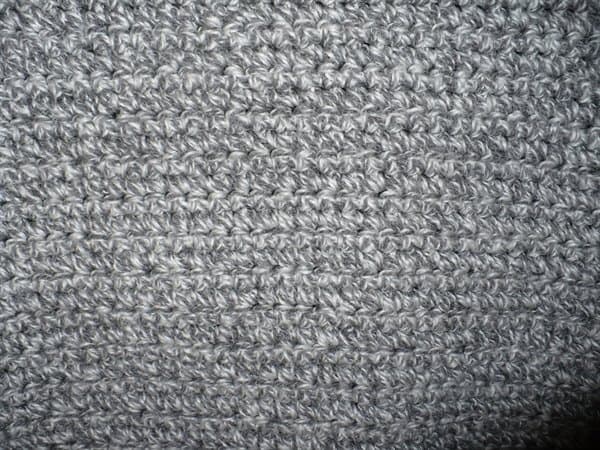 When Papa was taking these pictures, he kept trying to tell me not to smile – or to pretend I was
mad at him. How many years have we been married?! He should know by now that’s a guarantee
to get me to smile! 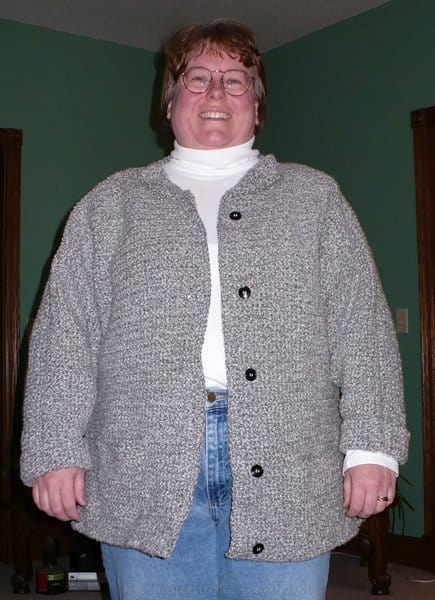 Or maybe that was the point…

No comments yet
crochet finished sweater