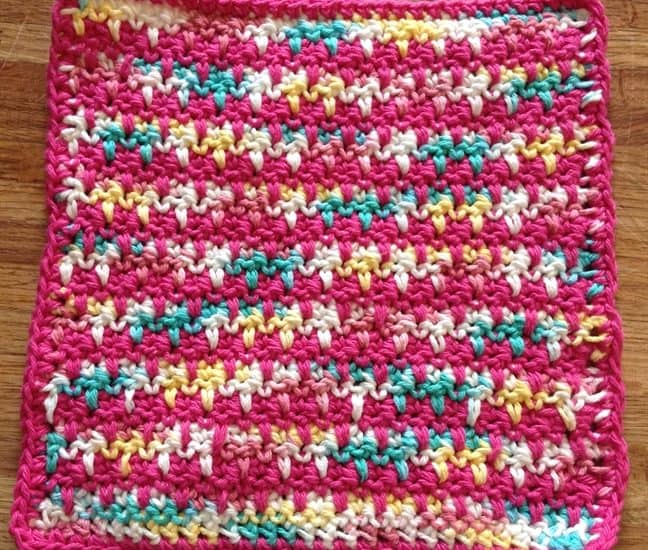 I’m supposed to be going through my craft supplies, sorting through what I have and weeding out that which I don’t think I’ll ever use. My progress this week? Zip, zilch, nada. Instead, I started organizing the yarn closet – the one stash that isn’t moving downstairs!

Despite the fact that I’m organizing the wrong craft, this did need to be done. Partial skeins are being reunited with their full-skein brothers, sock yarns are now grouped together so I can find them all

I’ve even done a little rearranging by fiber types – mainly the cotton yarns. Despite the fact that I gave away several cones of cotton purchased years ago, I still have two left … uh, make that three as I bought that white cone for the basket. I had cotton hiding in multiple bags and now it’s all in one (I think). Suddenly seeing all that lovely yarn together gave me the itch to make some washcloths / dishcloths. They’re quick projects – and so many different patterns to try!

I was going to make another star washcloth because they were such a big hit in our house. Little Chick *still* talks about how I made her a pink one but the red one was for Bonnie! I was pretty sure I remembered the pattern so I didn’t go looking for it. Turns out my memory is faulty (no big news there). Instead of doing the 15 increases for the star points I only did 7. I knew something was up when I ended up adding more sections. It turned out a bit bigger overall too but not by much.

Eh, so I have a nine-pointed star instead of 6. I named it a “Starflower” cloth instead of starfish. When you fold up the cloth so all the points are together it looks almost like a flower; I bet it would be quite to make another smaller cloth in green to wrap around the bottom and gift it as a flower set!

I’ve done a lot of knit projects in the past year so for the next washcloth I switched to crochet. Oddly enough, this one is named just “Crochet Washcloth”. Try Google-ing for that pattern! Simple and quick pattern that turned out rather nice.

When I was playing with crochet stitches for Little Chick’s bag I became enamored of the spike stitch. Wouldn’t that make a great washcloth?, I said to myself. I used up the last of the pink starfish cotton along with the Spring Meadows variegated and this is how it turned out.

No surprise that this one was also quickly claimed by my daughter. I liked it so much I decided to make another, but this time using two solid colors.

The picture looks almost grey, but really it’s a light country blue and navy together. Quite striking in real life.

Even the back of the cloth turns out nice – I like it when cloths or squares are pretty much reversible or at least that both sides look good together.

I thought I was doing rather well this month using up older stash, not stepping into yarnology or any of the big-box stores. But then I received this in the mail!

I had sent a fellow crafter some wool roving a couple weeks ago. She was looking for some and what I had was in a color I didn’t really care for. I expected a skein of yarn in return – maybe two. Not a whole box! However, only a couple of them are calling to me so perhaps I’ll donate the rest (Mom?).