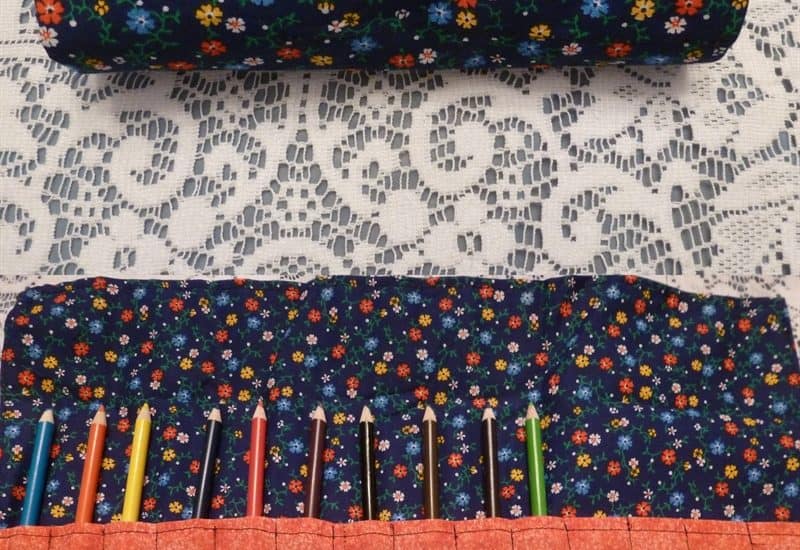 Weird title for this post, but I couldn’t come up with a better one for the vast array of projects I’ve finished in the last week of the year and the first days of the new one.

To start, I learned a new craft … on December 22.  It was for Christmas presents of course.  I mean, who would take the time to learn it before crunch-time?!  I wasn’t sure if the hats I made for my great-nieces would be enough so I decided to try making earrings.  Turns out, they were more interested in the hats.  And … I made them so quickly, I forgot to take a picture!

I also wanted to make my mother some earrings for Christmas as Dad keeps saying they need to be downsizing.  Earrings are small :-D.  (She also received a skein of Aslan Trends Lecco I had in my stash).  These are the earrings I made for her. 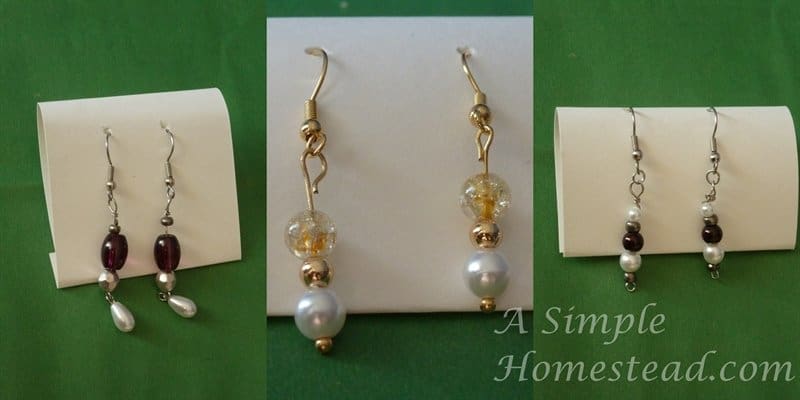 The purple earrings turned out just fine but I had issues with the gold ones.  See how the post of the left one is longer than the right?  Mom didn’t notice until I pointed it out.  I may ask for them back so I can redo them because it bugs me.

I also made a pair of earrings for a friend (I hope she still has pierce ears) and a couple of pairs of stitch markers for my other two knitting friends.  Except … again, I was so interested in getting them wrapped up I forgot to take pictures of the one stitch marker.  *sigh* 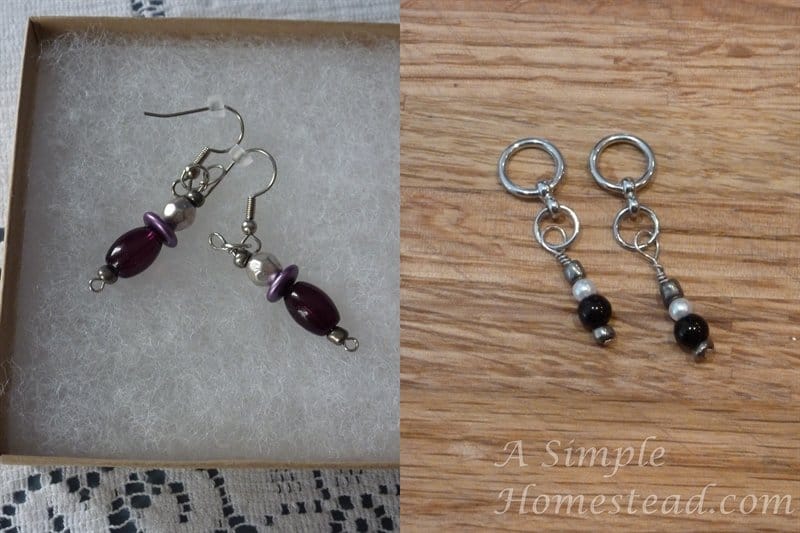 Let’s just say that the other items I made are very similar – but not exact, to the ones pictured here.  Because I can’t make the same design twice!

Those three friends are all getting doilies too … along with a bottle of homemade vanilla and a few caramels. 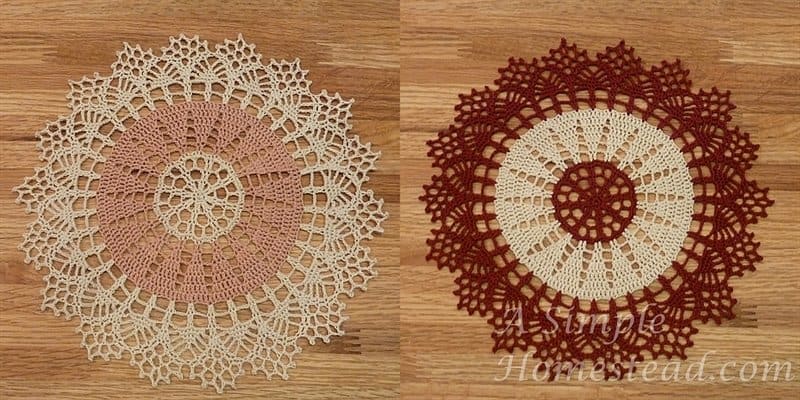 I’ve made this pattern many times before. The third friend is getting a moss-green and ivory colored one because she now has a room in that color (our living room inspired them!). The pattern is also called “The Gift Doily” and that’s what I named the others before. 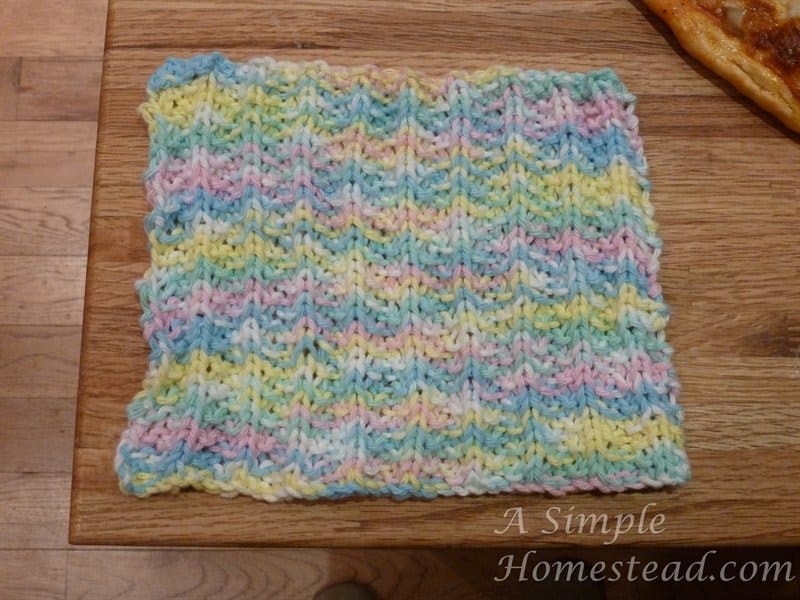 This seems like “small potatoes” compared to my other projects, but I finished a dishcloth last month to – as if I didn’t have enough already on my plate.

The final project I’m going to share is one I just finished on Monday. I had to start the new year off by getting my confidence back in sewing. 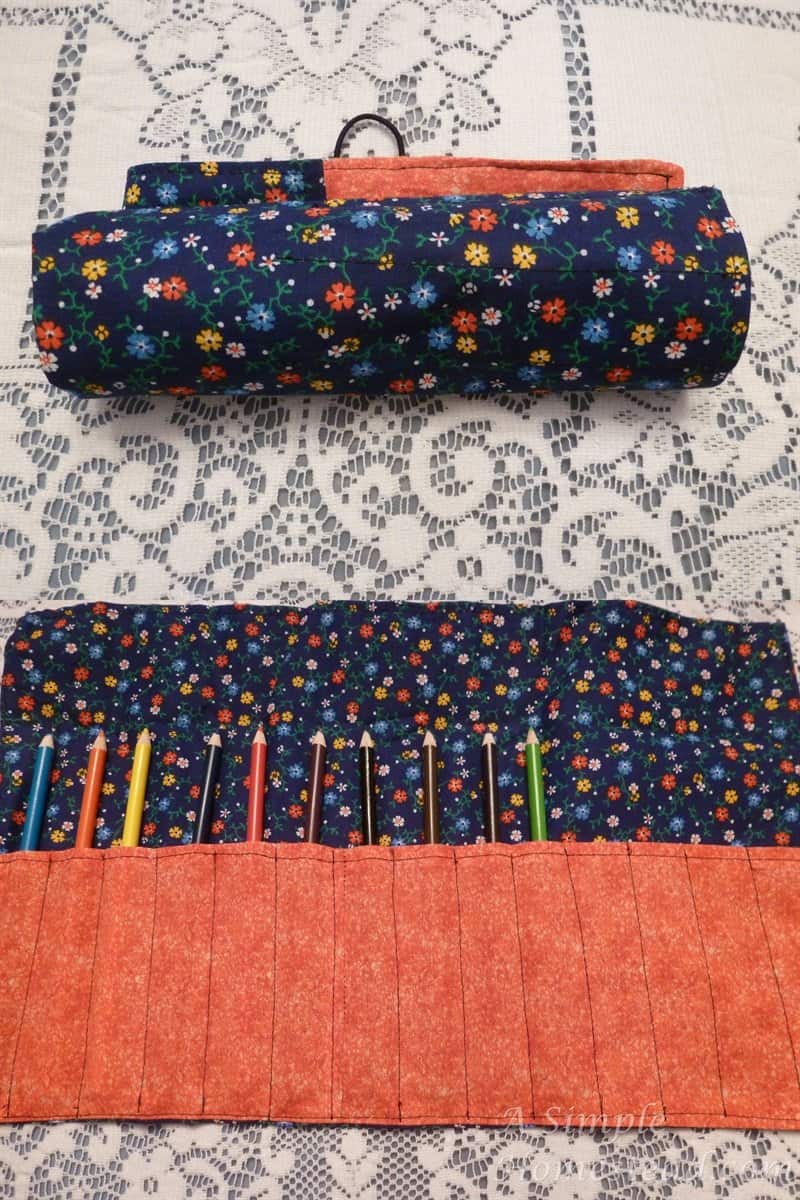 Little Chick had a box of colored pencils that was ripped and falling apart. I decided she needed something better. I looked through my stash of patterns and links and found an idea of a pencil roll. It wasn’t really measurements other than to add a couple of inches to the height of the pencils and to allow for 1 to 1 1/2″ for each pencil.

I think it turned out rather well.  Some of the stitches are exactly straight – especially as I got closer to the end.  But at that point I was getting tired of “What are you cutting?” questions when it was obvious Little Chick had stopped cutting paper.  And the infamous “Uh oh. It’s empty” interruption.  That would her announcing that she had dumped an entire bottle of glitter dumped on a card.  A bottle I swear I had put out of her reach.  So making this turned out to be a lot of – sew a few lines, get up to see what she was doing, clean up the mess, get her interested in something else, go back to sewing for a few minutes.

I’m either going to have to rearrange my craft room so it’s more toddler-friendly or only craft when she’s napping … except that doesn’t happen every day anymore.

5 Replies to “FO Friday – doilies and jewelry and sewing, oh my!”