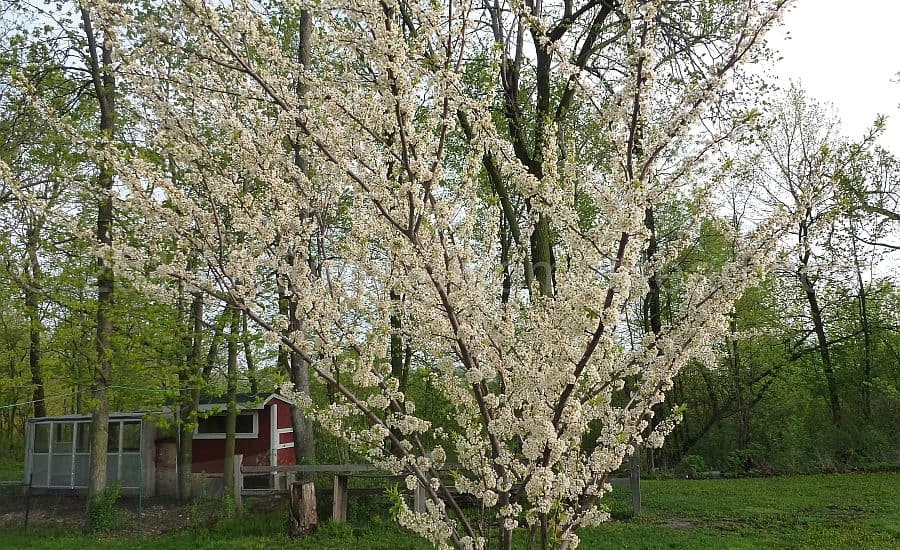 Hurray for spring! I don’t know about you, but I became horribly sick of winter.  It lasted way too long.

Our tulips survived the 3″+ of snow we received just a couple of weeks ago and are in full bloom.  Can you see the “M” pattern we created?  We did that with the tulips and in between we have daffodils and narcissus that already bloomed.  After the tulips are done, those inner areas will be filled in with hostas which you may be able to spot. 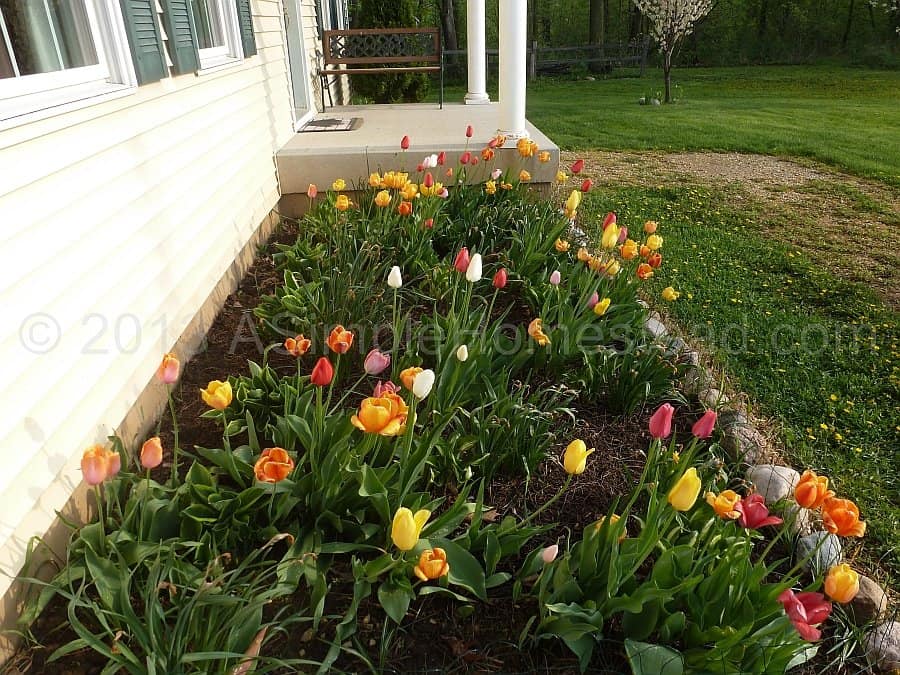 We have an abundance of blossoms on our two plum trees this year.  Last year with that early, early spring, they all froze off and we didn’t see any fruit.  I just wish they blossomed all year long … or that someone would figure out how to bottle that sweet fragrance.  It helps to clear the winter muck out of my sinuses when I take deep breaths just to catch the scent. 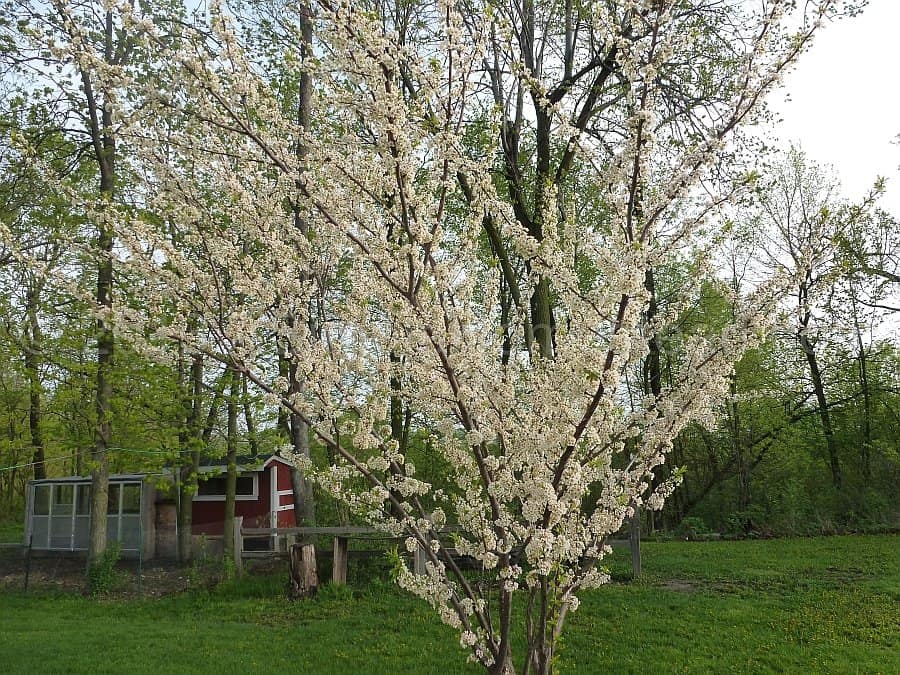 Our strawberries are almost ready to blossom.  I’m not sure if we’ll get to eat any.  Once Little Chick realizes that strawberries grown in that area, she may pick and eat them before Papa and Mama Chicks even get a chance!

My Egyptian Walking Onions came back this year.  I was hoping they would.  I won them from a blog last year.  They’re called Walking Onions because if you let them go, the bulb that produces at the top will become heavy, the stalk will bend, and it will “plant” itself again.  They look like they are about ready to do some harvesting but I want to make sure I don’t take too much so the plants will continue to regenerate. 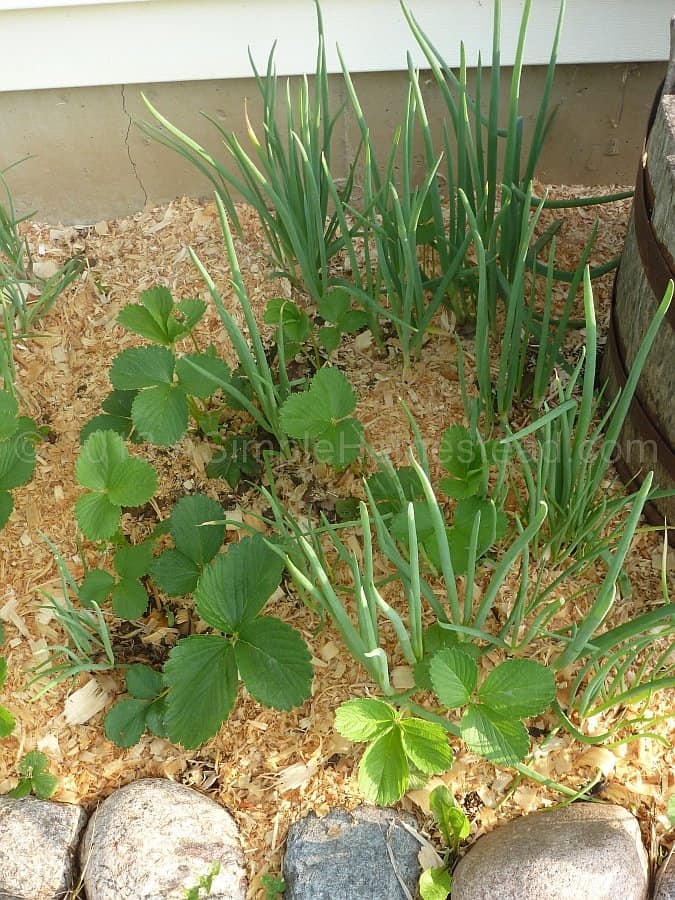 Last week we were even able to get our garden planted.  Lots of warm sunshine and a good dose of rain means they sprouted quickly.  Although … if you look closely it appears someone has been munchin’ on our beans already as there are carcasses in the bed.

We have just two 4×8′ raised beds and a couple of whiskey barrels.  Over the last two years we’ve learned to grow what we truly like to eat – with an occasional experiment thrown in.  The beets were a disaster (critters ate them all) and I wouldn’t say last year’s Brussels sprouts were an amazing success since we planted them way too early.  This year we have LOTS of peas, some beans, carrots, three tomato plants, a green pepper and lettuce.  My husband is thinking maybe we could plant Brussels sprouts somewhere else. 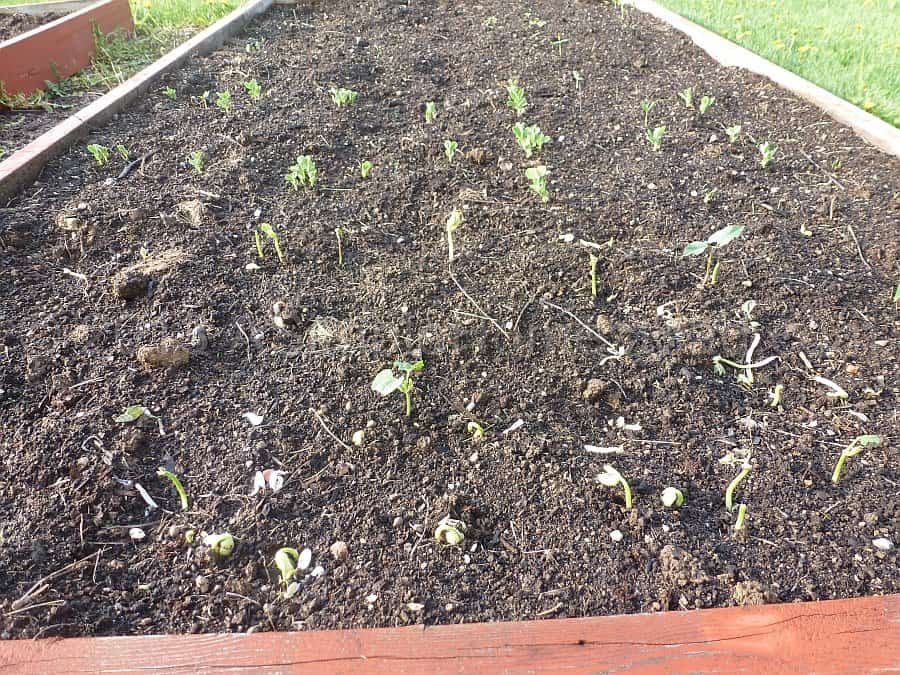 In addition to our strawberries and plums, we also have rhubarb and a single apple tree for our fruit supply.  We have a second apple tree which we thought was safely outside the black walnut drip line, but it must not be as it has never blossomed nor produced in 5+ years.  Papa thinks we should cut it down; I think we should try moving it first.  We also have some grape plants along the fence-line by the chickens.  They’ve never produced either, but the plants are now big enough where I think they should – if not this year, then next.

No comments yet
gardening