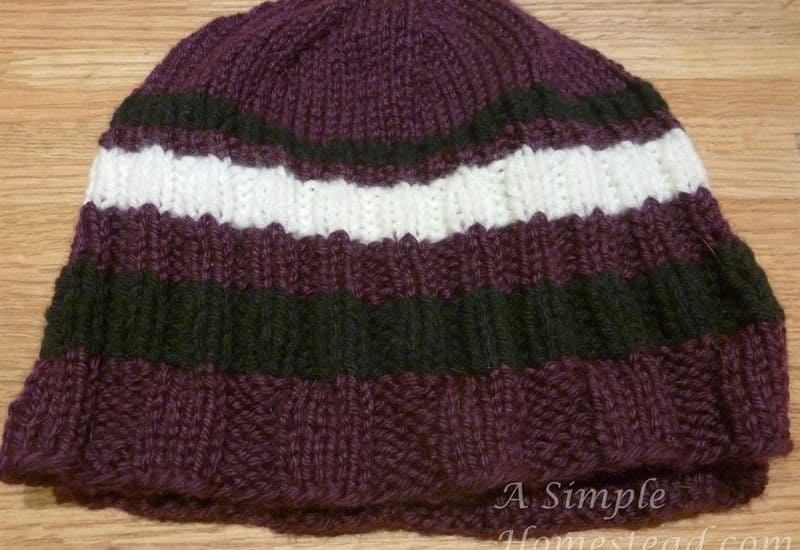 Do I sound like a broken record yet?  Yes, I finished another Strib Hat.  I really like this pattern.  After making it for the third time I basically have it memorized, although I might have made the stripes different widths than the original. 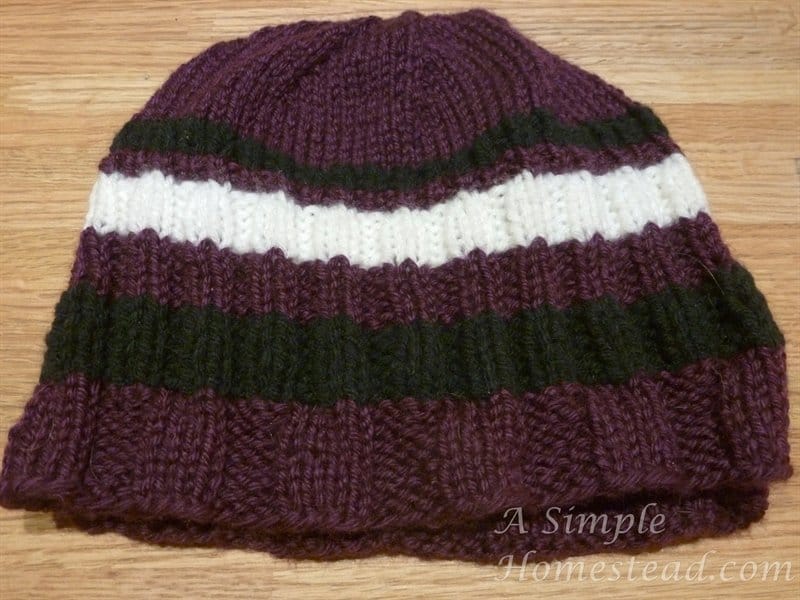 After seeing the other hats at Christmas, my sister-in-law requested one that would help keep her warm while walking her dogs.  All three of them … two little girls (Bichon Frise and Shih Tzu? I’m not sure) and one sweet but giant female Great Dane!  She requested it in Aubergine … to match her coat.  I just happened to have this “Grape” color in my stash – to work on that sweater I just frogged.  I don’t think using up a little bit for her hat will leave me short on yarn for my sweater.

This time I cast-on the number of stitches for the toddler size but used the larger sized needles called for when making the adult hat. I think it’s a perfect fit! I plan to get it sent off to her in the next day or so.

Papa says I switch back and forth too much and claims he can’t keep track of what project I’m doing … so what else am I working on? 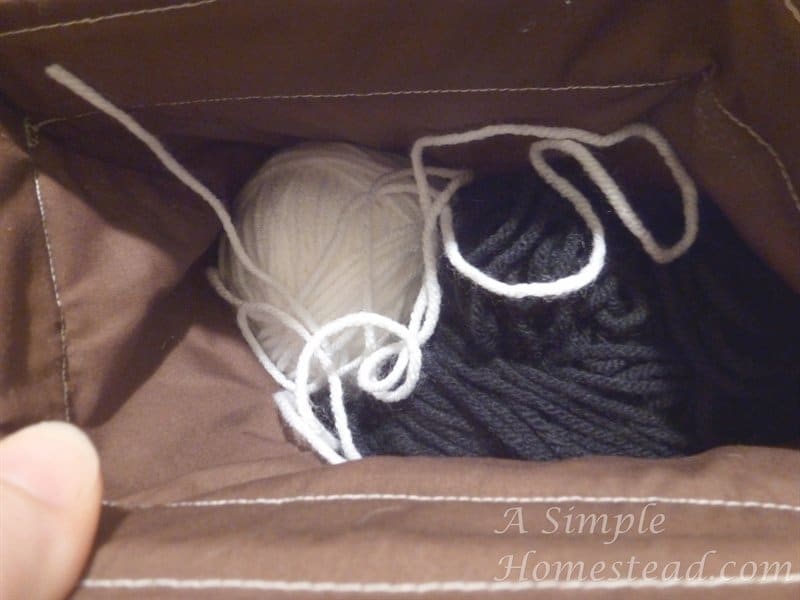 Oh, look … it’s the makings of another Strib Hat, ready to go in my project bag. I just need to find some red color.

I think Papa “complains” because he keeps asking if I’m working on my weather project, and I usually reply “No.” Making just 48 stitches every day is quick and completely do-able.  I work on it, and then it’s put away until the next day.  I’m not sure why I was worried about keeping up. 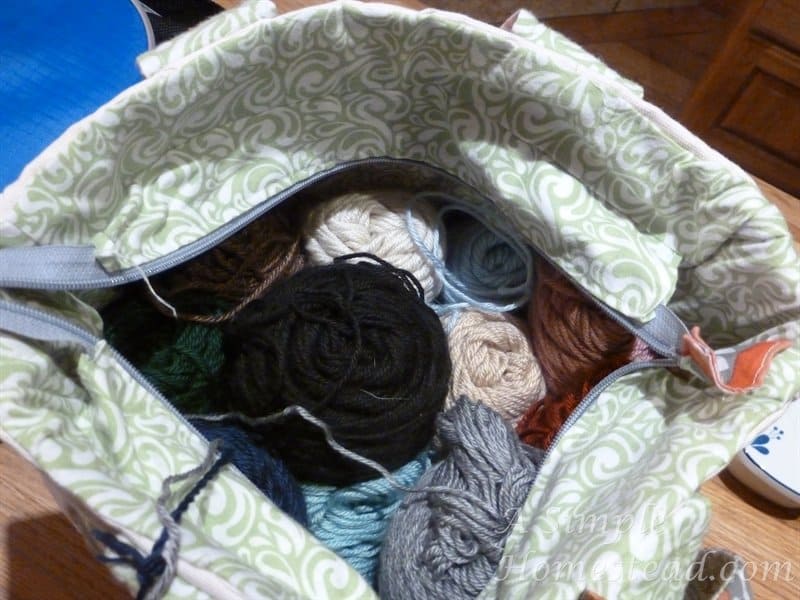 All the yarn colorways I picked out are being stored in a project bag. It’s almost a shame, because I love that bag… but I guess it means it’s allowed to stay out in the open all year long and I have the privilege of using it every single day.

This is a picture I took of it on Wednesday. The first 15 days of the month.

Someone on my Ravelry Weather Knitting or Crochet group commented they didn’t envy me all those ends to weave in.  My plan is I’m going to make sure each monthly block is FINISHED … including weaving in ends before I move onto the next month.  That will save me the hassle of doing it all and the end of 2014 – or not completing my afghan until late into the next year.

I like the color variations that are coming out. I was concerned we might be in for a burst of blue color (my 30-39°F range), but yesterday only reached 28° and it’s expected to be in the teens today and tomorrow. I have to say I think this is the only time I’ve ever wanted the temperatures to fluctuate in January … just so my square doesn’t get boring! 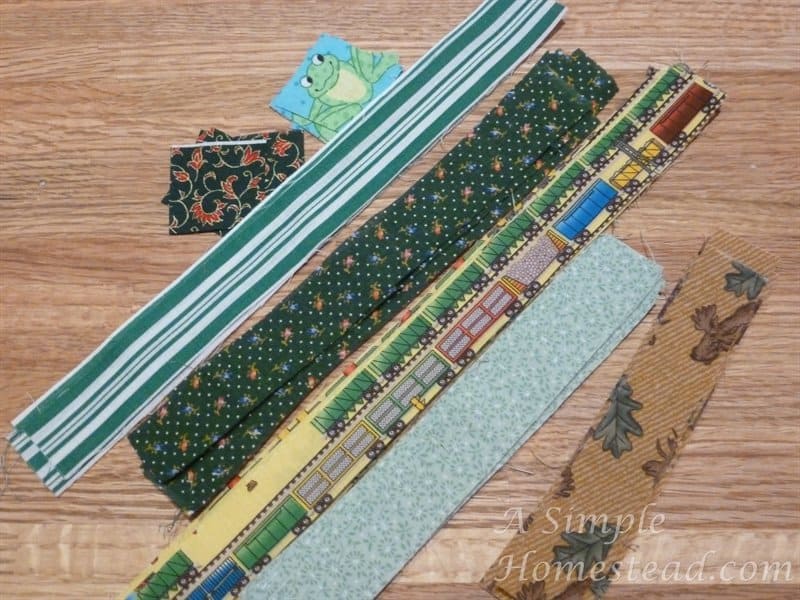 I was tough getting that part done as someone kept wanting to get into stuff in the craft room she shouldn’t.  *sigh* I miss nap times.  This week we’re supposed to sew the strips together into the log cabin front.  We’ll see how much I get done.  I don’t have enough strips cut to make much more than one – or maybe two blocks, but even that would be a victory for me as I’ve never done anything like this before!