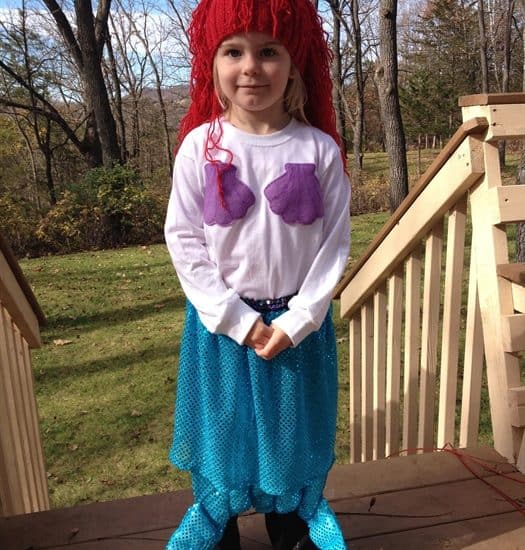 The big day is here … time for the Halloween costume reveal!

As I mentioned, our daughter decided she wanted to be Ariel from The Little Mermaid this year.  I’m not surprised that she wanted to be a princess, but happy to report that she won’t be one of the thousands of Queen Elsa’s (Frozen) running around tonight.

First thing to tackle was the red hair. 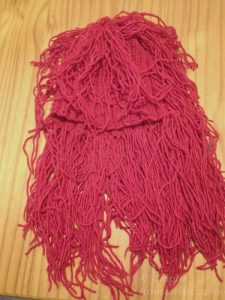 I made a hat using a 2×2 ribbing pattern so it would be extra stretchy.  I then woven in strands of varying lengths of yarn to create “hair”.  Not the refined and flowing hair that Ariel has, but it works for a one-day event.

I had hoped to sew the hair to the hat so it would stay better and wouldn’t pull out.  I found that extremely difficult to do without sewing down parts I didn’t want so I gave up.  We’ll see how long this lasts before we find all kinds of yarn pieces all over the house! 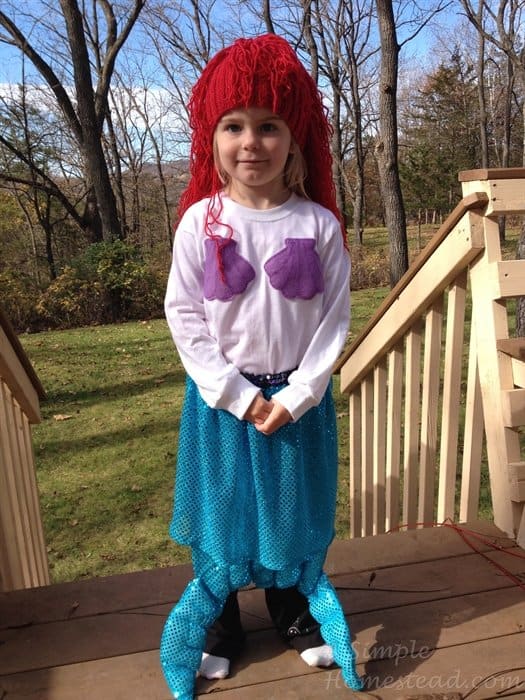 As I mentioned last week, I was inspired on my drive to the store to try and find some mermaid fabric.  Actually, I think the picture of the fabric I showed last week was the wrong one.  Unfortunately you don’t get a nice sheet when you purchase from Hancock as to what fabric it is (unless it’s on the receipt and I’ve never noticed!)  Next time I think I’m going to snap a cell photo while I’m still in the store!

Keep in mind, all except the very first seams in the sequined skirt were hand-sewn!  (I’ll repeat what I said last week…)  I didn’t realize that the odd texture of the fabric was actually a sticky substance that kept gumming up the sewing machine needle, causing the thread to stick and then break.  Probably a lack of experience about fabrics on my part, but if I’d known that I would have gone looking for a different fabric.

The t-shirt was store-bought but only cost $5.  I wanted a long-sleeved shirt because Halloween around here always seems to be cold, rainy – or both.  Today we’re expected to only reach 41ºF.  Only die-hard football fans wear swim suit tops in that kind of weather.

The seashells were the most mentally challenging.  I couldn’t wrap my head around how I was going to sew scallops!   On Saturday I was done with the tail and knew that I finally had to jump in and work on the top.  Fortunately when I went to the craft room to hunt for purple fabric I spotted our wonderful supply of felt.  What a great idea – then I don’t have to worry so much about the scallop edges as they aren’t going to fray.  I found a scallop seashell image on the internet that was simple, printed it and cut out the shape.  It was then a simple plan to trace onto the felt, cut it out and then do a running stitch around the edge to tack it to the shirt.  The lines on the shells are marker and may wash out the first time we wash it, but I don’t care.

Now for the pièce de résistance – the tail.  A couple days after my big fabric-store purchase (which actually was < $20), I realized that the sequined fabric was much thinner than I remembered.  Our daughter is not yet 4 years old so we felt a bit of modesty was in order – even though it will be cold tonight and she’ll be wearing pants.  The main part of the tail is a simple skirt with some teal knit fabric underneath for a lining.  It’s hard to see but there is also a black iridescent stretchy sequin belt around her waist.

The tail is basically an apron; a double-layer thickness of the material that is tacked inside the skirt and hangs down below.  I cut fin shapes and sewed them to the sides of the apron.  To give the tail a bit more of a 3-dimensional look and to add a bit of weight, the bottom of the tail and the fins were lightly stuffed with polyester filling.  Once they were filled, I sewed some “ribs” to make them look even more like a tail.  Oh, and did you notice that Papa won the “argument”; I did end up having the tail in front so she could kick it.  I think it will show up better that way.

Our daughter has some sparkly turquoise shoes that she’ll wear with the costume tonight.  We don’t have a coat that goes well with this costume, but that’s not surprising.  What mermaid needs a coat?!

Was this worth the time and effort it took?  Absolutely!  I know it looks hand-made but that also makes it unique.  I think it all cost $20-25 for the whole costume.  Last year we found her a Princess Sofia dress for $15.  That didn’t have hair but did come with a tiara.  She’s worn that Sofia dress so often that it is literally falling apart and is beyond repairing … again (I think I’ve fixed it at least twice).  The fabric and sewing in this costume should outlast the store-bought one if she should so choose to wear it out.

Pattern: n/a
Designer: me
Fabric: American Knit Sequins Teal Fabric from Hancock Fabric (item 2104230). Belt is a stretch sequin but I don’t see it on their website.

These pictures were taken last Saturday as we were both excited that the costume was done (a full 6 days early – unheard of for me!).  I’m planning to get some more pictures tonight before we head out for trick-or-treating.