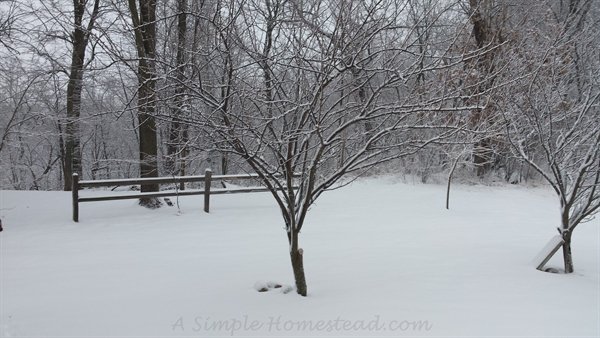 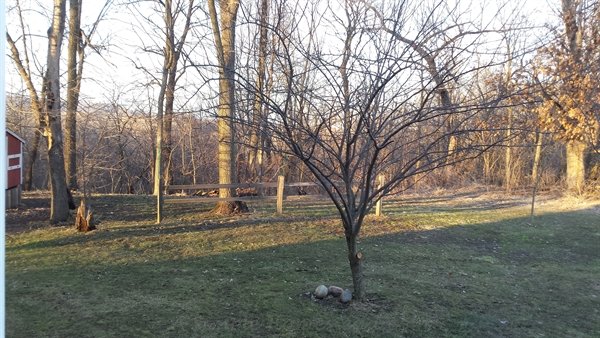 Two days ago I snapped a picture of our front yard. It was hard to believe how spring-like it looked on the 22nd of February. We had so many days of 50-60°F (10-15°C) weather the past couple of weeks that all the snow had melted – except in a few places where it had been piled high.

Our world is gloriously-frosted again. All the local news stations were calling for an all-out blizzard, but most local areas received only 1-3″ (~2-7 cm) overnight. Granted, it’s not over yet. Winds are supposed to pick up and more snow is on the way. Meanwhile, everything is melting … to make it nice and slippery for tomorrow!

Little Chick was disappointed. This has been a “fun week” at school, with different dress-up days: Monday was pajamas, Tuesday was rainbow (her grade wore red), then Wacky Wednesday (clown wig and mis-matched clothes) and Thursday was 80’s day.

She was a ballet girl instead of a Valley girl, but she was at least sporting a scrunchie and her new handmade legwarmers :-).

Today was supposed to be school spirit day – wearing their school colors. But that’s not why she was disappointed. Original plans were that the whole school was going on a field trip to do some sledding / tubing. Remember that first picture? Yeah, no snow meant that the location had to cancel. Go figure that it would actually snow today, but they would have still needed time to prep the hills. Alternative plans were made and the younger grades were supposed to watch Trolls in the morning and go to the Children’s Museum in the afternoon. With the overnight snow and the forecast, they decided to close school today. This is the 4th “snow day” this year! (not counting the early release days).  I hope they don’t end up making up days; they’re already scheduled to have classes until June 9th! 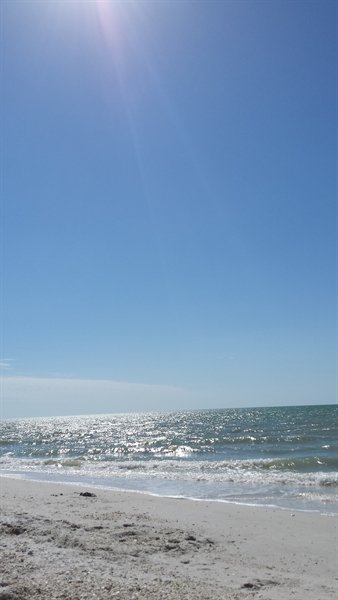 Just a few short weeks ago, this was our view… Barefoot Beach State Preserve in Bonita Beach, Florida. We were there on our annual trip to visit my parents. The temps were a lovely 70°F (21°C) the whole time. We were unlucky that they were doing emergency repairs to the pool that week, so no swimming for us, only splashing and wading in the Gulf.

It was a nice, relaxing time. I’ve learned the last few years that I prefer to keep things low-key and not spend a great deal of time running around. I’ve also learned that most of the things we do that Little Chick enjoys are free (except maybe gas for the car).

Case in point … blowing bubbles on the lanai. 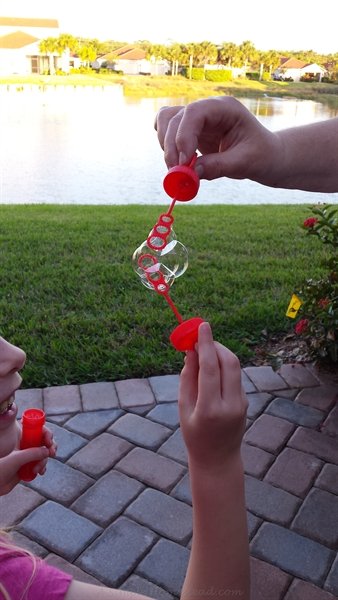 This year, Nana had some new bubble containers and the wands made multiple bubbles at the same time! They had fun blowing them and catching them again before they popped :-).

Usually I make at least one trip to the store for necessities or accompany Nana to Publix for groceries. This time, the only shopping was a mid-week trip with Papa to get some bagels. (Nana and Da don’t each much bread, however it’s a requirement in our household LOL) 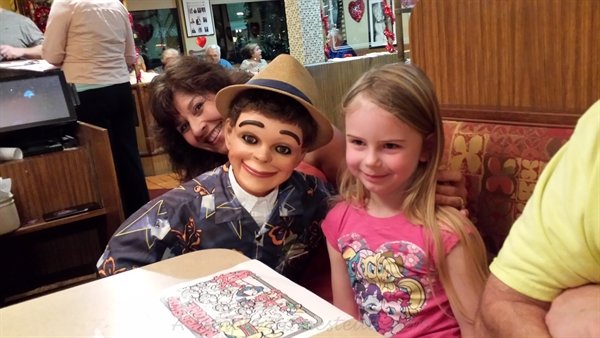 We had one family dinner out in a restaurant. They took us to Mel’s Diner so we could go see George again. George is the “friend” of Brenda Stelzer, a local ventriloquist. She does a wonderful job and George loves talking to people. We saw him for the first time last year. He called Little Chick a “princess” … and she has been in awe of him ever after :-).

But right now we’re back in good ol’ Wisconsin…

The only other news we have about our homestead is that the chickens are now laying up to 4 eggs a day. They were really happy to see the snow disappear so they could get out and do some free-ranging (some like hanging out under our neighbor’s bird feeder!) We have to be a little careful though. A fox has been spotted numerous times in the neighborhood. We’ve also been hearing a lot more coyote howls, but that’s at night when they’re safely tucked into the coop.

I’d love to hear how things are in your part of the world!

One Reply to “The Return of Winter”