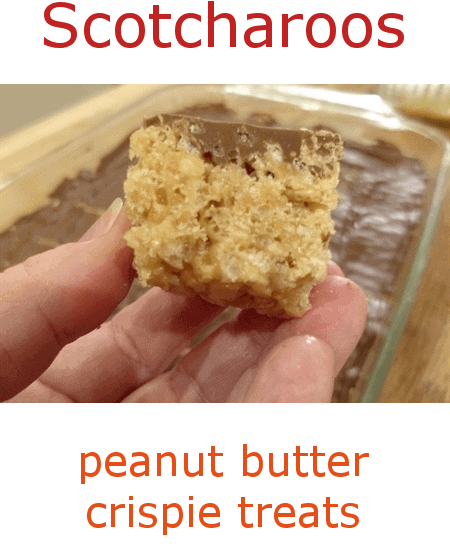 The last time we had to make treats for church, I wanted to make Scotcharoos. I debated whether or not I would write up the recipe. But then I needed to look up the recipe, because it had been long enough I wasn’t sure I remembered correctly.

I should have remembered as this is a very simple recipe. Just remember 6 to 1: 6 cups of rice cereal and 1 cup of everything else!

I’m not a huge fan of corn syrup and there does happen to be a lot of it in this recipe, but I don’t make this very often. The only other time I use corn syrup is making my homemade caramels at Christmastime. As long as you keep things in moderation, all is good.

You can use either creamy or chunky peanut butter for this recipe. I happened to use chunky this time as we had more of that in the house.

The step-by-step instructions below look long but it’s really very easy. Melt the sugar and corn syrup, bring just to a boil, stir in the peanut butter and mix with the cereal.

Then you melt the chocolate and butterscotch chips and spread over the cereal mixture.

As you can see, neither my cereal mixture nor my chocolate layer is very even, but it doesn’t matter as long as it’s “close” – that way everyone gets a generous piece with all the goodies.

The last step is the hardest part… waiting for the chocolate layer to cool and harden so you can cut into squares. Yeah, letting it cool before cutting doesn’t always happen in my house.

Have you ever made these delicious treats before? Do they disappear as quickly in your house as in mine (which is why I don’t make them often!)? 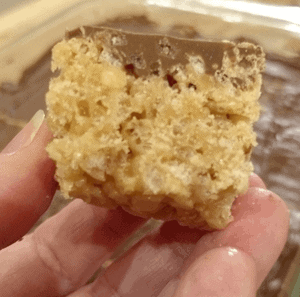 A quick and easy recipe that is a favorite at gatherings – or just a Saturday afternoon at home!
Prep Time5 mins
Cook Time5 mins
Servings: 24

Allow time for the chocolate layer to cool before cutting into squares.
Comment (1)
bars dessert recipe