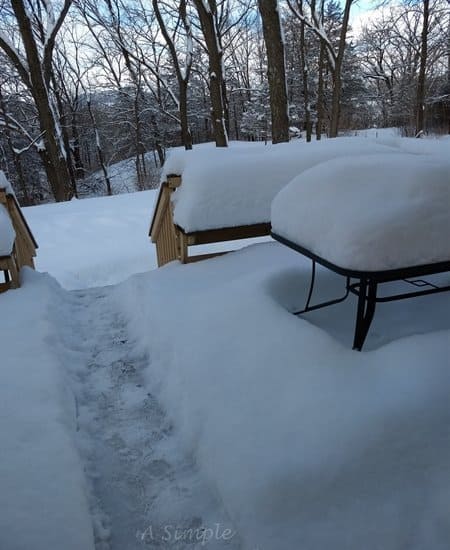 March was a crazy month for our family!! There were five weekends and with all the running around we did, it’s not surprising that I was sick one weekend and Papa the next. We “just” had colds, but they were pretty nasty. I’m just thankful we seem to have avoided the influenza that’s in our area!

March came in like a lion – we were dumped with another foot of snow in the first couple of days. Little Chick and I just shrugged it off, because just two days later we had this view:

Yep, we went to Florida again this year to visit my parents. We had beautiful weather. Just one day it struggled to get to 70°F (21°C) – all the other days it was mid-to-upper 70s!

This year the escape to Florida wasn’t so much about the weather even though we had received more snow in late January to early March than we normally get all winter. Instead, this year was getting away from the stress at work. The trip almost didn’t happen. I struggled to find times/prices that met our needs. At one point I asked my daughter if it would be ok not to go this year. She said it was ok – but later, after I did make reservations, she said she had lied; she didn’t want me to feel bad 🙂

We kept the visit low-key. We went out to eat once, Dad had a cousin and his wife come over for a visit. Otherwise, we swam in the community pool, blew bubbles (it’s mandatory during our trip!), did some crafts and puzzles, lots of snuggling time for Mama and Little Chick. She also did some drawing. What do you think of Pizza Man? He’s a favorite of mine!

I’ve been debating about setting up a place where I can share Little Chick’s artwork. She is SO good! (Not that I’m biased or anything). I’d love to hear if you’re interested in seeing more…

We also shopped!!! LC had money burning a hole in her pocket, so we had to go to Target (like we don’t have those here!), I bought some new sandals at Bealls, there was a grocery store trip, a Joann’s trip (see my new yarn?! even thought we also have that here). There was also a car trip to find a local yarn store that ended up in disappointment; the store doesn’t exist – the address on their emails is a mail delivery place. Phewy. Although it’s probably just as well. After all our shopping, even with a little extra room I had left in the suitcase, we were bustin’ at the seams (literally).

As in past years we drove to Milwaukee, stayed with Grandma N overnight before flying, since that gives us a direct flight AND we get to visit with all the grandparents. We reverse the process coming home. It’s nice, but it does make for a long trip as it takes us 2 partial days to get to Florida and 2 more to get home.

The following weekend we drove down to Milwaukee yet again to meet with a long-lost relative (maybe I’ll tell that story sometime…). So that was 3 weekends in a row of traveling. Can you see why we were worn out?

The fourth weekend was much calmer, although a sniffly Mom did force herself out of the house so we could all attend a local Family Fun Fest. We went later in the afternoon but the crowds were still heavy. They had rows of booths where kids could play games, win prizes, learn about area activities, shoot a BB gun (just one made the target), play on the bounce houses (the lines were REALLY long there) and learn a bit about science. Little Chick even got to dress up as a medieval knight, thanks to the folks at Castlerock Museum. They were going to have pony rides too, but rain made it a safety concern.

Last weekend was Papa’s turn to be sick and I think it hit him hardest of all. He ended up missing out on our church’s 5th Sunday potluck AND I had to find a communion assistant replacement for him.

I finished a couple of crafts last month. One was a pair of scrap yarn mittens, completed just in time for them not to be needed! (Hurray for that!)

I stepped out of my comfort zone by signing up to create a couple of pillowcases for Ryan’s Case for Smiles. HR at work encouraged us to participate by offering to pay for shipping the pillowcases up to our local chapter in Minneapolis if we had them finished by March 27th.

Once I figured out directions, they were SO EASY! and fun to make. I can see never buying pillowcases again – not when you can create whimsical and brightly colored ones like these!

I wanted to keep the orange apple/bumble bee one, but I had to turn in at least 2 … and there was an incident of the black trim bleeding onto the animal fabric after washing (I thought it had been pre-washed). So I had to turn in both yellow/orange ones. However, after extensive searching online, I was able to find some place that has the same fabric so I think I’m going to buy more and make myself one. 🙂

I’m glad it’s April. The snow is gone. The days are longer. The sun is shining more. Sigh. Spring is a wonderful time. Just don’t get me started about what the chickens did to my crocuses!! (Ack!)