We had a wonderful Independence Day celebration yesterday. This is becoming one of my favorite holidays as we have made it a family tradition to participate and attend many of the festivities. Our local Lions club are the organizers and I think they do a great job!

We even brought Finley with us! Since everything is outdoors, it’s not a problem as long as he’s on a leash. He was soaking up the attention from those that wanted to stop and pet him!  (plus, he found a STICK; it’s not like we have sticks on the property!) 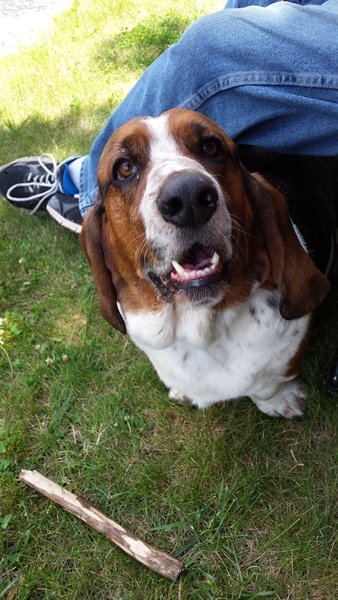 We started our day off by meeting Nana and Da for the chicken dinner. We were a tad disappointed in the dinner; Da said I gave out false advertising. The chicken dinners were 1/4 chicken (white or dark), baked beans and a bag of chips. In previous years they also had a roll and potato salad instead of chips, where it seemed more like a meal.  However, even with the cost of the button you needed ($3) and then the additional for the dinner ($2) we were all filled up. Except Little Chick who insisted on a hot dog instead :-). 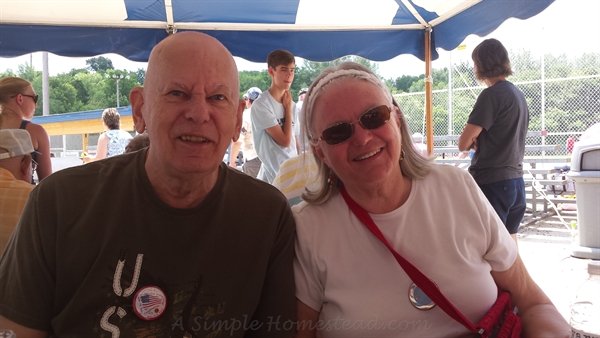 Next it was off to the kids’ games. This the part Little Chick really looks forward too. I think the games this year were run by the Boy Scouts. They had 6 different games to play – most of them tossing games, whether it was tossing a little ball into cups, bean bags into holes or hoola hoops over flower pinwheels. Again, this is a rather inexpensive activity. 25¢ per ticket and one blue ticket per game. For each game you played, you received at least one yellow participatory ticket. If you did well on the game you could earn more than one. I think the boys were more lenient in handing out tickets to the smaller children :-). There were prizes you could “buy” with you tickets. Little plastic toys that I think were mostly donated or picked up second-hand, but Little Chick doesn’t care; she loves each of the toys she got to “buy”. 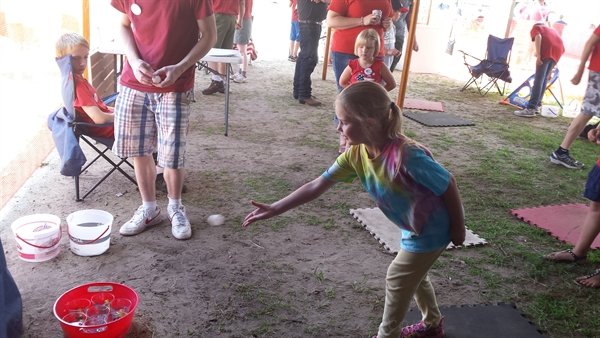 Next it was off to find our usual spot in the shade to watch the parade. Our parade probably lasted an hour which is plenty long for me. It starts off with every fire truck the city owns, followed by floats, local politicians, a couple of church groups, the high school band with flags and pompoms, horses and … CANDY! Of course, that’s the part the kids really like.

There are very few floats, classic cars, or other parade route participants that don’t hand out something! Usually it’s hard candy, but several others toss or hand out freeze pops. If you get to them before they melt, they are mighty tasty on a hot summer day!

There are other events going on all day long, such as softball and volleyball tournaments. Usually after the parade though, we head home for a little down-time. Being less than 10 minutes away makes that easy.

After supper, we headed back to the ballpark. By that time, they have cleared out the kids’ game tent so you can bring your chairs or blankets and watch an animated movie at no charge. They do this both July 4th and the night before. We had seen both movies they were hosting this year, but we still went to the one last night. I sat and watched the movie with Little Chick and a school friend while Papa went off to watch softball. 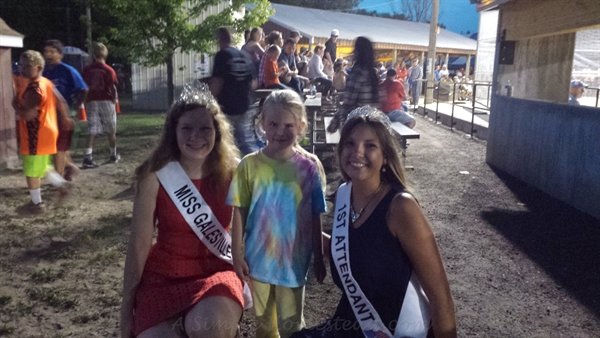 There was a brief wait after the movie and tournaments ended but before it got dark; sometimes you get lucky and can have your picture taken with “The Princesses”.

Then the lights at the ball park are turned off and the fireworks start! Again, given the size of our community, the Lions really put on a good show – 30 or 40 minutes worth.  However, we forgot to bring headphones for Little Chick this year. That, coupled with a long, tiring day and it was past her bedtime meant she wasn’t enjoying the fireworks (i.e. there were tears).  Fortunately we had found a great parking space that was facing the ball park, so she and I went back to the car (with the windows closed) to watch the final 10-15 minutes. Then Papa joined us and we headed home to rest our tired bodies.  I doubt Little Chick stayed awake more than 2 minutes.

I’d love to hear if you celebrated Independence Day (for those in the USA) and what exciting things you did!

No comments yet
family-life holiday parade