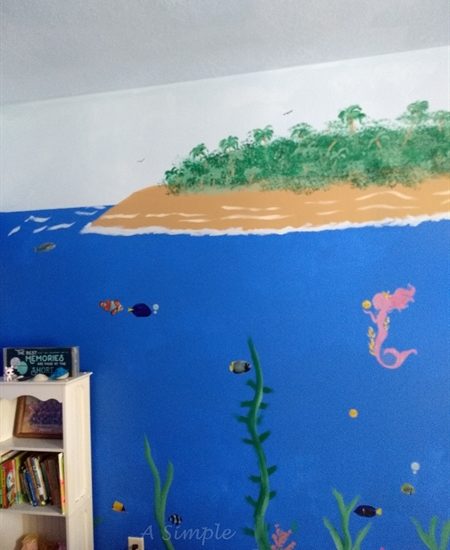 I have been anxiously waiting to show you Little Chick’s new bedroom, but I wanted it to be “complete” before I did so. I’m learning however that this may continue to be a work in progress as we keep adding decorative items to her bedroom! Are you ready to see it? Here is a sample of one wall:

What makes me just as excited it so much this bedroom cost. I’m guessing on a couple of items we purchased, but I know that we were well under $100 by the end. The total was surprising as given how much our original shopping trip cost! The sign on the shelf (it says “The Best Memories are Made at the Shore”) was one of the pieces Little Chick spotted in Joann’s last summer. She also saw this unique mermaid weather vane.

The store had a group of sea / beach-themed items on clearance for 70% off. I ended up picking up these plus a couple items for myself for less than $20.

And then they sat … Because Mama has an issue with pushing past her perfection and actually implementing things she’s unsure about. It’s a ongoing problem. Papa on the other hand – as long as he knows what the end goal is, will forge ahead and just do it.

During Christmas break, he moved Little Chick into the guest bedroom, shifted or removed all of her furniture and got to work! The first night, I came home from work to find most of the bedroom walls painted. If you look closely, the darker blue is a bit blotchy due to the fact that there’s only one coat. But because it’s supposed to look like you’re under the water, it’s perfect!

Each day after, I would arrive home and find another element: first the walls were finished. The next day an island appeared, complete with palm trees and lots of shrubbery. Notice the tiny little coconuts?!

There was some debate as to whether or not a man should appear on the island – either with H.E.L.P. inscribed in the sand, or holding a volleyball … but so far he hasn’t made an appearance.

The next night, this amazing ship appeared. Did you follow that? My husband painted the ship!! Freehand! I’m so proud of him. Even after 20+ years together the man still surprises me. He has hidden talents that I’m still discovering.

He also painted the seaweed coming up from the ocean floor. My contribution was the coral. Apparently I didn’t get a good picture of those; that’s ok – even several weeks later, I’m still geeking out about his paintings!

He didn’t paint everything though. They went to Menards and found some wall clings to add – so we had some glittery mermaids floating in the water along with tropical fish. Note: sometimes it pays to shop local and/or shop around. We found the same decals online but for 2-3 times the price we paid! I like the clings but the one bad part about them is when the sun hits them just right you don’t see the picture, only a glare.

One way we were able to keep the cost so low was that we reused paint we already had on hand. The deeper blue color is the upper color of our dining room (the bottom is white). The lighter blue came from the guest bathroom. Papa did end up picking up a small container of that color to finish because he also covered the whole ceiling. The island paint is our bedroom and the greens comes from our bathroom accent color or the living room. Some of the smaller, added features (like the ship) were created using acrylic paints.

Even after the room was painted, I still didn’t consider it “finished”. We had her original polka dot curtains and it was time to make some new ones.

The fabric is Robert Kaufman, Totally Tropical Dolphins Riviera. I bought it at Fabric.com but it looks like it’s no longer available there. I bought two yards and split it in half; I should have doubled that as the curtains are barely wide enough to cover the window when fully closed. I’m considering adding some material to the outer edges of each panel to make them wider. We’ll see.

We still had a couple more accents to add to the room. I crocheted this “fisherman’s net” using three strands of size 10 crochet thread. In the process, I got to learn the Solomon’s knot stitch. My stitches aren’t all that even but for this application, I didn’t really care. The net is currently hanging over the curtain, but I’m thinking it would look better draped in a corner. We also have a couple of seashells hanging from it after I hot-glued Christmas ornament hooks to the undersides.

I also crocheted up this mermaid tail pillow for her bed. It uses Knit Picks Chroma worsted yarn. It’s a single-ply super-soft yarn that I love. Especially with those wonderfully bright colors. The colorway is called Pegasus. The pattern was something I made up – and someday hope to release.

There are a few features in the room I’m not counting in the cost as either we already had them or they didn’t cost anything – like the miniature crocheted crabs that she confiscated after I released my Crandall the Cranky Crab pattern. Or the jar of seashells and sand that I put together from the many years of collecting both from the beaches of Florida.

I mentioned that we did this all for less than $100 so let me show you the final breakdown.

There are a few more things we could do – like improving the curtains, and making a matching bedspread (which will probably cost as much as the whole room remodel – or more!). For now I’d say her room is at least 95% complete.

I should mention that our daughter LOVES her room. As do her friends and one of her aunts. She’s had a few offers for a roommate :-).

Have you ever done a fun bedroom makeover like this? Is there a theme that you would choose if you could create the room of your dreams?

No comments yet
decorating misc-crafts