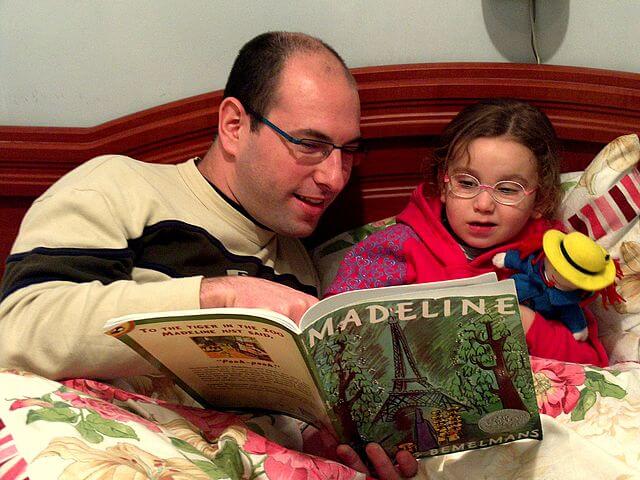 Last week I read an article called “Making Bedtime a Treasured & Meaningful Time with your Children” that stuck with me – especially this section:

I used to think that my children’s willingness to talk at bedtime was a delay tactic! While that may be partly true, bedtime also is the perfect time to talk – to get a glimpse into what is going on in my child’s heart. All of the day’s distractions disappear. There’s no more “to-do’s.” Bedtime is a time to relax, wind down, and most often, open up.

I have to admit, now that Little Chick is 8 years old we tend to spend most of our time nagging to get ready for bed before we finally read a book or chapter and turn out the lights. Prior to last week, I had been semi-aware of the importance of bedtime discussions, but often rushed through our lights-out routine so I could have a little “me time” before I went to bed. Last week, I started to pay more attention.

Yes, I’ve noticed a few delay-tactic questions. I thought the queries like “Mom, why are turtles green?” came more at the age of 3 instead of now. They’re still cute at this age. 🙂 But more importantly, there have also been some heartfelt discussions this past week.

Last night she confided that two of her friends were fighting (verbally) and each insisting that Little Chick pick one of them to play with. One even threatened to go to the teacher if LC didn’t pick her. I explained that was OK, as she wasn’t doing anything wrong. We also talked that if they were going to act like that she could walk away and find another friend to play with. Thankfully, she has many friends. Side note: I don’t think it’s a coincidence that the ones that seem to be more stable in their friendship are boys. Ugh. I’m not looking forward to the drama that comes with girl friendships over the next several years.

Anyway, I thought that was going to be the important discussion of the night. Regretfully, it wasn’t. After a few more brief “Mom? One more thing…”s about what she’d done in school that day, she delayed me one more time….

“I’m never going to smoke or drink alcohol”. They’ve talked about the dangers of both in Guidance, especially how alcohol affects young brains. I started to respond to her statement with one of my own when she interrupted and explained how a “teenager”* girl at the school smokes – and she goes into the bathroom to drink alcohol.

* probably 5th grade, since it’s happening in the elementary school

My heart stopped. Not because my daughter had to witness that behavior or be exposed to illegal activities. There will be many things I can’t protect her from in life; it’s better that she knows how to deal with different situations.

Instead, my heart weeps for that young child. I can’t even imagine what pain / trauma / abuse that child must be dealing with to cause her to consume alcohol. I know kids are likely to to imbibe in social situations and under peer pressure. But sneaking into the bathroom during school? There’s clearly a underlying problem there.

Part of me wanted to tell LC to talk to the principal about it, but after discussing with my husband, we’ve decided we will do it instead, given the seriousness of the situation. It might be a bit much for a 2nd grader to report the actions of an older schoolmate to the principal. I feel it’s more important that she felt safe in telling any grownup about what was happening.

I know there will always be drinking, drugs, smoking, etc. going on in school – it happens even in Christian schools. But it’s important to maintain open communications with your children to be sure they are willing to tell you what is happening around them – or to them. Bedtime is a great time to do that, even as they get older. If that doesn’t work, try and make sure to have a meal – or a few hours each week that aren’t filled with busyness, television / cell phones, etc. so they can relax and open up about anything – trivial or serious.

For those that are parents, when did you find was the best time to talk with your children?

No comments yet
children