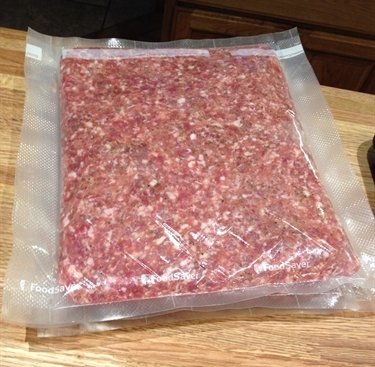 It’s not unusual for our area to see first flurries in the beginning of October.  Certainly by the end of October we’ve had at least one snowfall.  We had been blessed with unseasonably warm weather throughout the last couple of months.  Finley has loved our weather because he likes nothing more than to lay out all day in the sunshine 🙂 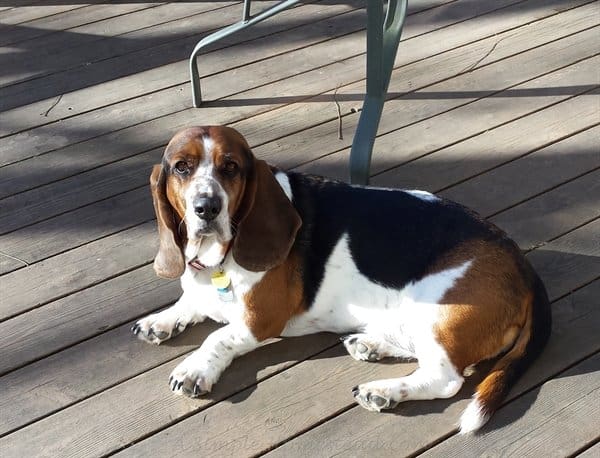 All that changed on Saturday.  The temps dropped, the wind whipped and we saw a few flurries (not enough to even photograph).

Saturday was the opening day of gun deer hunting in Wisconsin.  Papa had planned to go out early that morning like every other year, but with the wind as crazy as it was he knew it wasn’t worth it.  Deer don’t like it when it’s windy – they rely on their sense of hearing for safety.  Pretty much every hunter we talked to this weekend said they saw zero deer moving around.

On Friday, Papa discovered a great sale on pork shoulders and picked up several packages.  So instead of hunting, he provided for our family by making homemade breakfast sausage!

This is a recipe he’s made several times.  And like most make-it-yourself ideas we’ve tried, we have found it very difficult to go back to mass-produced sausage when we run out!  They’re too fatty, too spicy, too coarsely ground, …  something just isn’t right.  Plus, there’s always the “I don’t know what this is really made from” aspect. 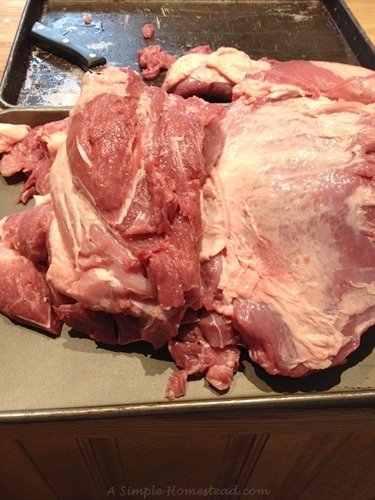 On the other hand, our sausage starts off with a big hunk’o meat like this pork shoulder. Papa cuts it into manageable chunks to go through our grinder. 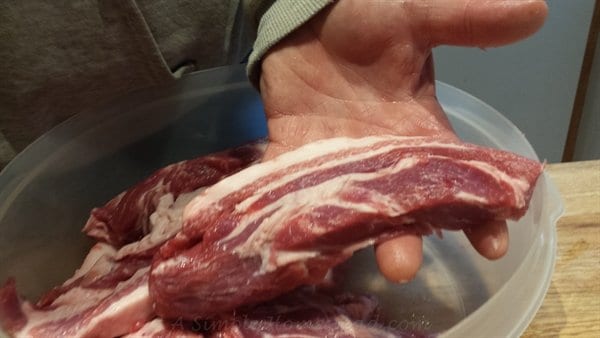 Some of it looks like uncured bacon – and you could use it for making bacon, however that’s another story… 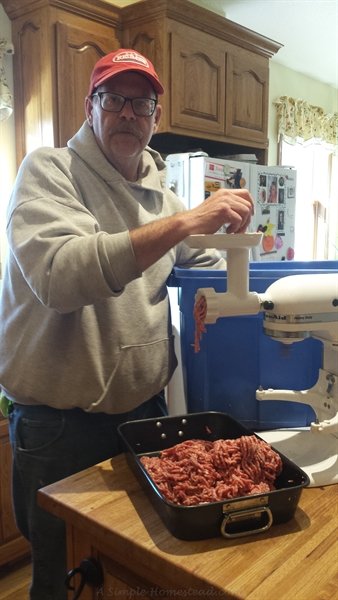 The most difficult process is of course the grinding. We currently using a grinding attachment for our Kitchenaid mixer. It does the job, but it can be slow. Someday we hope to purchase a separate, more powerful grinder but it’s just not in the budget right now. (I’m hoping for a Black Friday / Cyber Monday sale) 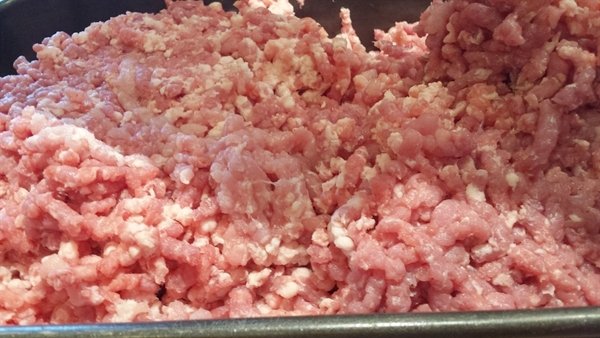 Papa does a two-grind process for a couple of reasons.

Mixing in the spices can be a tough job as well if you’re doing a large batch like we did, only because the meat needs to be kept chilled at all times … so it’s COLD digging your hands in the mix! 🙂 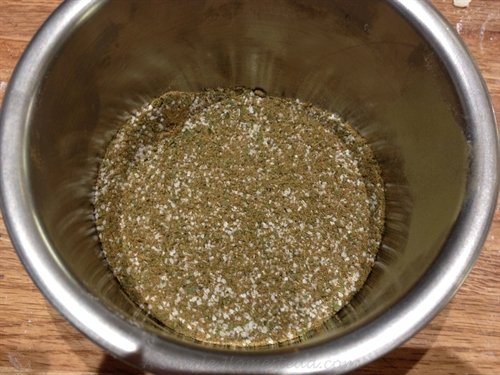 As with everything we do, new knowledge comes with each attempt. This time Papa figured out that for every pound of meat you need 1 Tbsp (or 3 tsp) of spice mix.

You also need a large bowl or container – big enough to hold all the ground meat and yet still stir or mix the spices in. We had 23 lbs of pork to do this time so even our largest kitchen bowl wouldn’t hold it all!  We ended up cleaning out a big plastic container (like a tote) to make it easier to mix. 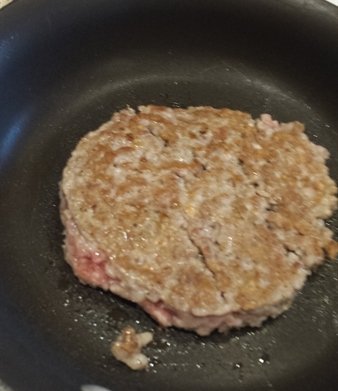 Of course, you have to have a taste test. I’m not sure what we’d do if it didn’t taste right, but it’s a good excuse to have some right away! LOL

A quick note about the MSG in this recipe.  Personally, I have never noticed a difference whether we make it with the MSG or not.  However I know some people, like my sister, have an intolerance to it.  Feel free to leave it out.

Usually we package up the sausage in 2 lb packages, using our trusty vacuum sealer. This year, we’re trying an experiment using fold-over sandwich bags and freezer paper to see how that works. The advantage to the second method is a bit less cost and we can make smaller packages for our family. Not that Little Chick minds “leftovers” … she LOVES sausage!

Another factor I want to mention is the cost.  Our family’s favorite non-homemade sausage is from a company that rhymes with “Dimmy Jean”.  It’s been a while since I’ve shopped for their sausage but if I recall, they charge $3 to $4 per 16 ounce roll.  Papa snagged three pork shoulders on sale for 99¢ / lb.  He had to get more spices for approximately $5 at our local coop*.  Our coop has bulk spices, which is cheaper than buying in small canisters at the grocery store.  Total estimated cost = $28-30 for our 26.5 lbs of sausage.  Retail would have been $80-106!

It took Papa a couple of hours to do all the grinding, mixing and bagging.  I guess I didn’t factor in the cost of the bags either … but we already had those supplies, so I don’t have the numbers handy.  The point is … we saved a lot!

Our freezer is filling up!  Well, that is until Little Chick hits another growth spurt.  They say teenage boys eat a lot.  I don’t know … growing little girls can also have bottomless stomachs! 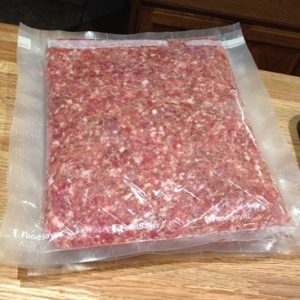