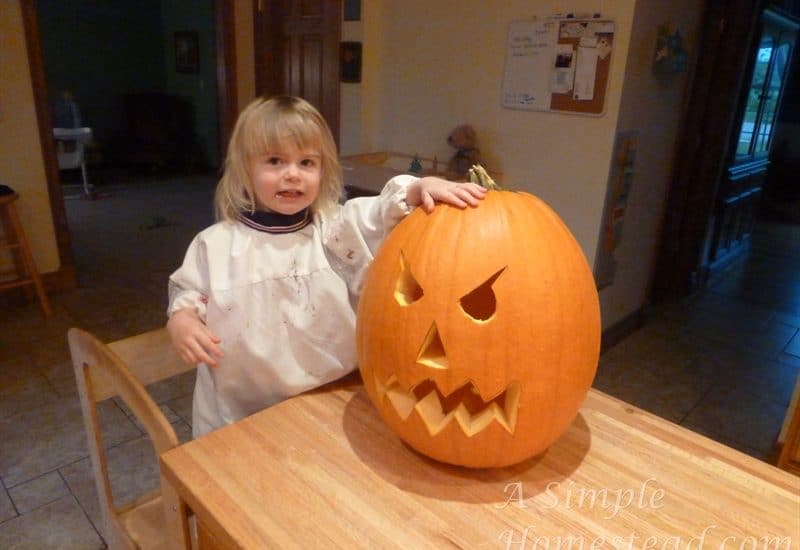 It’s been crazy around our house lately.  I have a bunch of ideas and projects we’ve been working on, but I haven’t had time to sit down and write them yet!  Last week I was at a conference for work in Minneapolis.  Little Chick, Papa and Finley were on their own for four whole days – and they survived!  This week I’ve been playing catch-up at work and battling the second cold in a month that Little Chick has encountered and then passed on to her parents.  I’m ready to be well …

So, what’s been happening in our household?  For one, we’re preparing for Halloween.  Meet Jack.   He’s “scary” and has “a candle in his mouf”.

We went to the local apple orchard a couple of weeks ago.  They have all kinds of activities for the kids:  wagon rides, little pedal tractors, a hay “mountain” to climb, sheep and goats to pet, etc.  Since it’s getting to the end of the season all their medium and large pumpkins were one price.  Papa said if they were all $5 he was going to get one of the big ones.  Jack is almost as big as Little Chick!  Carving him was one of the fun activities they did while I was gone, but I got to enjoy some of the roasted pumpkin seeds.

Our little one is becoming somewhat of a girly-girl.  She occasionally lets us put her hair up in pigtails and they might even stay in for more than 10 minutes!

Way back in March, Papa and I came up with a plan for her Halloween costume this year, based on one of her favorite movies at the time.  However, that has since changed thanks to Disney and their princesses.  Her latest favorite prompted a trip to the store … and some mommy guilt that she as a *gasp* store-bought costume this year.

She absolutely adores Princess Sophia (Sophia the First – Disney Jr) and thankfully we were able to snag the dress on sale.  It’s cheaply made and probably won’t last long – especially since it’s been worn about every other day.  If you’ve ever seen the show, Sophia wears a magical amulet.  One day while I was at work, Little Chick came downstairs wearing one of Mommy’s “amulets” (necklace).  Papa took it away from her and found something else for her to wear instead.

Although … we’re not sure where it is at this point.  She wore it almost consistently for several days and now it seems to be missing.  *sigh*

Given the fact that the purchased costume was so cheaply made, that she loves princesses, and all the mommy guilt … I swore the next dress / costume would be hand-made.  Fortunately, Hancock Fabric just had a Halloween costume fabric sale – up to 50% off!  This neat little bundle arrived this week.

I had these grand illusions that I would have lots of time while at the conference to knit and crochet.  Not.  I had a couple of hours the first night we were there because all we had to do was check-in at the hotel and conference and then find some dinner.  The other two days we were busy from 7:30am until 9pm at night!  One other night I did a little bit of work on my doily just to settle down.

At home, I’ve been busy working on a surprise.   I know the recipient will read about this and realize this is for her … because it was promised a long time ago.  Here are some sneak peek pictures.

I’m hoping to finish it this weekend and tell you more details next week.

Despite being physically sick and tired this week, my spirits have been good … the mailman has been a frequent visitor, bringing lots of goodies.  Here are three items I won in the last few weeks that all arrived within a few days!

Are you jealous?! 🙂  The yarn is Joy Metallic ruffle yarn from Plymouth Yarn.  They included a pattern for a ruffle scarf, but I’m thinking it might make up into a cute ruffly skirt for my favorite little girl.

And that’s probably enough miscellaneous updates for one post.  I hope to get back on a regular posting schedule next week.  See you soon!