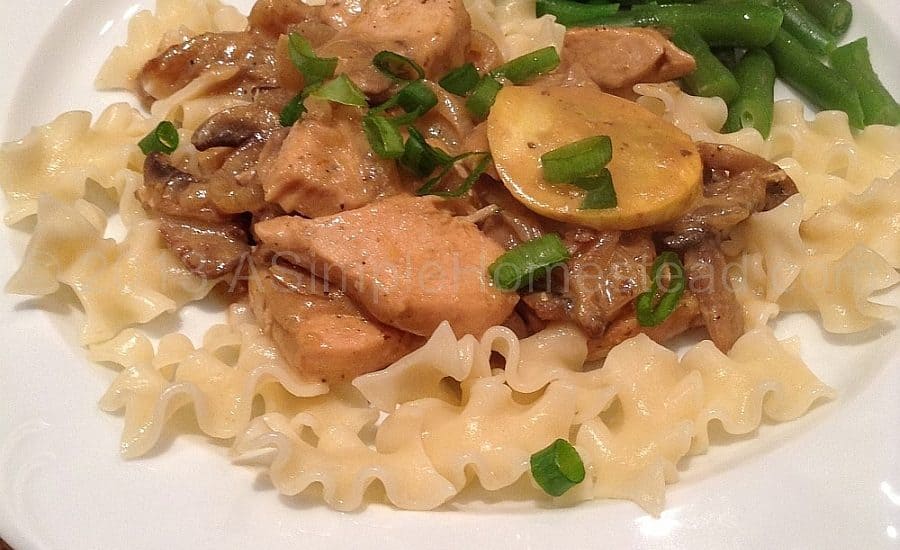 This recipe originally was inspired by a Better Homes & Garden recipe called “Chicken with Mushroom-Peppercorn Sauce” in the book Quick, Heathly and Delicious Cooking.  Over the years, I’ve played with this recipe enough to make it quite my own.  I haven’t made this dish in quite a while – long enough for my husband to forget what this tasted like.  After making it tonight, he confirmed it is a winner … so maybe I’ll have to do more cooking now 🙂

I’ve found the recipe to be very forgiving.  You can add other vegetables – like tonight I added yellow summer squash (a.k.a. yellow zucchini) and the green onion tops.  If you use vegetables like this, I would recommend adding towards the very end of cooking as they don’t need much and you don’t want them to get soggy.  You throw in some additional spices too – like basil or tarragon.  Feel free to experiment!

Mix together the broth, milk, pepper, flour, sherry, mustard, garlic powder and any other spices you prefer.  Set aside.

Add 2 tablespoons of olive oil to a deep frying pan over medium heat.

Just before finished cooking, add any other quick-cooking vegetables to the pan such as yellow zucchini or scallions (green onions).  Can you see the crispy bits in the bottom of the pan?

Remove chicken and vegetable mixture from heat and set aside in a separate dish.

In the same frying pan, add the broth mixture.  Stir over low heat.  In the picture below I only poured part of the mixture so you can see how the sauce will soften those nice caramelized bits in the pan and add color and flavor to the sauce.