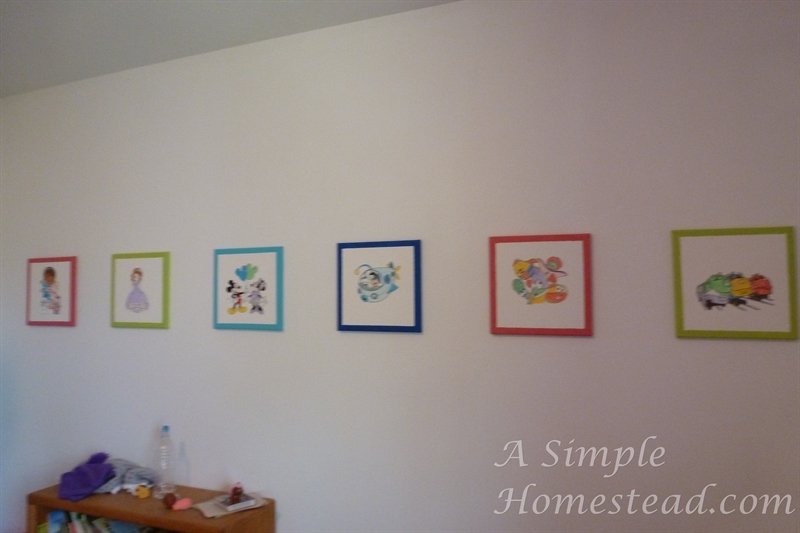 This post has been a long time coming … almost two years in fact! I started thinking about writing it when we switched Little Chick over to a toddler bed and we did a bit of remodeling to her room.

Flashback to almost 11 years ago: one weekend we had family come over to the house to help us work on some of the finish work while we were building. I don’t remember what Papa and my father worked on that weekend. I can picture my father-in-law painting the front door and installing the door handle. I remember my mother-in-law in the garage staining acres of wood trim. And I have this vision of my mother, sweating in the hot, non air-conditioned upstairs, working hard at getting a coat of paint on all the bedroom walls!

Then the house was “finished” and some of those rooms never got touched again. If we were going to fix-up Little Chick’s room, this was be a good time to refresh the paint! 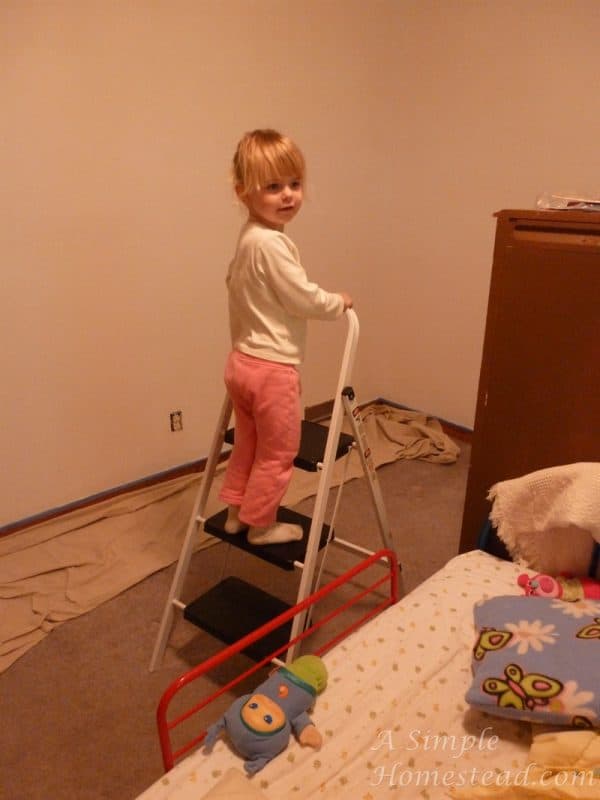 Check out how little she was two years ago (except her pants were still short)!! She sure wanted to help – or at least take her turn on the ladder. 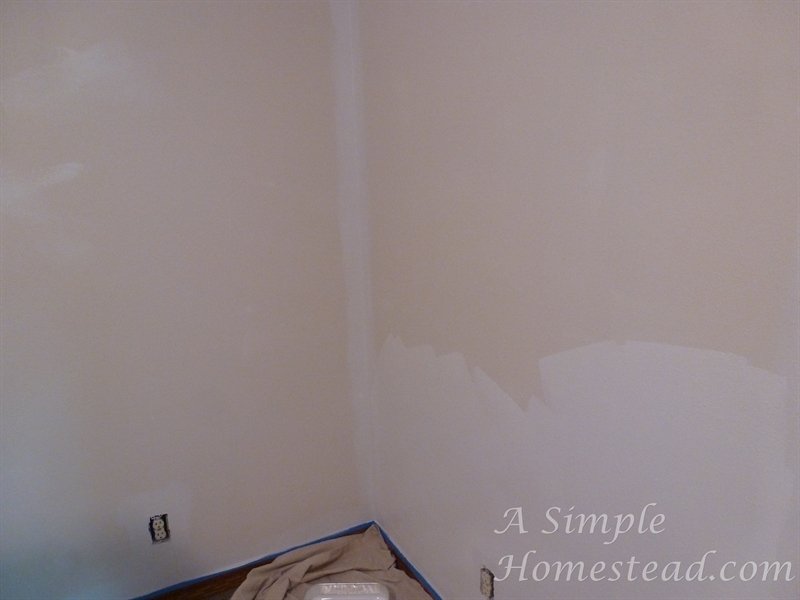 We decided to still go with a white paint but apparently picked a brighter color than what was there before. Granted, wet paint always looks brighter, but even so it helped to lighten up the room (it also showed how dirty the walls had gotten in some areas!)

The carpet is a neutral light grey, but never fear – there was color to come. 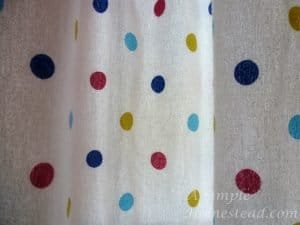 They were my 50¢ purchase that ended up to be the basis for the whole room. We all know how enamored Little Chick is with the color pink – this is a great way to have some pink but also incorporate a few other colors. 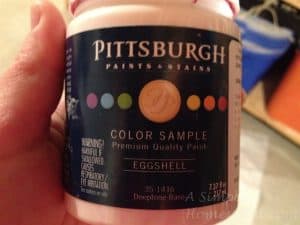 I think they’re meant so you can get one or two of them to paint a section of wall before committing to painting the whole room. For us, it was the perfect size for adding multiple colors in small amounts to the room. We picked up the colors:

* the original navy blue used in the projects below was later completely used up for a project that failed. I didn’t mark down what the original color was, and when we did this year’s project we picked up a color called Egyptian Violet. It’s not the same color as the original.

One of the first things I did was to work on some additional lighting. My grandpa was a skilled woodworker that had a shop set up in our basement for the many years he lived with us. I have fond memories of him working down there. One of the items he made were these simple pump lamps. I can’t remember if he painted them or if my mother did, but he’s been gone for over 20 years and this lamp looked like it needed some TLC. 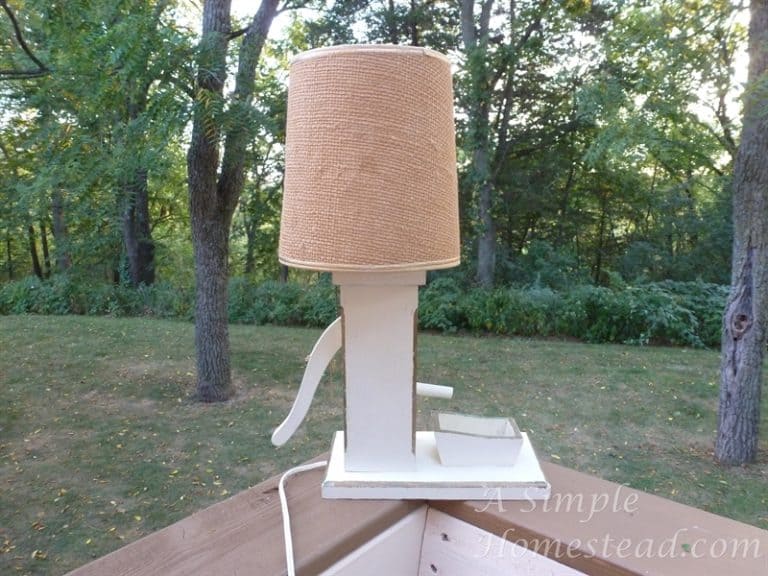 Half a pint doesn’t seem like a lot of paint, but I don’t think I used even a third of that to completely repaint the lamp. With a new lampshade, this was a cute little light for the room! 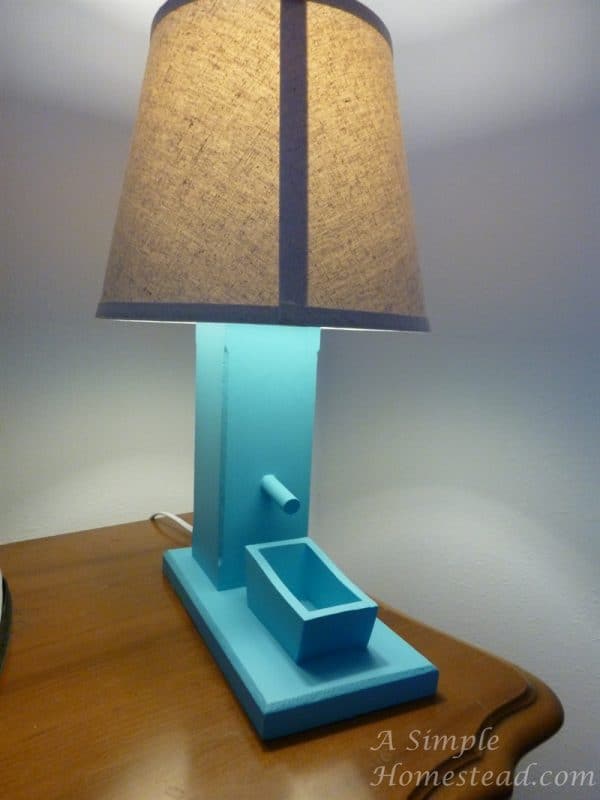 Next up were some wall decorations to help add color to the room. I had this great idea to pick up some 12″ x 12″ canvas boards at Michaels and put her favorite movie and tv characters on them. Downloading coloring book pictures from the internet is easy enough.

Then panic set in. I am NOT a painter! How in the world was I going to make these look halfway decent? The idea sat for a while until one day I was perusing my craft room supplies and realized that in one of the contests I had won, they had included some fabric markers with medium-fine tips. I just had to try them to see if they would work on the canvas, and they did! Lucky me. 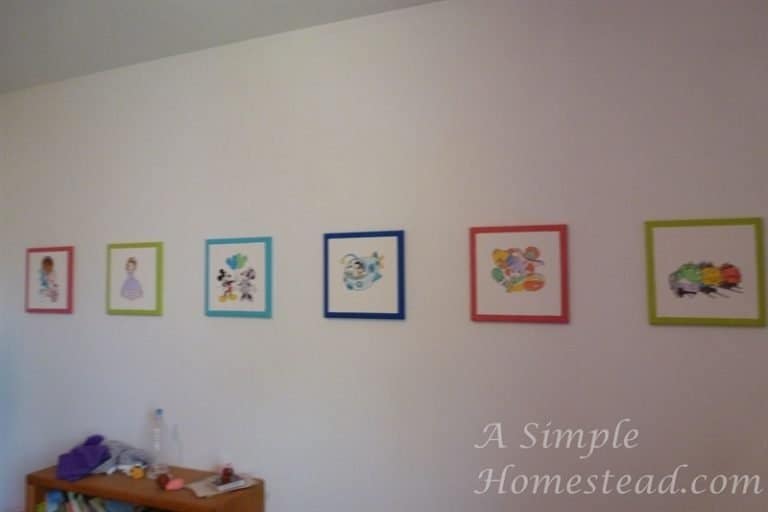 Papa and I worked together and masked off the edges of the boards with painters tape and I used the four colors to create bordering frames.

Then I took the coloring pages I had found, taped them to the back of the canvas boards and with the help of a light box, matched the outline tracings of the coloring pages. After that it was easy – except in some cases I had to keep referring to colored images off the internet to make sure I got the colors close. 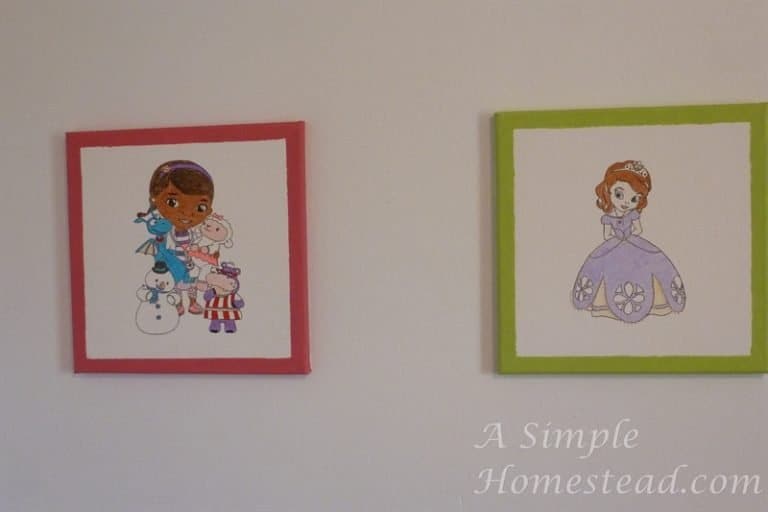 There are six boards in all. Doc McStuffins with all her toy friends and Sofia the First, both from Disney Jr. Papa thinks Sofia looks lonely and I should add her step-brother and sister in there, but I haven’t gotten around to it yet. 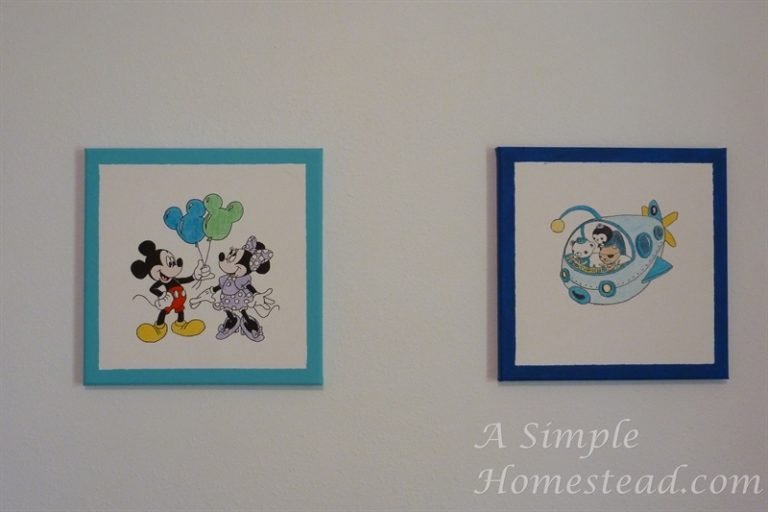 Then there are the familiar characters Mickey Mouse and Minnie, along with the Octonauts (also Disney Jr) with Captain Barnacles, Peso and Kwazii. 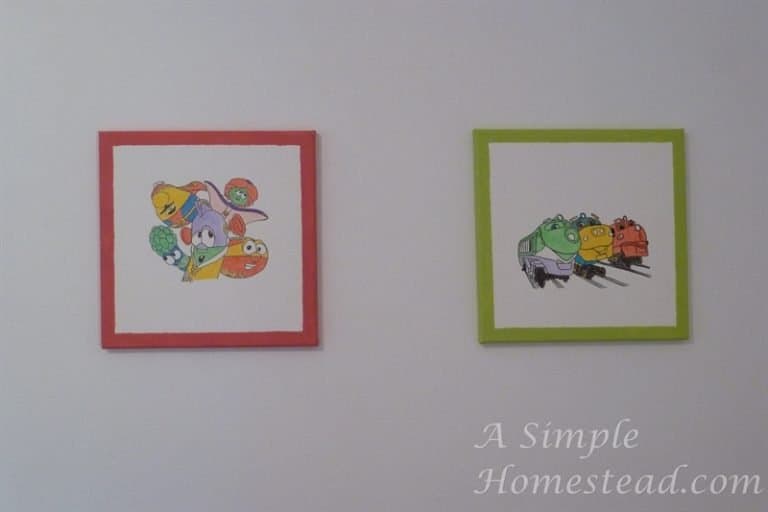 And last but not least, we have Veggie Tales – from The League of Incredible Vegetables movie and Chuggington’s Koko, Brewster and Wilson.

Two years later, I’m already thinking I should change out some of these pictures, but I can’t get our daughter to decide which ones to keep. I think she just wants to add more pictures (Papa would love to put more holes in the walls). Plus, her likes seem to change more rapidly. This week it seems to be all about My Little Pony. 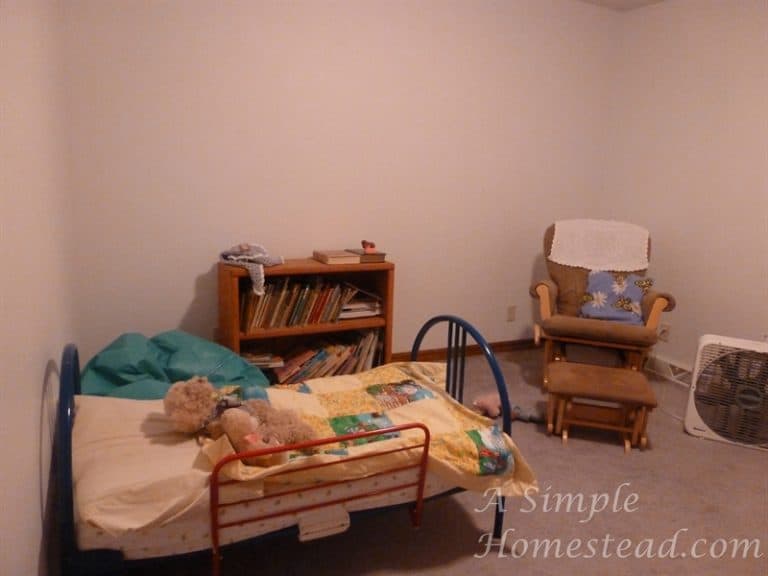 In some ways, seeing this bed picture makes me sad. She quickly outgrew the toddler bed and has a big bed now.

One last room decoration I’d like to show today. This may be really hard to see…

Can you see where it looks like the ceiling needs to be repainted? Those are free-painted stars (blots) and planets that Papa drew on the ceiling with some glow-in-the-dark paint. 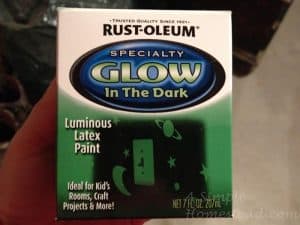 They don’t shine for long; maybe 5 min. But it’s fun to spot them again when you first turn out the light at night! 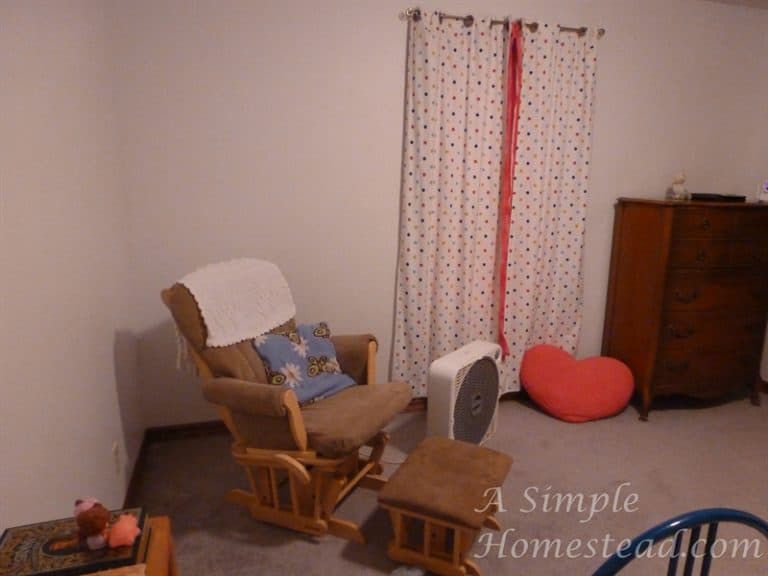 Later this week / next week I’ll show you our latest project for her room!

One Reply to “A big girl’s bedroom”