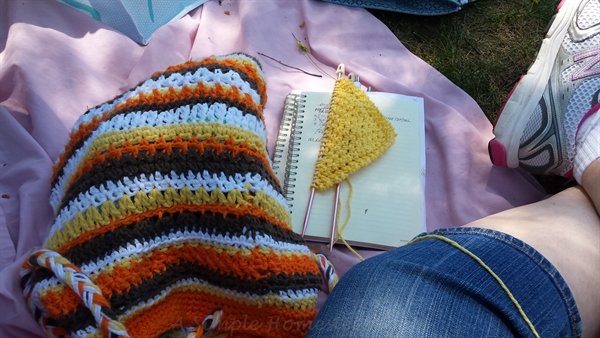 Yesterday (June 10) was World Wide Knit in Public Day.  It’s an annual event that encourages knitters and crocheters to get out of their homes and show the world their craft.  Anyone can organize an event – yarn shops, guilds or private individuals.  I know there were at least two gatherings in our area.

My parents just flew in from Florida late this week, so it was a great opportunity to pick Mom up and take her with me to a gathering in Cameron Park in LaCrosse!  She originally told me she didn’t have any projects going … but then brought several projects with her to the knitting event.  Now I know where I get that from 🙂

I “only” worked on two of my projects – one knit and one crochet, but in the 1.5 hours we were there I continuously switched and worked on each at least twice!

Mom worked on a fuzzy cowl (shown above), a corner-to-corner (C2C) baby blanket and some leaf motifs that have been long-running project.  I worked all in cotton – washcloths and a sunglasses case I’ve decided I need.  I didn’t want to work on anything heavy while in the park.

We were fortunate.  The forecast for the day was over 90°F (32°C) but it was very windy – and there’s plenty of shade in the park, so it was quite pleasant!

I was able to see some old friends – Kait and Carolyn from Chain344 Podcast.  They recently announced on their latest podcast that they are opening a yarn shop in LaCrosse, WI.  I am so excited for them!  It’s not opening until early August, but you can be sure I’ll be willing to help them out financially LOL!

Right now I think most of their updates are through the podcast, but they do have an instagram account just for the shop: @unwound_shop.

Kait and Carolyn commented on matchy Mom and I were … but look at their matching outfits!  Great minds think alike!!

After crafting for a while, Mom and I took advantage of the fact that we were together and did our favorite things: go eat Chinese food (our families don’t care for it) and shop.  But we don’t just do general shopping.  We prefer craft stores where we can encourage each other to spend more than we ought to. 🙂

When Hancock Fabric closed last year, it left a gaping hole in our craft community.  We still had Michaels and Hobby Lobby, but thankfully Joann took over the empty building to give us that wide selection of options again.  Neither of us had been to Joann since it opened, so we stopped there after filling our bellies.  We were just going to wander and check things out.  Yeah, right.

Both of us ending up snagging quite a few strands of beads to use for making stitch markers.  I mean, who can pass up a 70% off deal?!  Not me.

Now I just have to make them into something…  Mom and I need to schedule a play date!

I’d love to hear … Have you ever crafted in public?