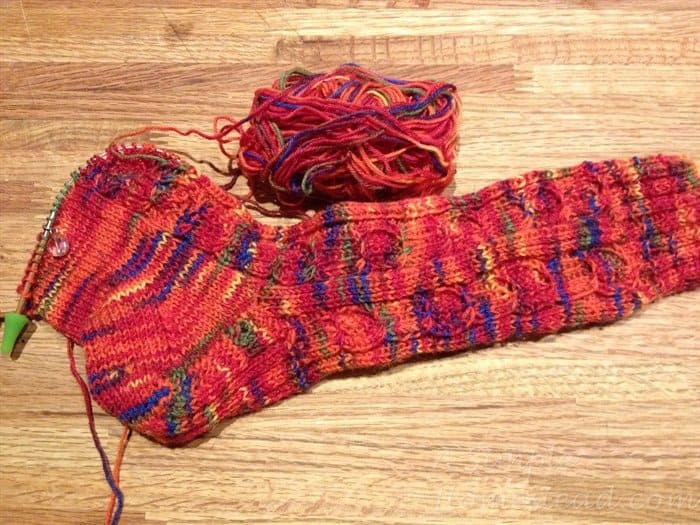 Sadly, I don’t have a finished project to show off this Friday.  I’ve been busy knitting – mostly on the “Little Pumpkins” Socks I talked about last week.

You can sort-of see the pumpkin shapes running down the length of the socks, but they’re not as evident with a multi-colored yarn such as I’m using.  They look better in the original.

Despite the work I’ve put into them, I may just turn around and frog the one sock.  Why?

1) I think this pattern would look better in a more solid color.

2) it didn’t dawn on me until I was at the heel that I’m really not a fan of long socks; I wore them for years but discovered recently that I prefer shorter just-above-the-ankle type socks.  I should have made fewer repeats of the pumpkin motifs.

3) I goofed on a couple of the pumpkins and make them two rows too short.  I doubt it’s noticeable unless I point it out, but it bugs me.

and probably the most important:

4) it looks like I’m going to run out of yarn before I finish my sock!  I do have a second ball for the second sock, but if I start using that I won’t have enough for both socks.

I suppose I could just continue on until I run out of yarn and then finish the toes in a different yarn, but my sock yarn stash is rather lean and it would require buying something that would coordinate well.  I’m trying to be good and not buy yarn (this week LOL).  Either way it looks like I won’t get these done by the 15th, which is when the first KAL (knit-a-long) ends that I wanted to enter.  I could still finish and enter in several “Socktober” KALs.

I’ve also been working my Harvest Leaf Bag.  I forgot to take a picture this morning but really at this point it’s just a tube of stockinette in one color.  I haven’t gotten the pattern repeats yet.  I’ve adjusted my leaf design and my latest sample appears to look more like a leaf when knitted up. 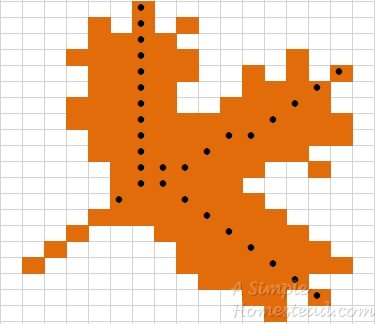 I had to take a small break from the projects I wanted to work on because for some reason on Wednesday, Little Chick was horribly upset that Barbie didn’t have any “glass slippers” or shoes to wear!  Horrors!  Well, I do have to say, it is getting colder outside (and in our house), so I made her some slippers to wear. 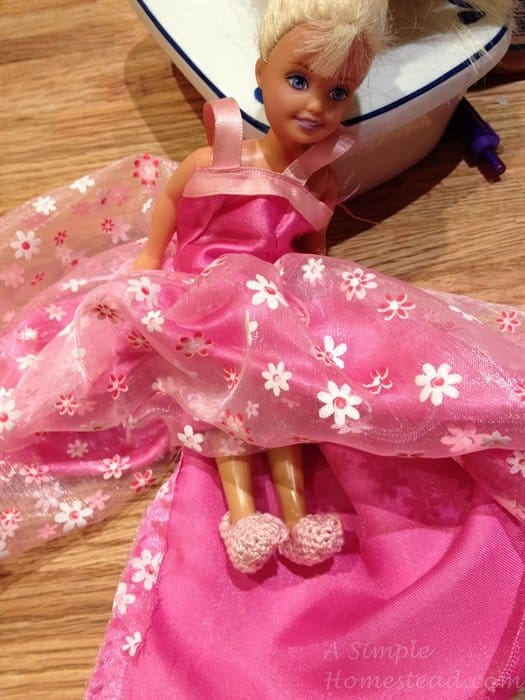 I just sort of winged-it on the first one and then tried to duplicate on the second.  They aren’t exactly the same size, but they work for now.

No comments yet
knitting wip