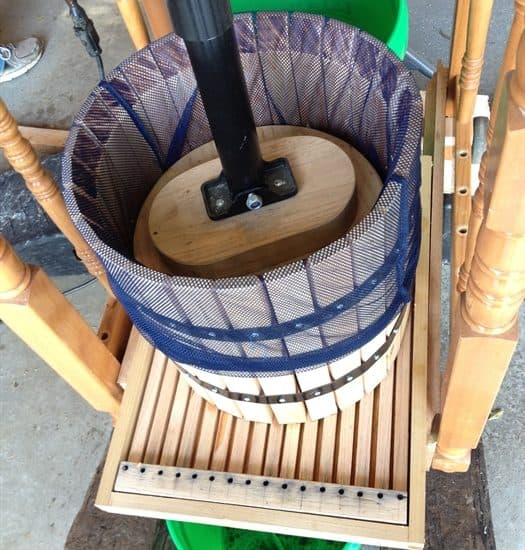 October means apples.  To some extent, September too.  But this is the month where we need to make sure we have all the apples we need for the coming winter.

When we lived in town, our neighbors had an apple press.  They’d get several bushels of apples from a local orchard and spend an afternoon grinding and pressing those apples into juice.  We’d often help for the “payment” of a gallon or two of juice.  When we moved to our current location, Papa decided he wanted to build his own press.  He started it a year or two before Little Chick was born but then it sat as an unfinished project until last year. 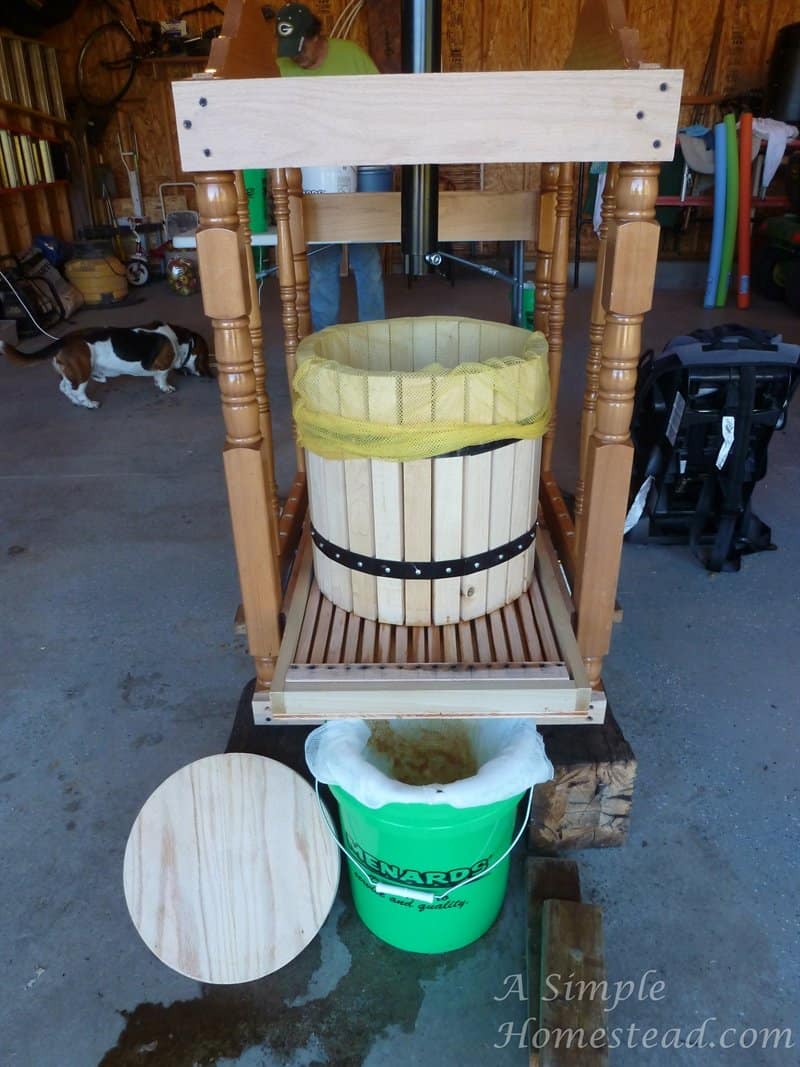 That’s when he got the bright idea to reuse the ends of the crib that Little Chick had outgrown to build a frame to hold the press.  We figured it would make good use of drop-sided crib since you’re not supposed to resell those anymore.

First you purchase a bunch of apple seconds. 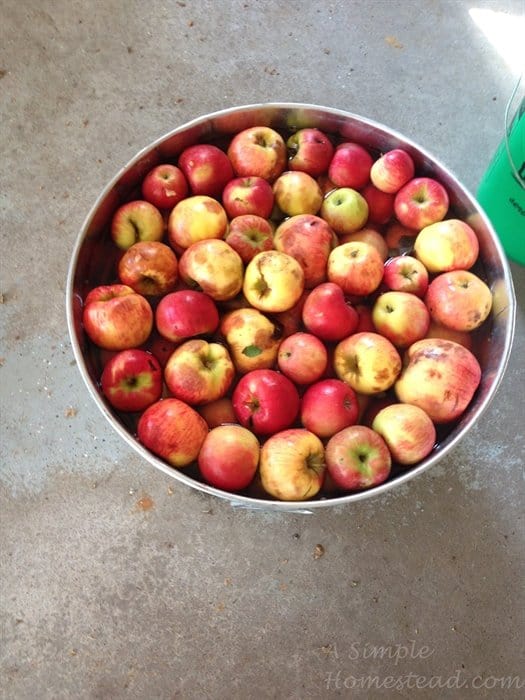 They don’t have to look pretty – they’re going to be mushed unrecognizable anyway.   We just cut off the really bad bruises and rotten parts.

Last year we used our food processor to grind the apples.  It was a pain because you could only do a few apples before you had to basically taken the whole thing apart in order to empty it and then start over again.  But it was effective.  Even with the delays it still goes quickly because you can leave the stems, seeds and cores in the apples. 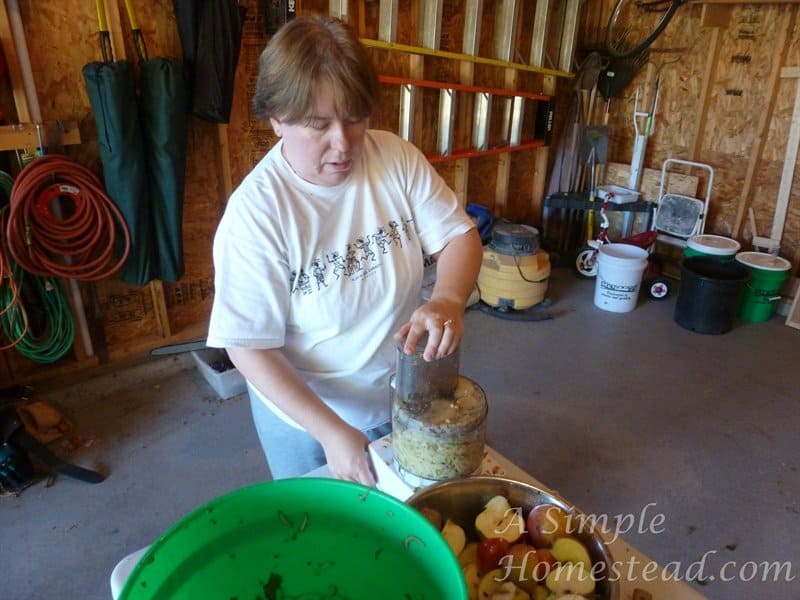 The ground apples went into a bag lining the press, until the bag was at least 3/4 full. 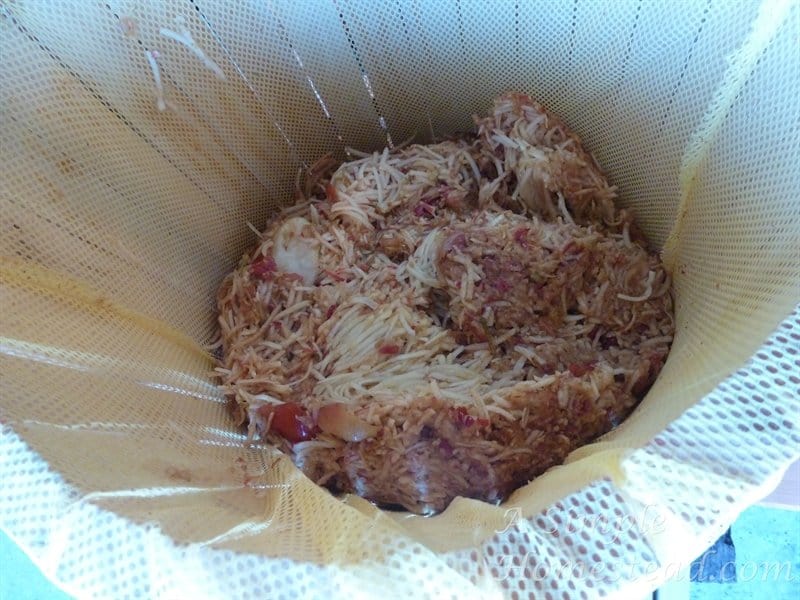 Then the top plate is lowered on top of the chopped apples and pressure is applied to squeeze them. 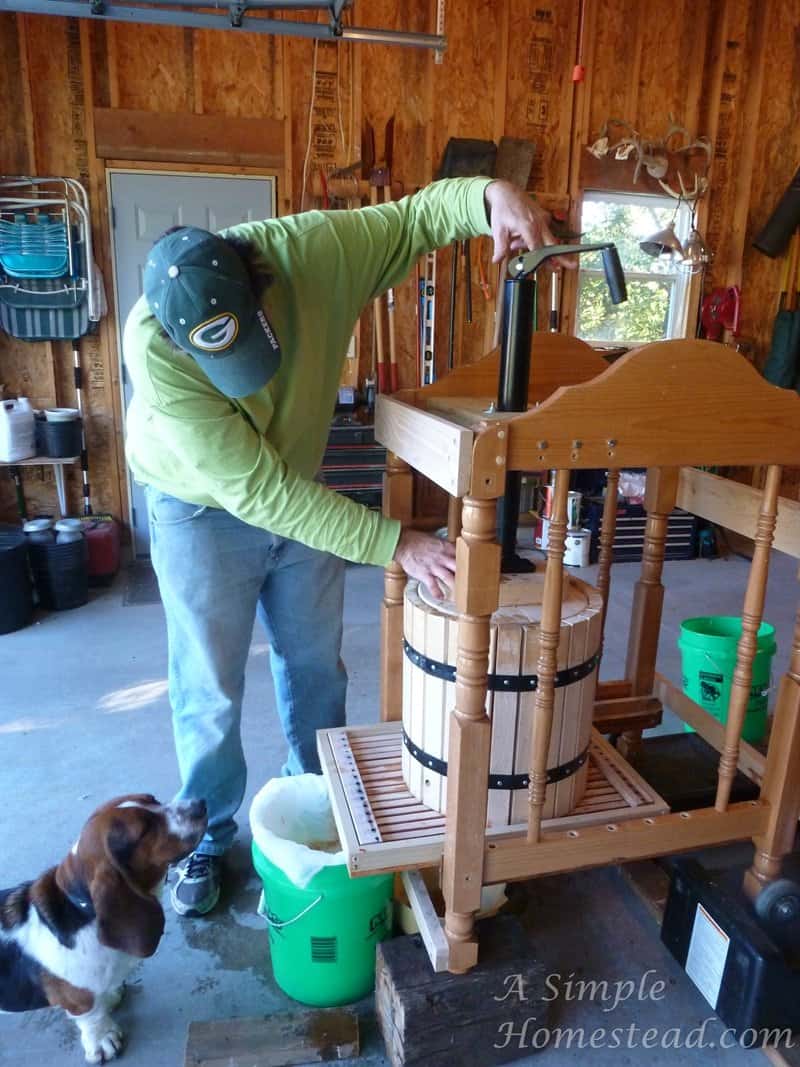 In this case we’re using a jack to help create pressure.  Juice runs out through the sides and out the bottom of the press where it gets channeled  towards a single hole in the front center. 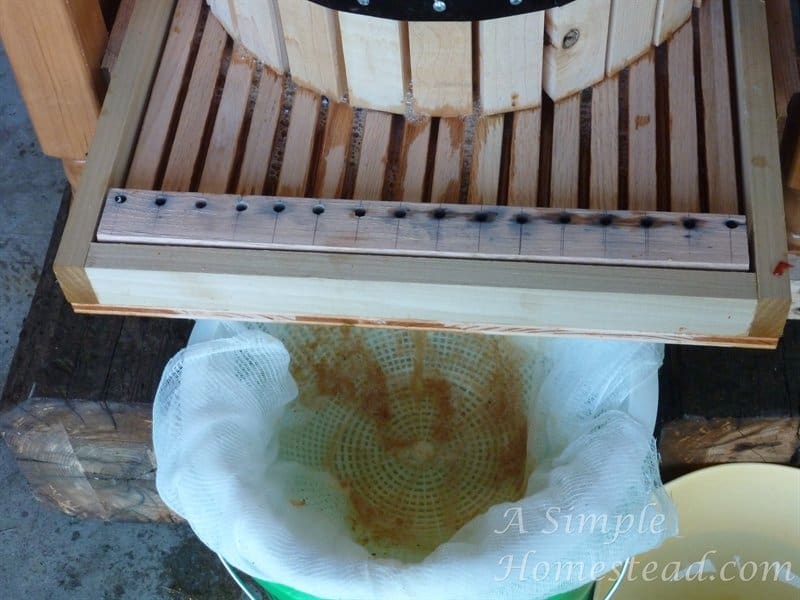 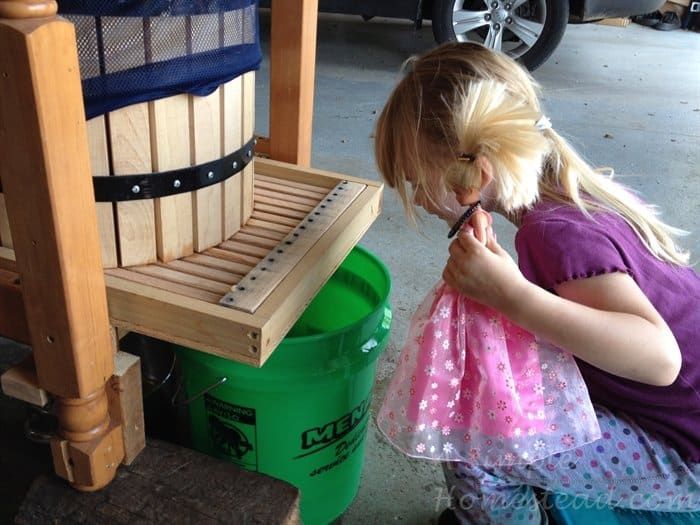 Hopefully there is a lot of juice that comes out.

This year Papa tried to make some improvements.  The one that isn’t really visible is that the frame was reinforced.  At the end of our pressing last year something cracked – we had applied too much pressure and the frame couldn’t support it.

The second improvement he did was to add an apple grinder to the top that would grind the apples for us and drop them into the bucket below.  He used a motor pulled out of a old washing machine. 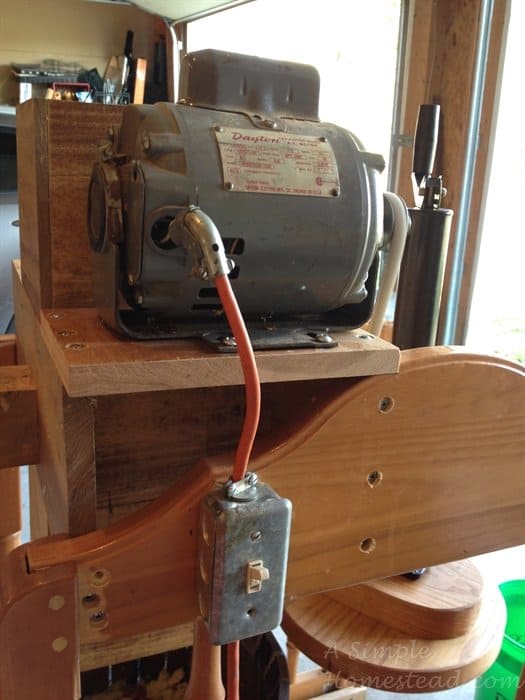 It was connected via a belt to a couple of pulleys on the front which you can sort of see here behind the jack/press mechanism. 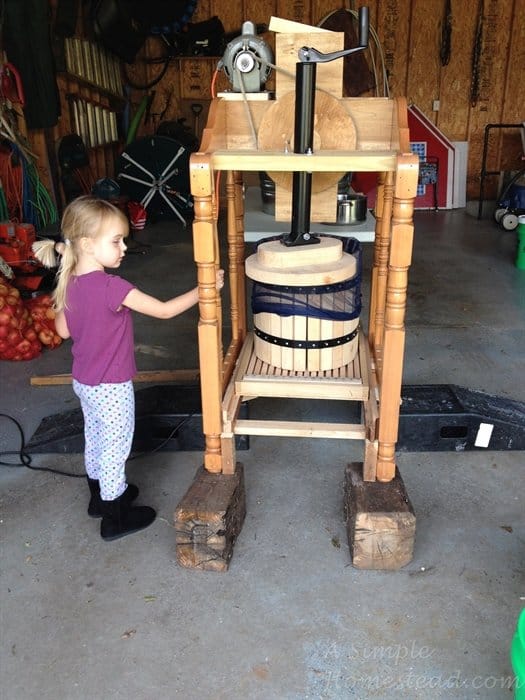 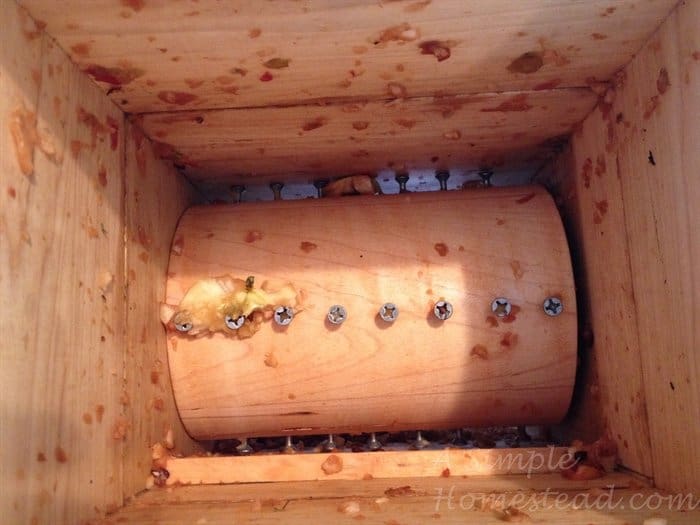 Here it is in action.

Now, while the grinder saved us a lot of time and we pressed a lot more apples, it was lacking in efficiency.  This is how the apples looked ground by our new grinder.

The pieces are obviously much larger than what we got with the food processor.  We did an experiment and ran one of those buckets back through the food processor to grind them smaller and see how much more we got.  One bucket had produced about 2-3 gallons.  Running it through with a smaller grind we got at least another gallon to 1.5 gallons in additional juice.  So … we need to make some more improvements for next year (and by we, I mean my husband LOL).

Funny thing is, I don’t think our grinder version resulted in any larger pieces than our friends used to get.  But it still seemed like such a waste.  Sort of.  It made the chickens REALLY HAPPY that day as they got most of the scraps!

Also, Papa took one of the buckets (not the one we second-ground) and was actually able to make applesauce; there was that much juice left in those apples!  He already has his eye on trying to create a secondary grinder underneath, similar to the way the food processor works.  Should be interesting! 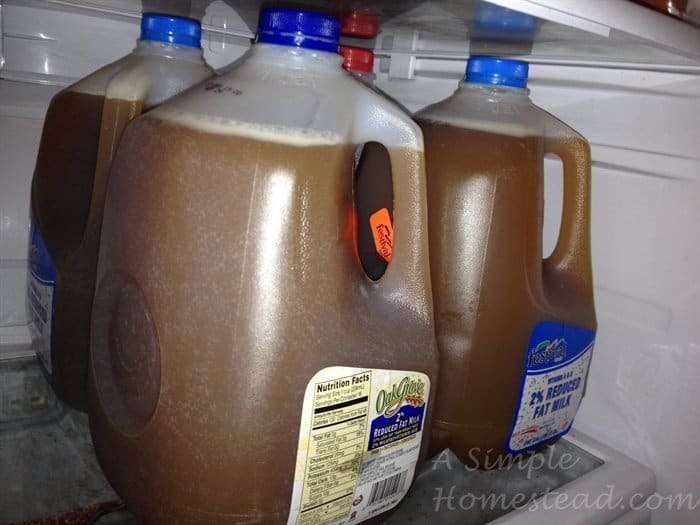 So what can you do with all that juice?  Well, most of the juice we created ended up getting processed in quart-sized canning jars.  Some Papa took and tried to make apple “soda” – by letting it create just a few bubbles and then pasteurizing the capped bottles (heating them) so the yeast would be killed.

Not a great picture, but they are currently in a tote … for our protection.  They were in a box earlier this week and then Monday I woke at 5:45am thinking either that our daughter was sleep-walking or we had an intruder because I had a clanging sound impede my dream so vividly it woke me up.  I didn’t hear anything again and fell back to sleep.  Papa discovered later that two of the bottles had exploded.  Oops.  I guess they weren’t heated high enough.  He recapped and heated them all again although most are only 1/2 full (when he uncapped a LOT of fizzy bubbles came out).  Live and learn.

We ended up with approximately 10 gallons of juice.  Half that juice is currently fermented into hard cider – but I’ll talk about that another time. 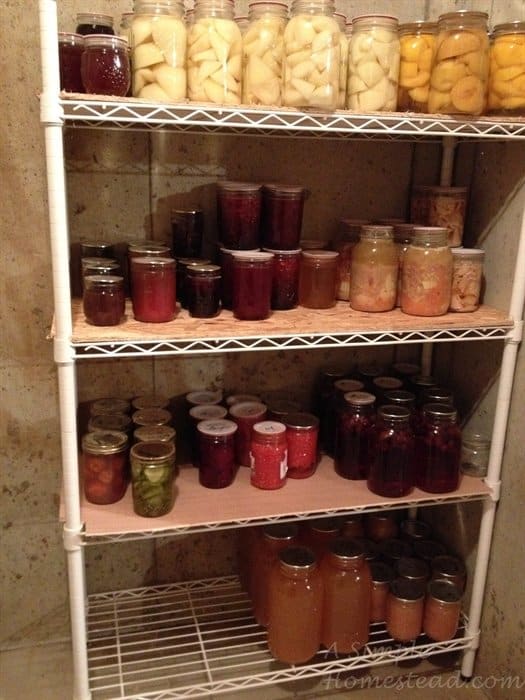 This is what our root cellar currently looks like.  This year’s grape jam, pears and peaches on the top shelf.  Last year’s grape jam, strawberry jam, black raspberry jam, apple jelly, canned soup and shredded chicken on the second shelf.  Plums (that are old and should get tossed), pickles, beet pickles, tomatoes and grape juice on the third shelf.  And finally apple juice and apple sauce on the bottom shelf.  It may not seem like a lot but then again we’re a small family.  We also have some fruits and vegetables in our basement freezer.

Are you stocked up for the winter? Feel free to share in the comments!