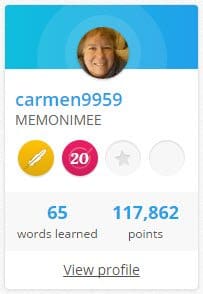 Translation: “Do you speak Norwegian?”

I can’t, but I’m learning! I took a Norwegian class as a continuing education course years (decades?) ago, but didn’t get very far as it was a short-lived class (6 or 8 weeks).

In January, my friend Carolyn from Chain 344 Podcast posted on Instagram that she was on a forced hiatus from knitting/crocheting due to some pain issues. In the meantime she decided she was going to learn Norwegian and Russian. At. The. Same. Time. I’ve long thought she was crazy 🙂

I asked how she was planning to learn and started off on my own adventure. I’m going to explain some of the great resources I’ve found and review them.

Duolingo is what Carolyn said she was using for her language learning and so that is where I started too. So far, this is my absolute favorite resource! They have groups of lessons to work on, you can set goals (e.g. 10 min per day) and review sections.

As you work through the lessons you earn Lingots, a virtual “currency” that you can use to wager double-or-nothing points for the week, or purchase a streak freeze that will keep your streak to remain even if you miss a day.

If I have any complaint about Duolingo is that when you are learning new words on the app, it doesn’t tell you ahead of time what they mean. They ARE highlighted and you can click on the word to view what it means but there’s no advanced information. Then again, maybe that makes the word stick better in your brain as it says “I don’t know what that is?!”  I only recently discovered there are additional resources on their website that explain conjugations, meanings, and other normal language hints.

Did I mention that the app is FREE?!  There are advertisements, but they’re just a single screen that appears when you finish a lesson.  You only need to click “Continue” to get past it.

I’m currently on day 35 of my study streak and on level 8 of Norwegian (Bokmål).  I’m actually taking it really slow and reviewing past lessons often until I feel I’ve mastered them.  The past couple of days I haven’t done much review and it shows.  I’m making a lot more errors.

Sometimes I wonder if the phrases they have you work on are random but most make sense.  I just hope I never have to use “Ulven spiser meg”:  The wolf is eating me.  Yeah.  If that ever happens I doubt I’d be trying to translate into Norwegian 😀

Other times, I think somebody at Duolingo must have a sense of humor: 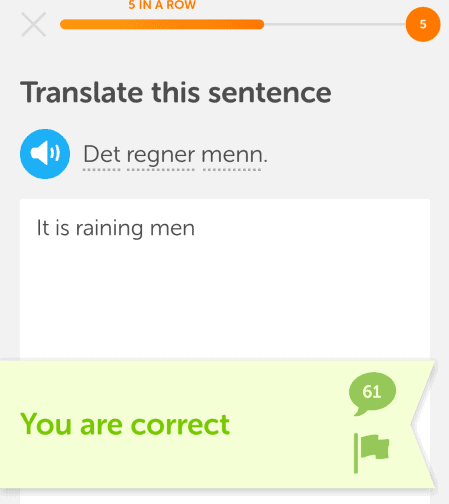 A couple of weeks after I started on DuoLingo, I saw recommendations for another app: Memrise.

I like this app.  The look and feel of this one is rocket ship themed.  Very science-y :-).  What’s neat about this method is you can create “mems” – memory helpers.  Mems that other people create also appear, and I have to say some of them have really helped!

Many of the words in the early levels of Memrise have been different from Duolingo, so I’ve actually learned more in a short period of time than I would with just one app.

Unlike Duolingo, Memrise reviews words before you start the quizzes.  Both apps quiz you multiple ways – selecting words, typing the words (so you have to remember spellings), listening and translating.

My one problem with Memrise is the Speed Review.  But that’s not the fault of the app … I just don’t do well under the timed review :-).

If you join, feel free to “friend” me on either app!

It goes without saying that each of these offers more languages than just English to Norwegian. Someday maybe I’ll add another language, but not yet.
I did learn about another resource – by Innovative Language called LanguagePod101.com. Each language has their own website and you can sign up for their Word of the day like this:

However, I’m not nearly as enamored of this site. It seems I’ve had more sales pitch emails from them than anything else. We’ll see if that’s just an intro problem or not.

Have you learned another language as an adult? Do you  have any tips for me?