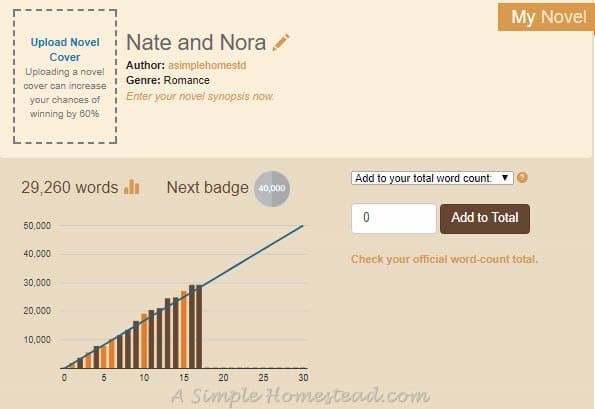 In keeping with my pantser status (I’ll explain later), I’m writing today about something completely different.  Most of you probably looked at the title of this post and thought “Huh?”  I’m hoping there might be a few out there that recognize this acronym.

NaNoWriMo stands for National Novel Writing Month.  It’s an annual event with thousands of participants – last year it was over 300,000!  The goal is in 30 days (the month of November) to write 50,000 words – or in essence, a novel.

NaNoWriMo is run off of this site: nanowrimo.org.  It’s full of encouragement tips, forums, local groups, trackers (for your word count, goals, etc.).  You can even pick up some NaNoWriMo swag.  As it looks like I might actually reach my goal, I ordered a “Superpowered Noveling” t-shirt last weekend; I’m hoping it arrives in a couple of days.

As geeky as I am, I love that I can enter my word count daily have the site show me in graph form how I’m doing:

However, I do have to say this about my novel … NO ONE is going to read this first draft!  It’s worse than doggy doo.  But I’ve come to understand that most people write absolute garbage the first go around.  It’s in the 1st and 2nd edits or revisions that the story starts to come together.

Did you ever see the film Romancing the Stone?  I was recently reminded of the beginning scene where Joan (Kathleen Turner) is typing (on a typewriter no less!) her romance novel.  She finishes, pulls the final paper out of the typewriter and after celebrating with her cat, takes her typed sheets to her editor.

Yeah.  I doubt anyone is that good without some prior editing.  As yesterday’s pep talk email reminded us “No one writes a good novel in a month. Good novels happen in the days, months, and years after the first draft—but I can promise you moments. Lots of little, magical storytelling moments that will either carry you into revisions or follow you into the next project. And those moments of treasure are worth all the heaps of trash.”  I love that!

I promised an answer to the question – What’s a pantser? According to the official Nomenclature:

Well, actually a started a tiny bit of a Plantser.  I had this storyline and a few key moments rattling around my brain.  That was part of the reason I decided to jump in and give this a try.

Those that know me well won’t be surprised that my novel is a romance.  I’m keeping it as a Christian romance – there’s a bit of Biblical wisdom in there, but mostly it means there’s no hot and steamy shenanigans.  So far, my hero/heroine haven’t even kissed.  Actually, they’re not much past the dislike-you-very-much stage so it’s not surprising :-).

If you’re interested in writing your own novel – this month, next, in a year, whatever … I would definite check out the NaNoWriMo website.

Apparently there’s also a Facebook page if that’s more your style, although I’ve heard during the month of November they try and get people to only use the website. I personally found a smaller group (for NaNoWriMo Bullet Journalers – another topic I hope to write about someday) that is active.  It’s been fun to read about other people’s successes, laments about lack of time or how their characters are just not behaving.  I find the latter hilarious :-).   Occasionally there are questions like “how did you and your significant other meet?” in the hopes it might spur someone’s story. A few writers are done already whereas some have barely made a dent.  But it’s more about the process. If you only end up writing 10,000 words, that’s still 10K more than you had when you started!!

There are dozens of sites that will help you if you get stuck with writer’s block.  Just search for “writing prompts for NaNoWriMo”.  You can find fun prompts like:

And for something else fun, Errol Elumir and Debbie Ridpath Ohi write a daily cartoon about NaNoWriMo call NaNoToons.   I love that even the cartoon is being a “pantser” this year … as well as the story within the cartoon.  Did you follow all that? 🙂

I’d love to hear if you’ve ever participated in a writing challenge like NaNoWriMo or if it’s something you’d ever consider!