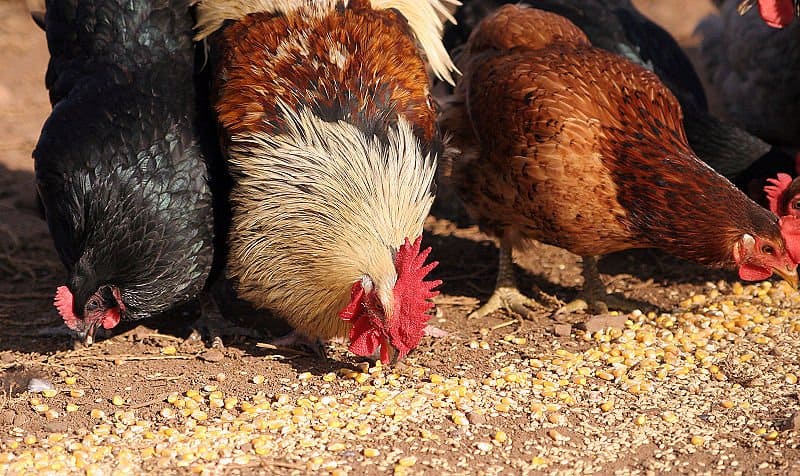 During the summer months, we don’t worry about feeding our hens much other than to make sure they have access to some commercial feed.  Most of the time, they are running around outside, “free-ranging” and eating grass, Mama’s plants (stay out of my garden!) and plenty of insects. 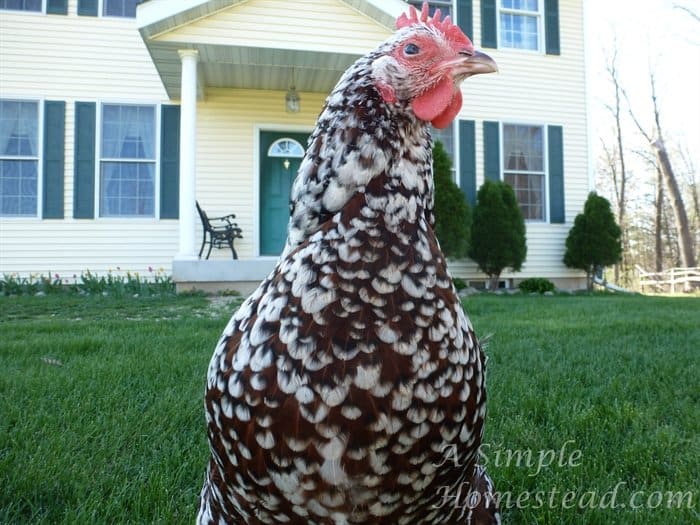 During our Wisconsin winters, they live mainly off commercial feed as we can’t find the ground under all that snow.  They do get table scraps. Everything from fruits and vegetables, to cooked meat, spaghetti (which they love) and other pasta.  Since we have a toddler who’s appetite can range from eating two bites per meal to everything in sight, I love that there isn’t a whole lot of food that goes to waste in our household.  Garden scraps are great too – tomatoes that aren’t quite perfect (or even better, have a worm in them!), over-abundant squash, blighted lettuce, etc.  I read someone saying that their chickens get awfully sick of zucchini by the end of summer.  Yeah, don’t we all?!

Speaking of feeding scraps – here’s a cute video showing how the chickens know what’s coming when Papa brings out the scrap bucket!


It’s also cute to watch them try and avoid walking on the snow!

We buy our feed from the local mill at a cost of $11.50 for a 50 lb bag.  The big-name supply stores also sell feed for a few dollars more.  Papa likes the local mill’s feed better because it’s a finer grind; they don’t spill as much on the ground so it seems to last longer.

There are different kinds of feed.  Baby chicks get a special blend of feed called chick starter.  Then there is a feed blend especially for laying hens that is higher in protein and good for your adult hens.  You may also find broiler ration feed in the store – that is also a high-protein feed meant for “meat birds”.

There are a few foods that you should not feed to your chickens:

You’ll have to pick up food and water dispensers.  Our feeder hangs from the ceiling of the run, as does the waterer so they are less likely to kick bedding and other unmentionables up into the dispensers.  You could also mount a waterer inside the coop if you’re concerned about it freezing during winter time.  They make water heaters for chicken coops as well.   You need to be sure they have clean water daily so they don’t become dehydrated. 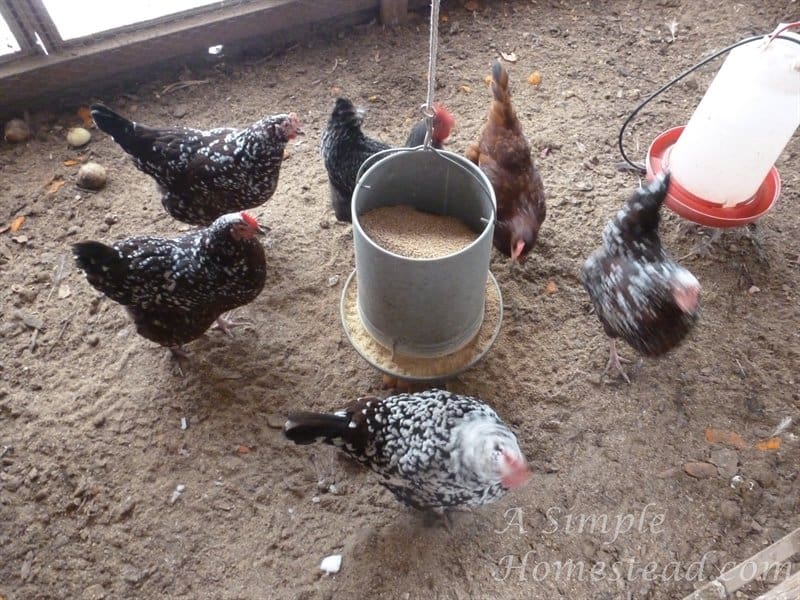 Egg shells contain calcium.  Hens need calcium to be able to lay eggs.  If they aren’t getting enough the eggs may end up with thinner shells, and worse yet, the hen herself may be depleting her own supply of calcium to lay eggs.  What’s the best calcium supplements? egg shells!  When you use your eggs, you can turn around and feed them to the chickens.  Some experts say it’s best to break them up so the hens don’t know they’re eating egg shells and start to peck at the ones that have just been laid.  You can also buy broken oyster shells and leave them in a container, or sprinkle them in the run for the chickens to peck at.

Chickens also need access to “grit”.  They use small pebbles they ingest to help mash up food in their crop.  You can use other bird gravel (parakeet / canary gravel) available at your local pet store.  Just place a small container where they have access and they’ll find it.

Treats (and ways to keep them entertained):

Caution: just be sure those foods listed above are used as treats and in small amounts.  They should not fed on a regular basis as some can cause problems.  Just like humans, moderation is key.

Here’s a tip.  We have problems with tent caterpillars in our area.  If you know what they are, they are a caterpillar that (as their name implies) builds a “tent” or web in a tree and practically demolishes that branch by eating all the leaves.  Many people spray their trees to get rid of them.  We’ve found an effective method is to remove the limb that is infected and drop it into the chicken yard.  The chickens scramble to get first bid on those caterpillars!