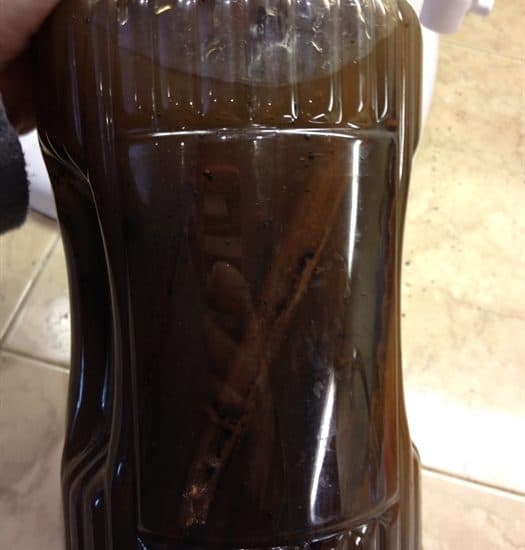 Have you tried making homemade vanilla yet? It is really quite simple and if you start now you should have some to give away by Christmas time!

Now why would you want to make your own Homemade Vanilla?

For our household, we go through a LOT of vanilla since Papa and I (and sometimes Little Chick) enjoy baking. I don’t know about you, but I never, ever measure the amount of vanilla that’s put in. Regardless of what the recipe says, it usually gets a couple of “glugs” LOL. I love vanilla flavor! So much so, if I have a choice between chocolate and vanilla – in most cases I’ll actually go for vanilla (as long as it’s good vanilla and not artificial).

You only need two ingredients: a mild alcohol such as vodka and vanilla beans. That’s it! 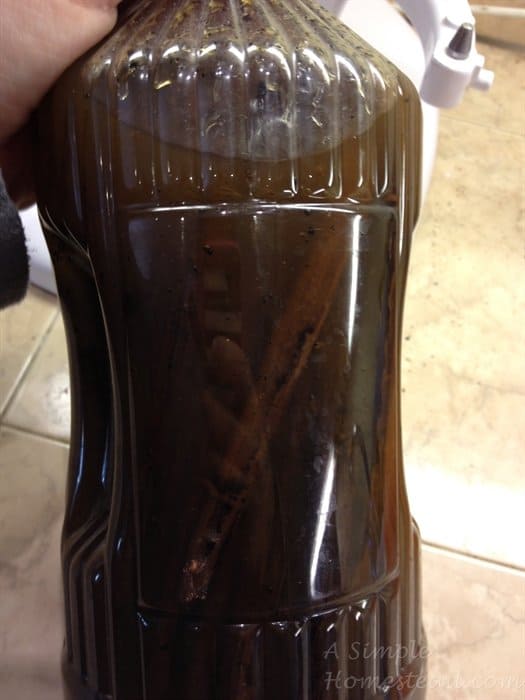 We’ve made homemade vanilla for the past 4 or 5 years. The first year we did a trial and made some in vodka and some in … um, I think it was a mild rum. The vodka won hands-down as having the better, more vanilla-y flavor.

If you want to make a lot, go pick up the larger size bottles of alcohol. I believe they are usually 750mL or 1.5 liters for the really big ones. Cost doesn’t affect the flavor – it’s only if you’re worried about what they’re using to make the vodka with. I usually go for a brand name I recognize that isn’t too expensive. I believe the last time I bought a big bottle I was able to find it for less than $20.

Then you need vanilla beans. Sadly, the price of vanilla beans has really shot up in the last year, which makes this a bit less cost-effective than it used to be. I usually buy my beans from Olive Nation.

I highly recommend signing up for their email newsletter so you can be informed when they have good sales. That’s how I saved on my last vanilla bean purchase.

How many do you need? I’ve seen advice on using 1 bean per ounce. That means you’d need around 50 beans for the 1.75 liter (~50 oz) bottle! I use a lot less – around 30 beans for the big bottle, 20 for the 750 mL. (I know the math isn’t the same). It’s worth it to try and get by with fewer beans. If the mixture ends up not strong enough for you the fixes are either 1) let it sit longer or 2) add more beans and let it sit longer. It’s not going to hurt anything to have those beans soaking longer. It’s only a problem if your in a holiday time-crunch.

So how do you make it?

When the mixture is ready, it will smell more like vanilla than alcohol. It won’t be as dark as some of the commercial varieties because most of them add colorant.

If you want the vanilla in smaller containers, just pour through a cheesecloth or coffee filter to strain the seeds. The first year I made homemade vanilla for gifts, I purchased some amber bottles from SpecialtyBottle.com. Every year since then, friends and family just show up with their bottles and I willingly refill them.

Given the current prices of vanilla beans, the cost breakdown can be up to $3 / oz so it’s not that much cheaper than purchasing pre-made vanilla. You might be able to find cheaper sources of beans and alcohol that will reduce the cost. However, last year when I was finished refilling everyone’s vanilla stash, I added some more vodka to the big bottle to top it off and let it sit for several more months. It seems to have developed nicely into a new supply – so I got almost twice as much out of that one stash of vanilla beans!

If knowing what’s in your vanilla is important or perhaps having a large stock on hand, this is a great, easy project to try!

Oh, and I almost forgot! When you’re finished using your vanilla beans to make liquid vanilla, strain them out of the alcohol, dry them out and throw them into a container of granulated sugar. In a couple of weeks you’ll have some lovely vanilla sugar – great for sprinkling on crepes or desserts, or even adding to your hot beverages!

I’d love to hear if you’ve made homemade vanilla and if you have any tips I haven’t covered.

This post contains affiliate links. I may receive a nominal amount if you purchase through these links. This post was not sponsored by OliveNation and all reviews are entirely my own.

No comments yet
DIY make-your-own vanilla