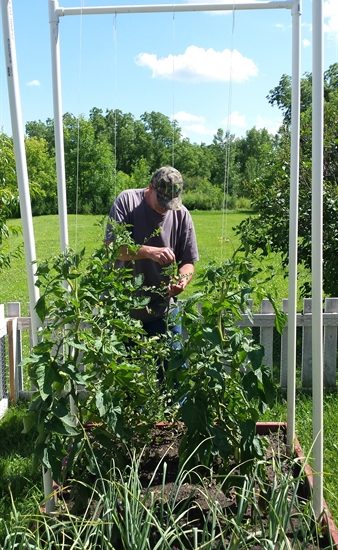 Much has happened in the last couple of months on our little plot of land!

The biggest news is Opal kicked the {grain} bucket. Opal was the only one left of our original batch of hens. She was older than Little Chick! A couple of years ago she started having leg issues, although we could never identify exactly what was wrong – just that she walked with a limp. Over the course of the last couple of months she spent more and more time sitting. Papa said she was losing weight and had very little muscle tone at all. Papa figured he might have to dispatch her before winter as it was unlikely she would survive.

A couple weeks ago we discovered she had “sour crop” or impacted crop. It’s basically a bacterial infection that occurs when the crop (part of the digestive system) doesn’t empty completely. I know there are things you can do to treat it, but in both cases we’ve experienced, we haven’t had success. She lasted less than 36 hours after Papa realized she was sick, so she went quickly.

Because of her lameness, Opal got used to us picking her up, carrying her around, stroking her, etc. I doubt she laid more than one egg a month anymore, if that! She really had become a pet. Little Chick was devastated; it was the first time she really remembered losing one of our animals. She was too young when Charlie died and the other chickens weren’t this “special”. We kept one of Opals feathers for her as a remembrance.

In other news, our garden is all cleaned up. Good thing too because we had our first hard frost on Monday night!

By mid-summer we only had a few plants in our garden: tomatoes, peas (for the pea-snitcher) and potatoes, along with the garlic we planted last fall.

Papa tried a new method for growing the tomatoes this year.  He’s always hated those flimsy wire cages for tomatoes, so this year he built a PVC frame and hung thick string down that would allow the tomato plants to climb up and be supported vertically.  Every couple of days he would go out and wrap the top of the plant around the string and lop off any suckers trying to grow sideways.  This system worked really well!  He had to add more string a couple of times as some of the plants were producing HUGE tomatoes and they got heavy.

We had 5 tomato plants – which kept us well supplied with fresh tomatoes during the summer.  We didn’t have much over-production, although twice Papa cooked and strained batches of tomatoes to make pizza sauce.  Next year we may just have one or two larger tomatoes, but I want at least 2 (maybe more) of the Sun-Sugar Cherry tomatoes!  They are a yellow cherry tomato that are super-sweet.  I’ve been buying these heirloom plants from a local producer the last few years, but he only sells a handful of plants each year.  Even with our good production we still ate them faster than the plant could produce.  This year I got smart and saved some seeds so hopefully we can create several of our own plants!

We have a box full of garlic downstairs waiting to be used up.  There’s enough there I’m wondering if I should try and dehydrate some so it doesn’t start growing or spoil.  (This wasn’t all the garlic.  I’ve been liberal in my use of it … I love garlic 🙂 )

We dug up our potato harvest quite early – in late August.  They were plenty big enough even then.  From our two beds of plants we had a full 5-gallon bucket filled with potatoes of various sizes.  The ones above were average-sized.

Papa also planted potatoes where the old chicken run used to be.  The plants looked BEAUTIFUL.  Alas, we had zero potatoes from that patch.  I think with all the trees around, it just didn’t get enough sun.  It was worth the experiment to try…

Our only true failure this year were the apples.  The Honeycrisp tree produced blossoms but no apples.  The other tree where we’ve had good luck before was decimated by bugs.  The Japanese beetles were horribly thick this year.  We set traps.  We hand-picked them off the plants.  We even got the chickens used to having us shake the tree so they’d fall off.  They loved that and caught on quick that tree-shaking meant a bounty of bugs to snatch up.  Now, we’re seeing other bugs attack the fruit… wasps, Asian beetles, box elder bugs, etc.  The tree started off FULL this spring.  Now there are only a few dozen apples left on the tree.  Papa picked one the other day and it was hollow.  Nothing left on the inside – just the skin around holding it together. 🙁

As much as I’m enjoying the brief warming, I’ll be happy to see the cold weather appear to eliminate the bugs.

Are your gardens all cleared out? Are you ready for the change in seasons!?  Let me know…