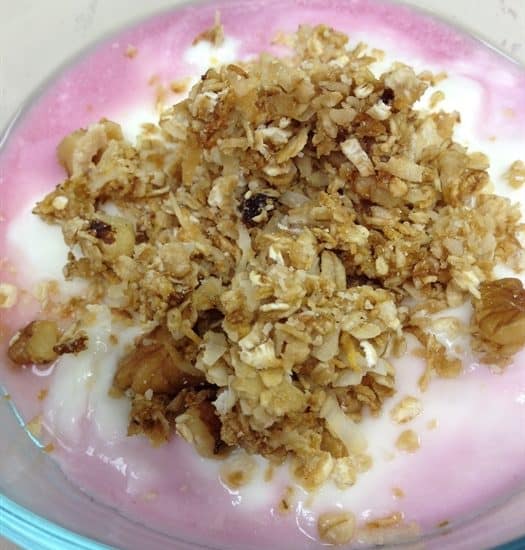 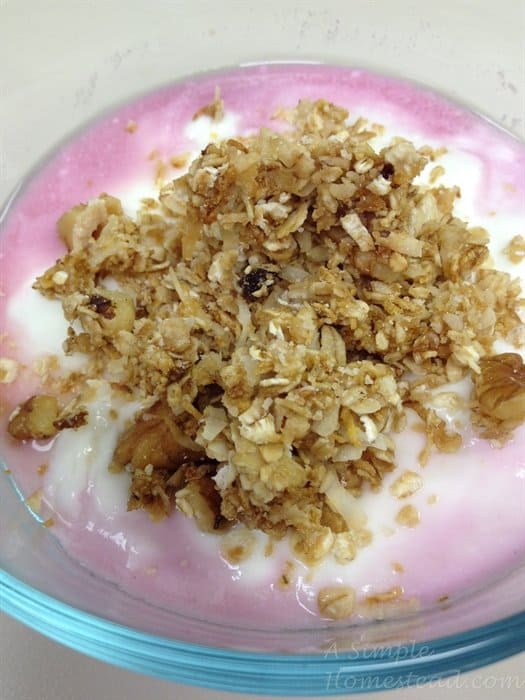 I don’t remember seeing yogurt in our household growing up – until my mother discovered in her 40’s that she was lactose intolerant. Odd thing for a woman that grew up on a dairy farm, but there it is. She had a countertop yogurt maker much like this one. 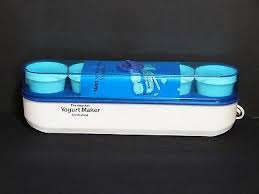 As a teenager, I remember not caring much about the yogurt that was made.  Personally I thought it was weird and I preferred my yogurt much sweeter and in frozen form! Years pass and tastes change and I now enjoy thoroughly yogurt.

For years I bought a certain brand that was low in calories and has recently switched to “aspartame-free” … but it’s still full of artificial ingredients, including sucralose (aka Splenda).

I’d read that yogurt was fairly simple to make but it took a while to get over my reluctance to try since most “recipes” were several pages long.  I’ve learned they’re just there for instruction – it really is quite simple once you’ve made it once.

What I’m sharing today is a compilation of several recipes I’ve tried along with some hints on what I learned.

For food supplies you really only need milk and an active yogurt culture. The milk can be skim, 1%, 2% or whole – but I’ve found that 2% or whole milk make a thicker yogurt. You can purchase yogurt cultures at a store, but when I’m starting out I just use a little bit saved from a purchased unflavored yogurt. The next time you make yogurt you don’t have to purchase again, just use a little saved from your previous batch! When purchasing yogurt look for the words Lactobacillus bulgaricus or Streptococcus thermophilus on the container – those are active cultures.

Start by placing the milk in a heavy pan over medium heat. The milk needs to heat up to 180°F to kill off any existing bacteria. If you don’t have a thermometer, you should be able to spot this temperature as it just begins to form bubbles as in the picture below. 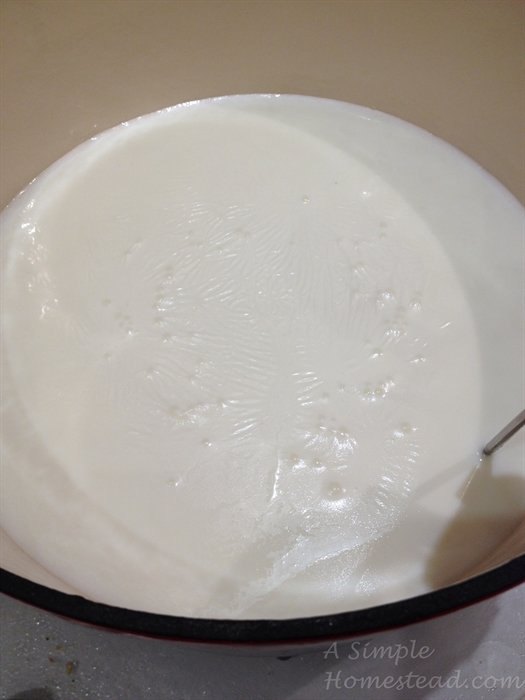 This will take a while as you don’t want the heat so high that you begin to scorch the milk. Slow and steady will get you there in good time. The last couple of times I’ve made yogurt, I’ve set the pan up on the stove, stuck the thermometer in and gone about my business doing other things. No stirring. No constant monitoring; just a check on the temp every once in a while. If you’re prone to walk away and forget things like this though, you could always set a reminder timer every 10 min or so. 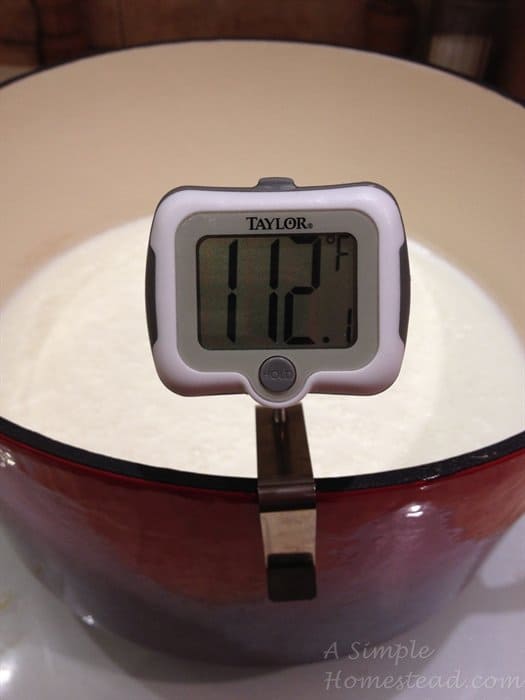 After the temperature has reached 180°F, turn the burner off and let it rest, cooling down until 115 – 120°F. Again, I just check every few minutes. Go clean up the kitchen, make your lunch for the next day, or paint with a child :-).

Since I don’t stir my milk as it’s heating, it usually forms a light film on the top of the milk. I want to be sure I have smooth yogurt, so I usually just skim off this film and put it in the chicken scrap bucket. 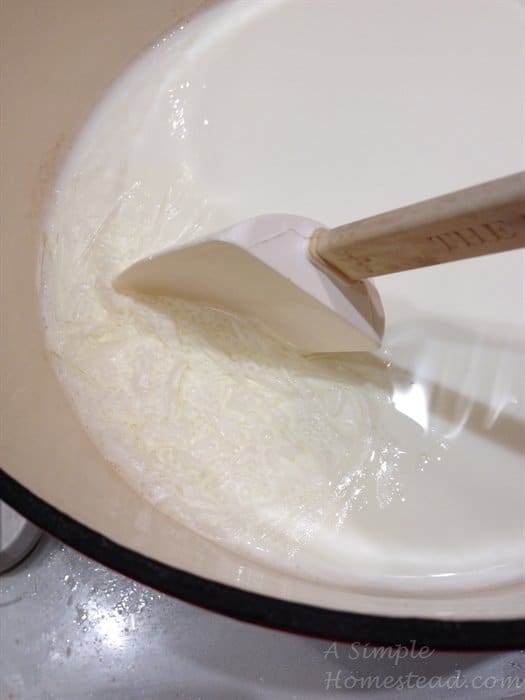 Next comes the difficult part. Are you ready? Take approximately 1/2 cup of the heated milk out of the pan and stir in a small amount of yogurt with active cultures. Then return the 1/2 cup of milk to the pan and stir for a few seconds to be sure it has been incorporated.

How small an amount of yogurt do you need? For the 2 quarts of yogurt I make at a time, I only add 1 tablespoon!  That’s it.  Adding more culture will not make a thicker end-product; in fact it will do the reverse. I’ve heard the little yogurt cultures like lots of room to run around in and thrive in a less populated area. 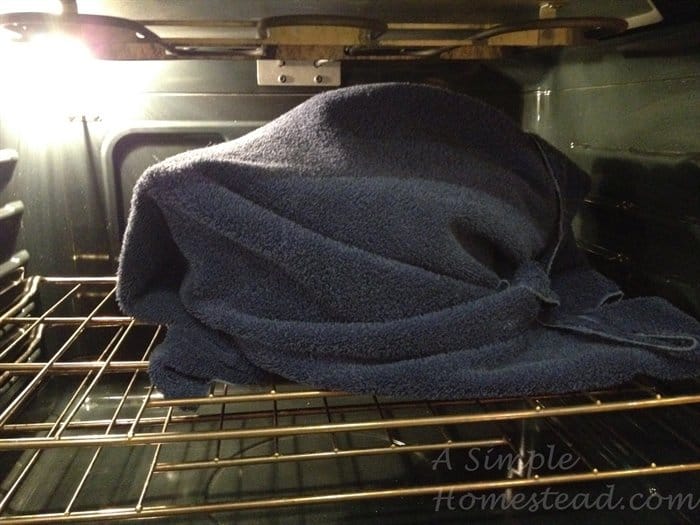 Once the yogurt is mixed, wrap the pan in a towel or two and place it in your TURNED OFF oven, but put the light on. The light will help keep a bit of warmth in the oven; much like you would do for raising bread. If you have a gas oven, you may be able to use this method for yogurt, but I would test the interior temperature with the pilot light on to be sure it isn’t too hot.  I’ve also heard it’s possible to place your yogurt on an electric heating pad overnight so that’s a possibility too.  Ideally you want to keep the temperature of the yogurt right around 110°F for several hours.

How long to keep the yogurt in there? “It depends”. Some recipes I’ve read recommend checking after 4-6 hours as it will get tangier but thicker as time goes on. I usually make this later at night (7-8pm) and leave it overnight, pulling it out 10-12 hours later. It doesn’t seem any tangier than other yogurts I’ve tried.

As you can see, I get a nice thick yogurt with a little bit of whey. You can try and skim this off or even put it in a strainer with a coffee filter on the bottom to make Greek yogurt. I just skim what I can with a spoon. 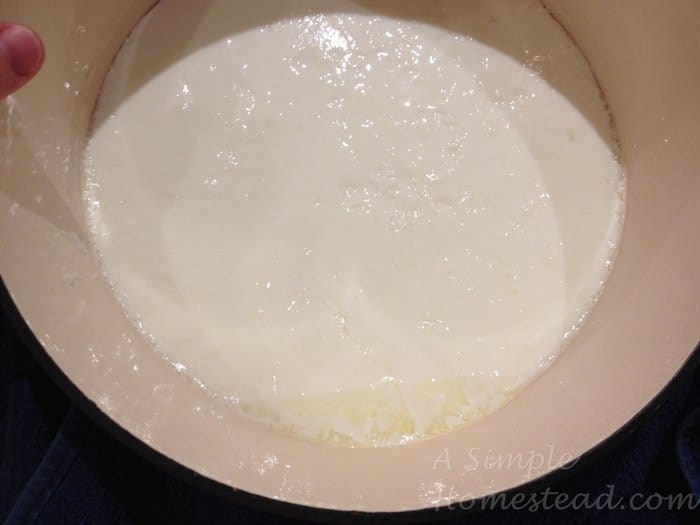 Homemade yogurt isn’t going to be as thick as most store-bought anyway because many brands add pectin, gelatin or other ingredients to artificially thicken their product. I’ve gotten used to the somewhat pour-able consistency.

I do end up with a little browning of the milk on the bottom of my pan because I don’t bother stirring it. As long as it isn’t scorched to turn the flavor off, to me it’s worth the reduced amount of work of having to stir for a long time. I just don’t hard-scrape the bottom when I’m transferring to my containers. 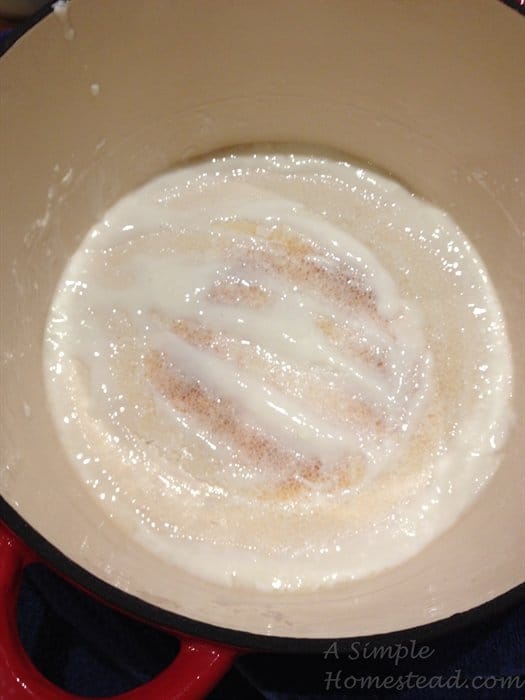 Another thing – I don’t sweeten my yogurt at all so I don’t have any experience with that, but I’ve read it’s recommended you sweeten after you incubate. I take my yogurt to work with frozen fruit at the bottom of the container and mix it up; by lunchtime (usually) the fruit has thawed. This probably thins my yogurt even a bit more – but unfortunately it’s the wrong time of year to look for fresh fruit to add! 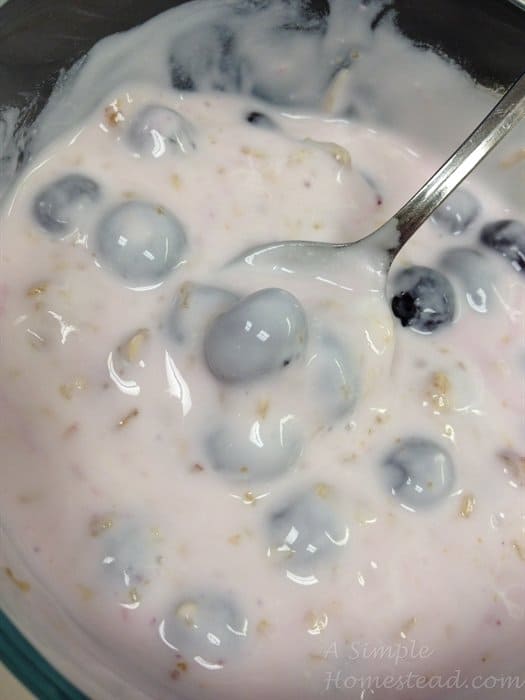 The fruit adds enough sweetness that I have found I don’t need any additional sweetening agents.  I do the same with oatmeal and dried fruit now too, but that’s another story…

So what do you do if your yogurt doesn’t thicken? First of all, if you’re checking at the minimum time, let it sit longer to be sure it has time for the cultures to work. Also, make sure you used yogurt that had active cultures. I’ve that if it still doesn’t thicken after 12 hours you can repeat the steps (heat to 180°F, cool down and add more culture) to attempt to save it, but I don’t have any experience trying that.

In the multiple batches of yogurt I’ve made using different recipes, I only had one serious failure.  That recipe used a heating pad with towels to incubate the yogurt; I may not have had my heating pad up high enough but also the recipe called for 1/4 cup of yogurt culture per quart!  That probably was the culprit in its inability to thicken.  At the time, I didn’t know that I could try and salvage it, but the chickens got a treat (yogurt is good for them too).

Next time, I’ll share with you the granola recipe I used to top my yummy blueberry yogurt! 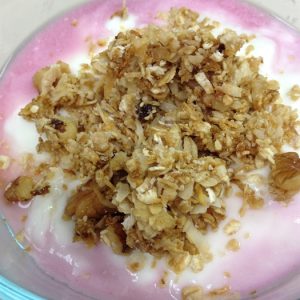 One Reply to “Homemade Yogurt”