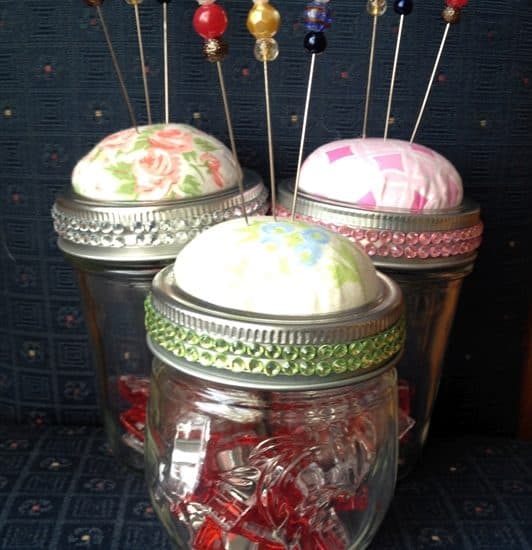 I have one final Christmas project to show you! And then I’m done with 2014 – I promise 🙂

Each year some crafty friends and I make something special for one another. Two of them are exceptional crafters so sometimes it’s a little difficult figuring out what to make. They’re all sewers so this year I thought pincushions might be a great idea.  They turned out rather cute! 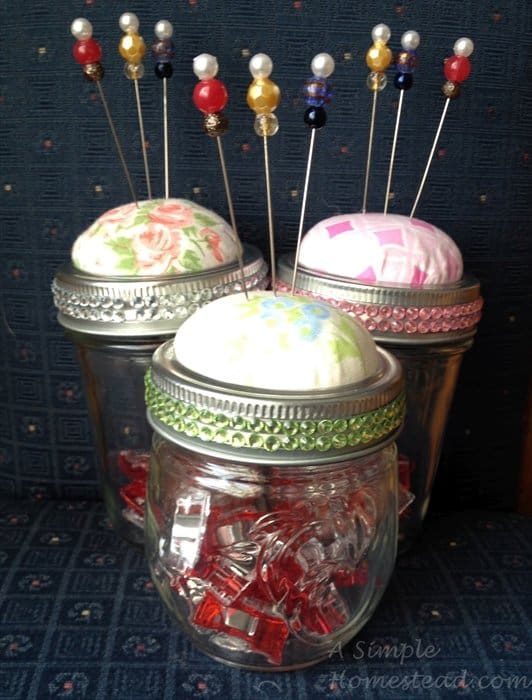 The supplies I used for this project included:

First, a confession. I did not put all those little rhinestones on the sides of the jar rings. I just happened to spot those blinged-out rings near the wedding supplies at Michael’s and thought they’d dress up the jars nicely. If you wanted fancy rings you could try decorating or spray painting them yourself, but plain ones would work just fine.

I read several tips before I started and many talked about using some sort of abrasive substance in the pincushions. This is done so when you push in and pull out the pins, they are automatically sharpened. One such suggestion was to use ground walnut shells. It wasn’t until after I purchased my shells online that I read that it’s the same substance that is often used in hamster bedding and you can pick it up a lot cheaper at pet stores. Another option I read about was to use a steel scrubbing pad. Most of the pincushions I’ve encountered seem to have a sand-like substance so I’m guessing they use walnut shells.

That walnut shell “powder” needs a home, so your first step is to make a little pouch. 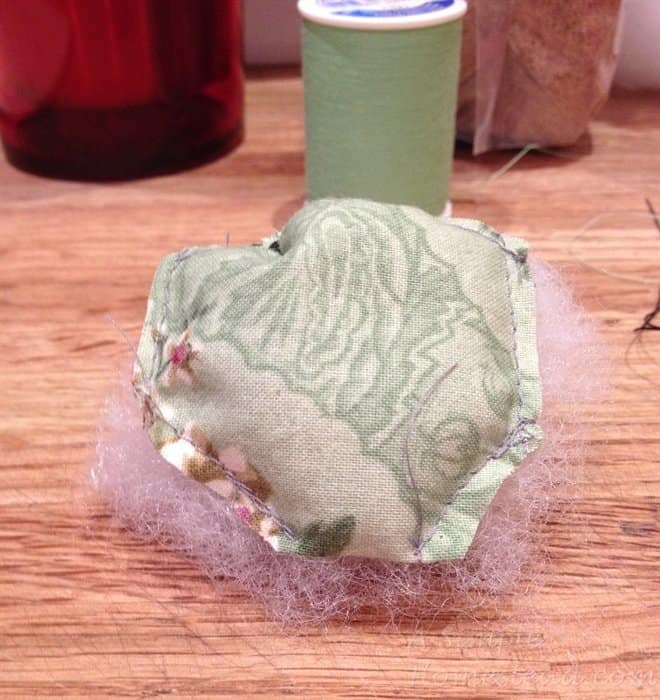 Don’t judge the round-the-corner sewing skills. I didn’t care if it was terribly neat as no one will ever see it.

I just cut two circles the size of the metal lid and sewing them together almost all the way around. Then the walnut substance was poured into the pouch and the final section hand-sewn together so nothing comes out.

Next you’ll cut the main circle – the one that will show on the top. The circle I cut was approximately 2″ wider than the circumference of the jar lid. To make it easy on myself, I used the top of an oatmeal canister to draw a circle in pencil on the fabric. 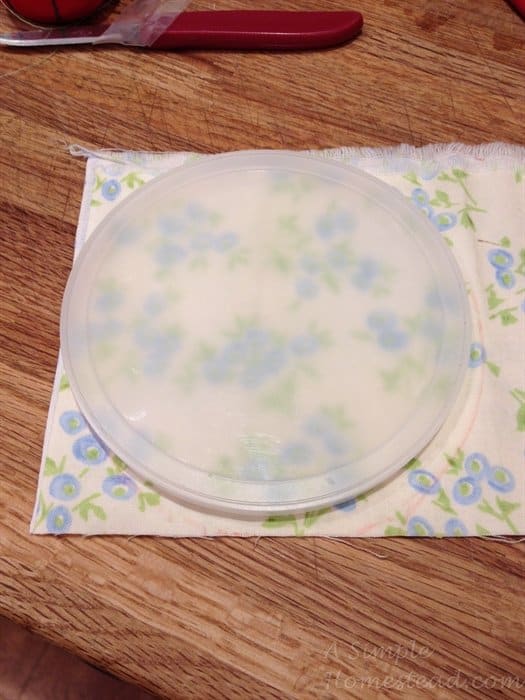 At this time it might be best to cut one more circle, just slightly smaller than the size of the jar lid. Set this off to the side for later.

Place the large circle, face-down on your work surface, followed by the walnut shell pouch, and finally a small amount of fiberfill. The fiberfill helps to keep it up off the lid and fills in the area so you don’t have to have a perfect pouch for the abrasive. Since the pouch will be on the top, the pins will always go through it first. 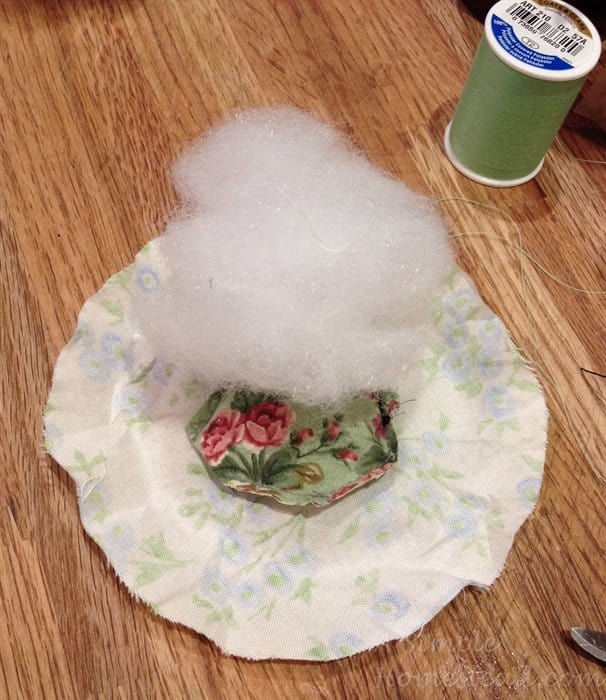 Next, take the jar lid and place it top-side down on the pile. Begin pulling the sides of the fabric up to the bottom-side of the lid and hot-glue it down, keeping the fabric taut. 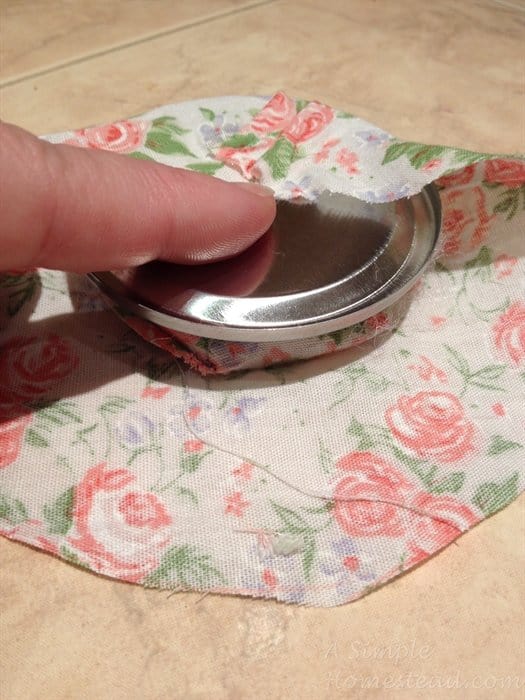 I found it easiest to glue one little section, wait for the glue to harden a bit, and then glue the next fold.

Don’t worry too much about how neat it looks as you’re gluing. It’s more important to watch and make sure there aren’t isn’t a lot of excess fabric bunching up along the sides of the lid. That could cause issues in trying to get the ring on later.

Now we get to “clean up” the bottom of the lid. Hot-glue the last circle – the lid sized one over all the folded ends with the right side of the fabric facing out. 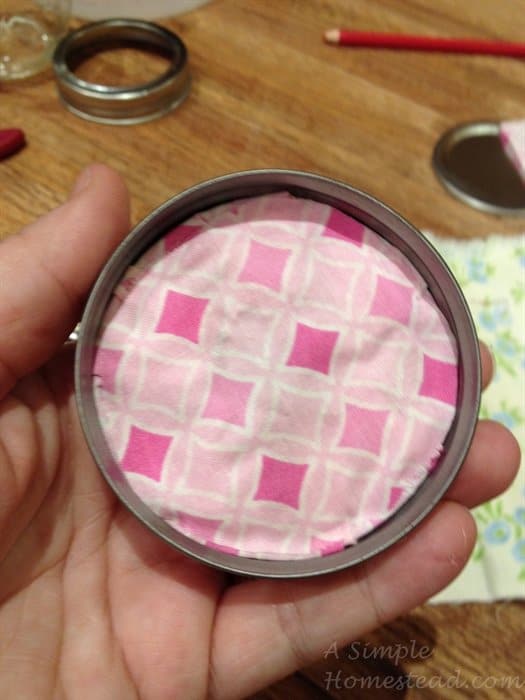 I had thought about making a fabric yo-yo and gluing that the bottom, but 1) I’ve never made a yo-yo before and 2) I was running out of time.

I would advise waiting until all the hot glue has completely solidified before attempting to put the ring around the lid and try it on the jar. You don’t want to accidentally glue the lid down – unless you intend on never opening it! 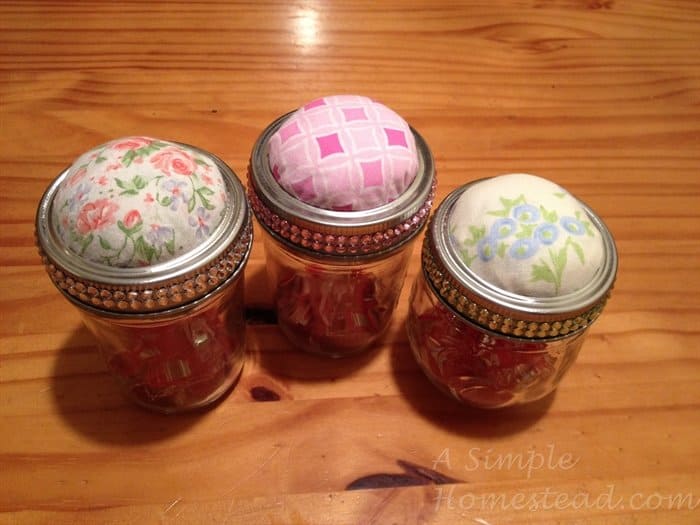 The pins were probably the easiest part of the process but they dressed up the pincushions so nicely. I used 3-inch corsage pins but you could go shorter. It all depends on how many beads you plan to use. I have a stash of beads thanks to my jewelry and stitch marker attempts. For these, I just used regular craft glue. I put a dab of it on the pin shaft below the pearl on the end and slid the bead into place, holding for just a few seconds. Then I added the next bead. When all three were in place, I carefully laid them down at an angle so the pointed end was up. That way the beads wouldn’t slide down while they were drying. The nice thing about the craft glue is after it dries, you really can’t see any excess.

The recipients all raved about how wonderfully they turned out. I purchased a package of Clover Wonder Clips that sewing bloggers keep raving about and split them between the jars. Alright, I’ll confess – I kept a few for myself to try!

My biggest problem is that even though I used up some stash – fabric and beads, I now have around 1.75lbs of walnut shells and 135 corsage pins left over! Maybe I need to go into the pincushion business … but then I’d need more jelly jars! sigh it never ends 🙂

What do you think? I’d love some feedback!