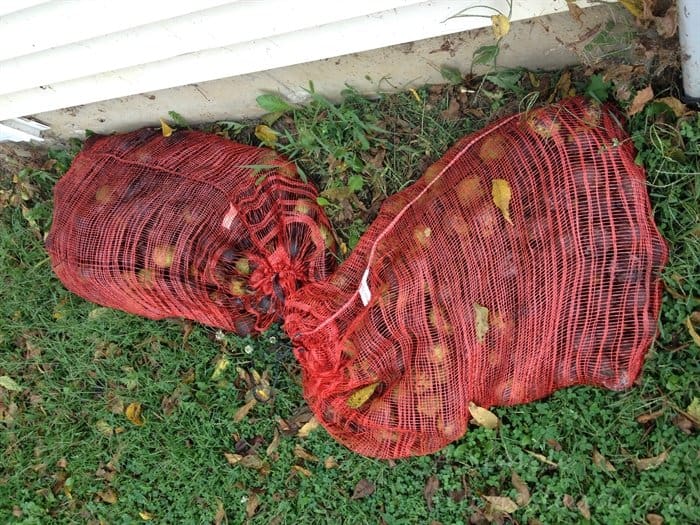 I know I’ve mentioned that our back yard is full of black walnut trees.  Most of the time we find they are a pain in the (#@X.  They are the last tree to grow their leaves in the spring, the first ones to lose their leaves in early fall (August!), and for most of the the fall months we hear the constant thud of walnuts falling.  Although I realized this year that the rhythmic falling we were hearing wasn’t due to the wind; it was squirrels that would run from branch to branch to drop them :-).  Black walnut is a great hardwood, but most of our trees aren’t large enough to fell for that reason.

The biggest problem with black walnut trees is their toxicity.  The trees produce a chemical called “juglone” which is toxic to many plants.  That is why we needed to move one of our apple trees last year.  The roots and nuts contain the most juglone but it’s also found to a lesser extent in the leaves and stems – so you can’t even compost or mulch with them!  My rhubarb didn’t do so well this year so I think even that is being affected.  The only plant that seems to do ok in our backyard are the hostas.

And cutting them down isn’t necessarily a good option for the short-term, because the roots still emit that toxic chemical for years to come.

That said, there is one small redeeming quality (outside of the wood itself) … the nuts.  Black walnuts taste completely different than their cousin, English walnuts. They are sweeter and I think they have almost an apple aftertaste. 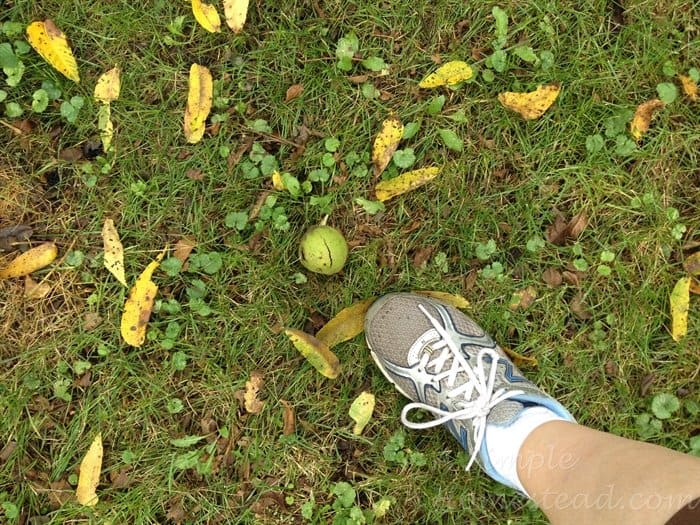 The black walnut trees produce a bumper crop usually every other year, unless we have a drought or some other weather calamity. This year was a bumper year.

I was reluctant to sit on our deck for the last couple of months – those walnut hulls / nuts are not exactly small.  Papa says they don’t hit as much force as it sounds, but they create quite a thud on the deck! 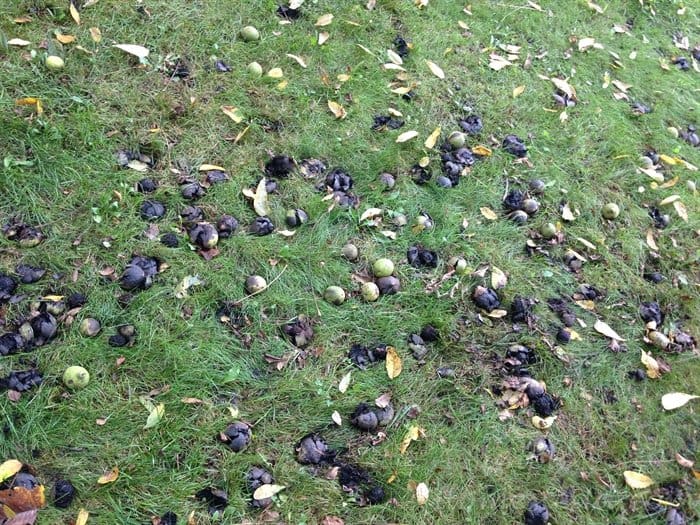 There’s a reason why you won’t find black walnuts on your grocery shelves anytime soon. They are very difficult to harvest. Oh, collecting the “fruit” is easy – it just falls to the ground. And as I mentioned, squirrels often help you.

It’s pretty easy to gather them up by raking or just walking along and putting them into bags. Except even this part can get messy. 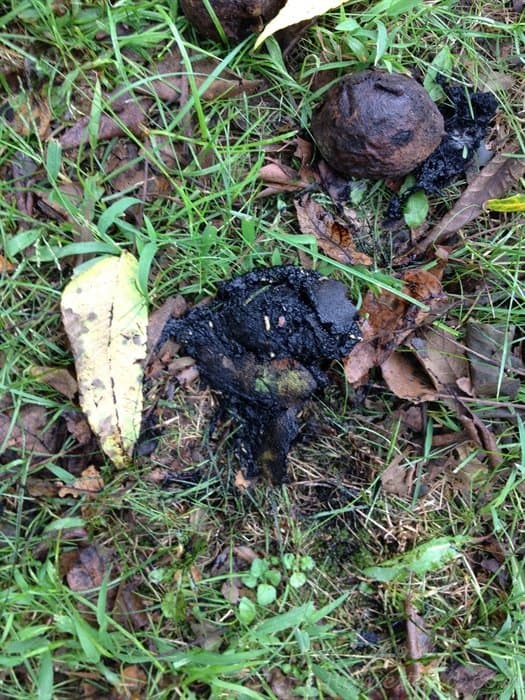 As soon as that fruit of the tree hits the ground, the outer hull begins to decay … and makes everything BLACK. I haven’t looked it up, but I’m guessing that is why this tree is called the black walnut. You touch it – with your hands, clothes, etc. and they will all get stained. Which means it makes a wonderful dye, but only if that is your intention.  It’s best to wear gloves and old clothing. 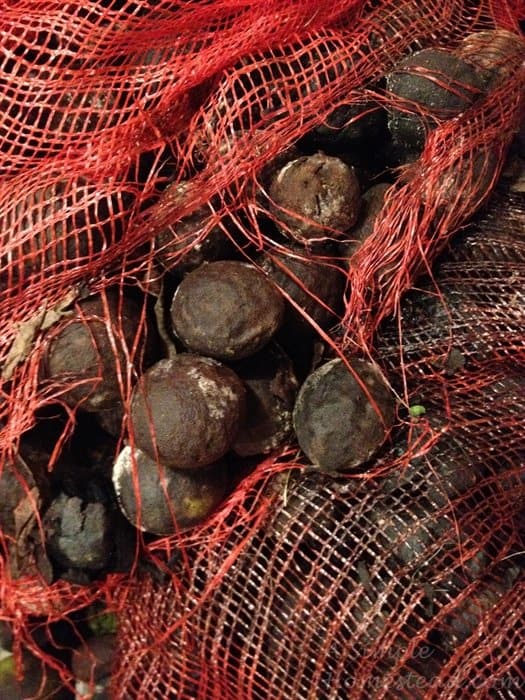 Papa puts them in old feed sacks and lets them sit for a while – secure enough that critters won’t steal our bounty (believe me, we left plenty for them too) but in an area so air can get to them and continue the decay process. After they’ve sat for a few weeks, Papa has been known to throw the bags out into the driveway and run over them with the truck a few times to help break up the hulls.

Once the hulls are gone and the shells have dried, the risk of transferring the black dye to your hands is reduced. Then comes the really “fun” part. Getting the nut meat out!

First is cracking the shells; these are some of the hardest known to man. I’ve seen official nut crackers meant for black walnuts – that usually cost several hundred dollars. Papa just uses a vice in his woodworking shop. Then you have to pick out the meat. I’ve never seen nice big chunks like you get with English walnuts – they’re all little pieces. This is probably why most people don’t bother with black walnuts. Or if you do find them in such places as farmer’s markets, why they command such a high price. They’re extremely labor-intensive.

Papa doesn’t seem to mind. It’s an escape for him to hide down in his workshop for an hour or so at a time in the cold winter months, breaking shells, picking nut meat and bagging them up. I think he gets a whopping 1/4 – 1/2 cup in one hour’s time, but they are delicious in homemade fruitcake 🙂

Kept inside the shell in dry conditions, the nuts last a long time.  We still have a few left over from 2 years ago (the last bumper crop) … once you break open the shell they taste as fresh as the new crop!

Have you ever tried black walnuts; if so, what did you think of them?