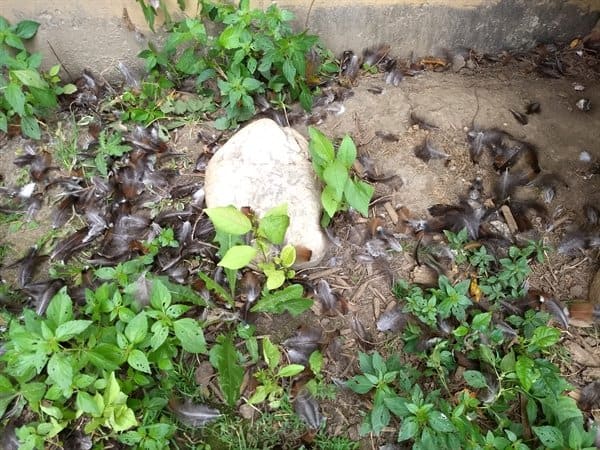 Disclaimer: The links below may be affiliate links. If you purchase any products after clicking on these links, at no additional cost to you, A Simple Homestead may receive a small commission for making you aware of these important resources.

Earlier this month our daughter and a neighbor girl came in from playing outside, wondering if the pile of feathers they saw was normal.  No, my dear children, this is not normal!

Papa immediately went searching for our hens.  We only have the five left and would hate to lose anymore, but after a quick search, he was concerned that we might have lost not just one but two chickens!

He could find Blondie (front center) and Brun (Norwegian = brown) and one of the Speckled Sussex: Brownie (far right).  Missing were Charlene and Oreo.  The three Sussex are sometimes difficult to tell apart but Brownie has the least amount of spots and Charlene has one odd white feather on her right side.

I talked about Charlene in the past – she was so named because for a while she kept trying to crow – just like in this book – which is one of our favorites!

(except that Charlene wasn’t a hen – he was a rooster!)

Anyway… back to the feathers story.  Papa knew that when a predator attacks, the hens can get pretty scared so you can’t just search their normal roaming areas.  One year when we had a major predator problem, he found one hen (alive) way down at the neighbor’s driveway!  There was a trail of feathers leading towards the backyard so that’s where he started.  He eventually found them – both of them (whew!) in the woods.  Oreo was easier to coax back towards the coop, but Charlene wouldn’t budge.  She was too terrified to leave the safety of the underbrush.

Fortunately, they are good little hens and when it started getting on towards dusk, she headed home.  Once they were all in the coop, Papa was finally able to get a look at her.  There was a section of her back that was completely stripped of feathers and there was one large, deep gash.  Papa figures it must have been a bird of prey that tried to get her and somehow she was able to fling it off her back or something scared it off.  A ground predator, like a fox, would have just carried her off into the woods still alive.

Now the big question was – what should we / could we do about her injuries?  Limiting was the fact that just a few days later we would be headed out for an extended weekend camping trip.  So no babying Charlene for days on end.  (We just leave extra food and water for the chickens on such occasions; they do fine – except they miss being able to free range).

Papa finally decided to try and clean the wound as best he could, he squeezed a lot of Neosporin (antibiotic ointment) into the cut and placed a large bandage over it all.  Truthfully, I was worried because the last time we had a deep wound injury like that, the hen didn’t survive – but that was due to a raccoon bite.  I was hoping an aerial predator might be “cleaner”.  Two days later, we left on our camping trip…

Sunday afternoon came, we returned and Charlene was not only alive, she was acting her normal self again!  The bandage was only partially covering the wound at this point.  Papa could see that a scab had formed and it looked like it was healing (no weeping).  We left the bandage there as it might have caused more damage trying to pull it off the feathers.

Besides … now all the hens are in molting mode, so those feathers will most likely fall off if the bandage doesn’t before then.

So now our “issue” is that we aren’t getting any eggs.  Molting takes energy from the hens so they don’t have enough to spare for  laying.  Given the appearance of our garage floor, they are all molting at the same time!  Papa complained last night that he’d just swept it out … but then again, he’s the one that leaves the doors open :-).

I read this article and this one yesterday about helping your chickens by offering them high-protein snacks.  So today I picked up a bag of mealworms from our local farm store.  Between those and the bugs we collected over summer, they should get plenty of protein.  Despite the article mentioning giving the chickens eggs, I am NOT going to buy eggs for chicken feed!  It’s bad enough we have to go buy those pale, tasteless things for us to eat! LOL

No comments yet
chickens predators